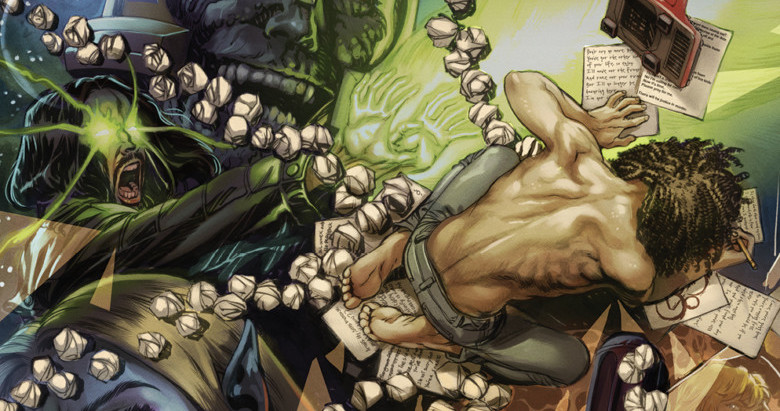 Sometimes the most difficult reads can be the most rewarding. This is definitely the case with THE AMORY WARS: GOOD APOLLO, I’M BURNING STAR IV #1. Even the title of this book is daunting. However, this issue is definitely worth the deep dive.

READ: Want some more background on this series? Take a look at our THE AMORY WARS analysis!

THE AMORY WARS is an ongoing series that accompanies the similarly titled album by the band Coheed and Cambria. The band’s frontman, Claudio Sanchez, originally created the series. This issue was written by Chondra Echert with art by Rags Morales.

THE AMORY WARS So Far

This ongoing series tells the story of Claudio Kilgannon, a super-powered man with a messianic prophecy to live up to. Claudio is training with his guardian, Ambellina, in order to defeat the evil galactic dictator, Wilhelm Ryan. THE AMORY WARS is complex Sci-Fi that relies heavily on worldbuilding and an ongoing story. Imagine starting Game of Thrones in the middle of Season 4 with absolutely no context. As a first time reader, there is not much information in THE AMORY WARS: GOOD APOLLO, I’M BURNING STAR IV #1 to grab onto. However, it did lead me into the fascinating back catalog. 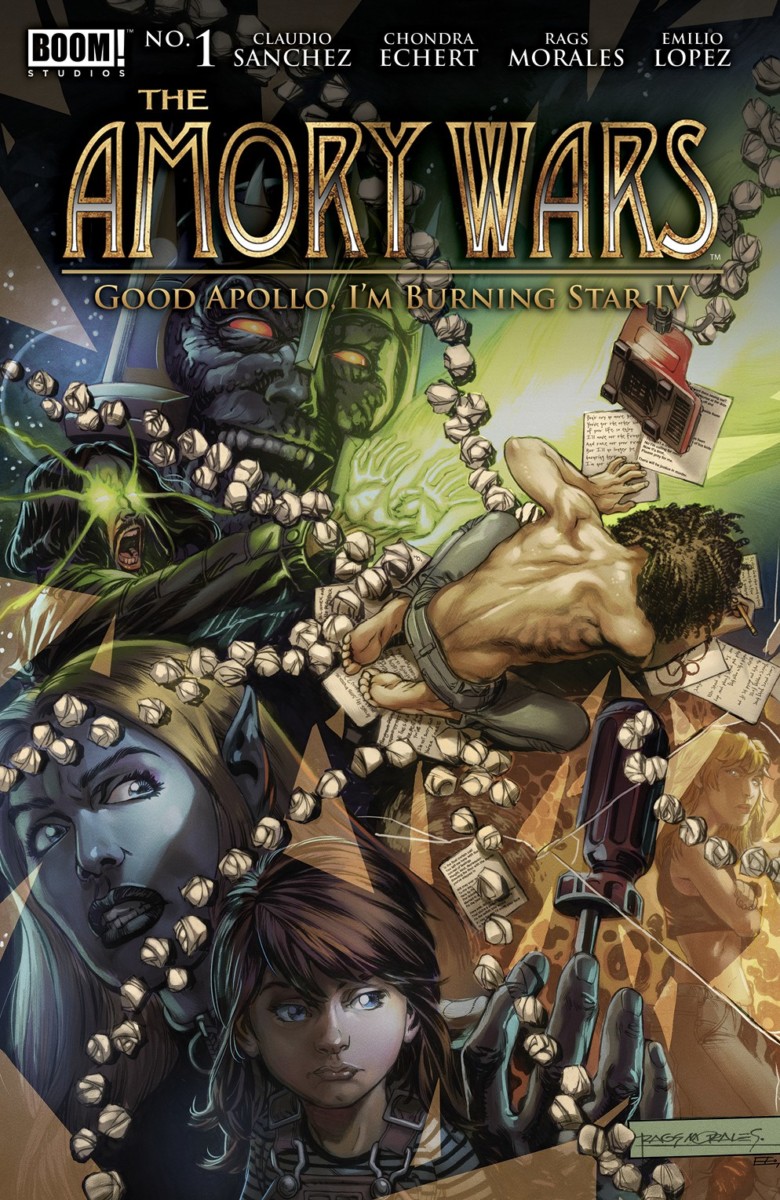 READ: Here’s why we believe V FOR VENDETTA gave us a transgender anarchist hero

THE AMORY WARS: GOOD APOLLO, I’M BURNING STAR IV #1  is convoluted and requires a thorough knowledge of its universe. However, it is still immensely enjoyable for new readers. The sci-fi art is gorgeous and has the feel of a classic pulp novel cover. Morales juxtaposes smooth, moody shadows and realistic looking characters, with bright pulses of light and energy. There are constant close-ups that are eerily realistic and human. The transitions from dark to light and low-to-high emotion help the panels flow and make for an enjoyable mosaic on every page. Morales’ sci-fi imagery is grungy and interesting looking, without trying to mimic a more popular sci-fi franchise. It is refreshing to see a creator not rely solely on STAR WARS visuals for a more grounded sci-fi universe. Morales’ design is a little bit more twisted and demonic than your average space epic.

Morales should also be commended for his ability to create a distinct sense of “place” in the visuals. The story jumps to multiple locations, which can normally be hard to follow. So many comic book creators choose to go with the confusing solid-colored backgrounds, rather than fleshing out the world behind the characters. Morales really takes care to make every setting feel like an actual place, rather than just a stage for the action to occur. There is enough vivid detail in these images to warrant multiple readings. 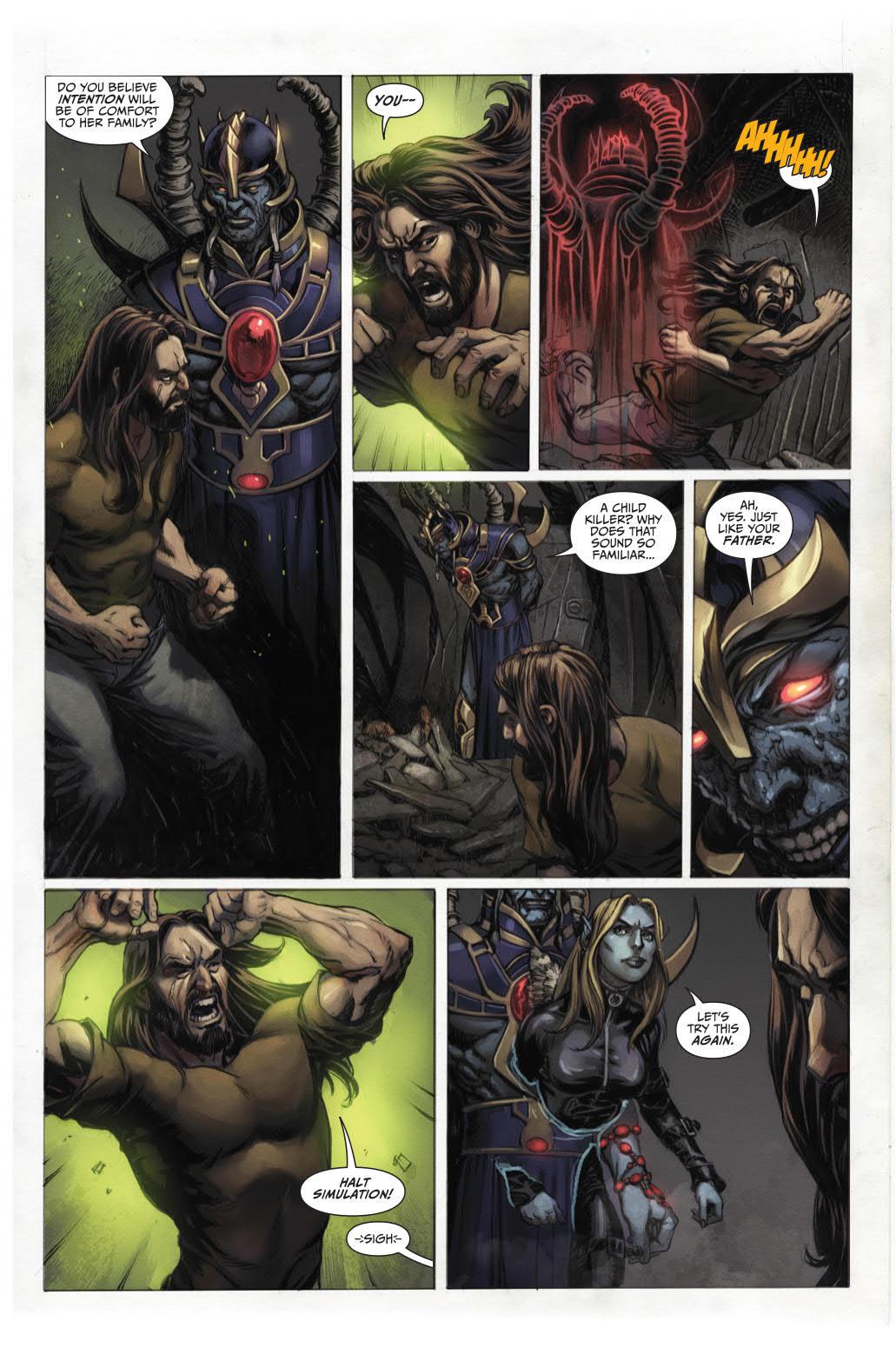 THE AMORY WARS: GOOD APOLLO, I’M BURNING STAR IV #1 adds a new subplot to THE AMORTY WARS story that may be inaccessible for new readers. This issue introduces a writer named Ryder. This character is living in our reality but is somehow connected to the world of THE AMORY WARS. There are subtle hints that connect Ryder’s emotional turmoil and writing to the Claudio Kilgannon storyline. Echert does a great job of hinting at these connections without being too heavy handed. The exact nature of the writer’s relationship is unknown. The idea of a Stephen King-like character who inserts himself into his own stories (there is definitely a DARK TOWER vibe in this issue) adds a new spark to this series.

READ: Looking for something different? Here are our thoughts on social issues TEEN TITANS needs to discuss

Echert is great at writing naturalistic and haunting dialogue. This issue doesn’t pull any punches. The emotions are high. I felt like I was listening to real conversations, not just reading typical comic book dialogue. However, the writing does little to ease the new reader in. There is not much expository dialogue. This is great for longtime fans, but may be daunting for new readers. I also found that in some sections Echert may have been a little too verbose. The pacing of the comic suffered from too many awkward patches of extensive dialogue. It is strange to have so much language and still feel that I don’t know these characters. Since it is the first issue, it makes sense to give a little taste of what’s to come. However, I would have preferred if more personality came out in the dialogue.

THE AMORY WARS: GOOD APOLLO, I’M BURNING STAR IV #1 is the best kind of immersive sci-fi lore. It is deep and extensive, with thousands of pages of previous material to keep new fans interested. I highly suggest using this issue as a litmus test to determine whether this series is for you.