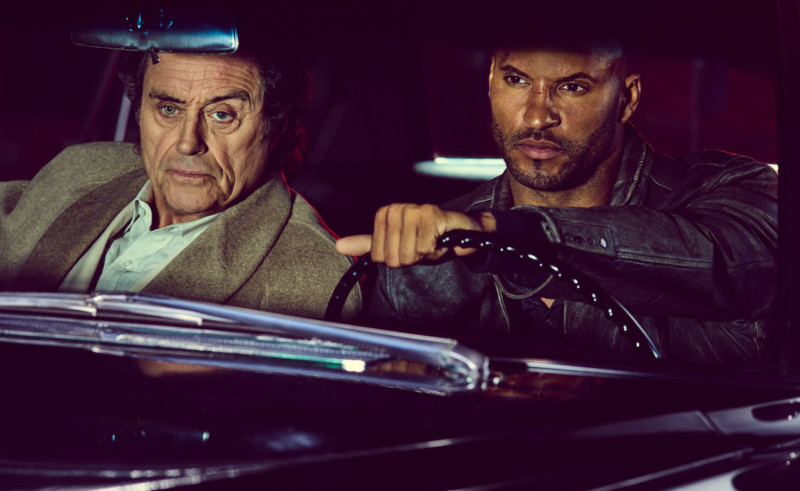 The first four episodes of AMERICAN GODS were screened for review prior to the premiere. This first look is spoiler-free.

In the decades since humans first crawled from the primordial ooze, human beings have sought the comfort of worshiping a higher power. As humanity evolves, so does its beliefs. But where do our traditions go when we abandon them? And for that matter, what happens to those deities we once paid homage to when we no longer need them? In the new series AMERICAN GODS, the gods aren’t dead yet, but their days seem numbered.

Our entry point into this world is Shadow Moon (Ricky Whittle), a recently released convict whose homecoming is upended by the death of his wife. On his pilgrimage back home, Shadow encounters the eccentric Mr. Wednesday (Ian McShane) who offers Shadow a lucrative job as Wednesday’s bodyguard. Shadow reluctantly agrees and finds himself inadvertently drawn into a battle between ancient gods and a new pantheon of powerful deities who draw power from our modern, material obsessions. 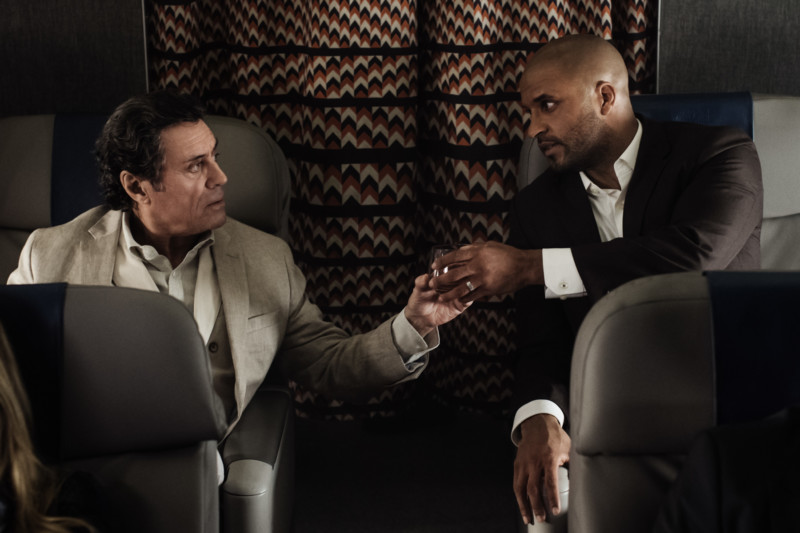 Whittle has to take on the occasionally thankless job of playing straight man to the madness of the deities around him, but he does an excellent job of keeping the story grounded for the audience. Whittle also plays beautifully off of Ian McShane’s Mr. Wednesday, the weary and weathered old god who still has a few charming tricks to pull on us mortals. McShane is effortlessly charming as the man who refuses to admit that his time has passed; McShane is always good, but Mr. Wednesday seems like the role he was born to play.

Based on Neil Gaiman’s 2001 novel of the same name, the TV adaptation of AMERICAN GODS sees series creators Michael Green and Bryan Fuller playing to their strengths. Green’s experience with comic books, genre films, and the alternate history series KINGS gives him a panache for world building and managing an expansive cast of characters. Meanwhile, Fuller’s delight in haunting visuals and strong character work are both on full display here. If you’re coming to AMERICAN GODS as a fan of Fuller’s beloved cult series HANNIBAL or PUSHING DAISES, you’ll see the creator’s love for strangely beautiful imagery on display. These two creators bring the novel to life in a way that remains faithful to Gaiman’s original version, while widening the scope to show us more about the characters who were initially on the peripherals of the novel.

The show’s central narrative hook is that Mr. Wednesday needs to gather an army to face off with an enigmatic enemy. The series takes a similar approach to adaptation as GAME OF THRONES by giving new context and additional scenes to better understand the characters at play. What’s most exciting about these sequences is the history they provide to the gods and their relationship with American culture.

With that expansion of the novel’s narrative, AMERICAN GODS is given the chance to explore our relationship with the myths of the past. In AMERICAN GODS, the forgotten idols represent our cultural heritage being cast into the shadow of efficient modernity. This theme is beautifully summed up in a brief scene with Laura Moon (Emily Browning, also doing some of the best work of her career) in her job as a blackjack dealer. She is shown to be adept at card shuffling, giving each flip of the cards a bit of flair. Her boss hands her an automatic card shuffler, claiming that it will more efficient. The old ways are disregarded as obsolete antiquities and replaced with methods that are more “modern,” but lack the beauty of their predecessors. The modern world is shot as generic and predictable while the gods are depicted as bright, unique, and colorful.

It is this ungodly realization where the series finds its greatest strengths. Gaiman has always been a writer who luxuriates in prose. As such, his worlds come alive through his language or, in the case of his comics like SANDMAN, from the work of his numerous artistic collaborators. But without the limitless budget of comics, adapting a work like AMERICAN GODS into something that maintains the same level of imagination Gaiman puts on the page is a daunting task. Luckily, the team of AMERICAN GODS has put directors behind the camera who can bring Gaiman’s vision to the screen and execute Fuller’s flair for visual splendor.

The first four episodes, under the direction of David Slade (who also worked with Fuller on the early episodes of HANNIBAL), really bring to life Gaiman’s world. The vast plains of America are brought to life in vivid color, as are the strange hallucinations of Shadow, the passionate red lair of the goddess Bilquis (Yetide Badaki), and the world of Technical Boy, a modern god of technology who inhabits a digital universe inside a terrifying VR headset that looks like the spawn of Purgatory and the Apple store. 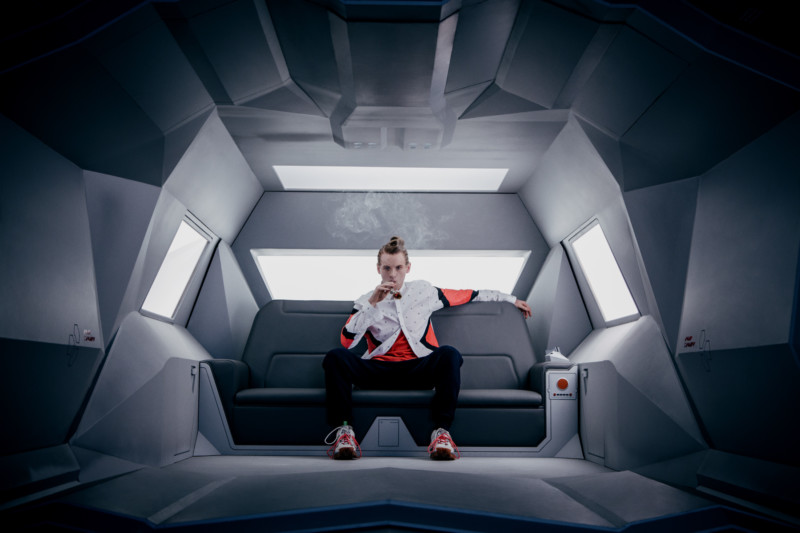 The show manages to strike a fine balance between the real and surreal, showing us a reality where everything seems cranked just a few notches above normal. The production design, in particular, gives us deep characterization: from the run-down, old world apartment of the Russian deities to the colorful plaid suit of Mr. Nancy, the audience understand the characters the minute their little world appears on screen. The visual language of television has replaced Gaiman’s prose, but it still manages to create a fully fleshed-out world for the viewer.

If the show has any flaws in its first few episodes, it’s the pace at which it doles out information to the audience. For those who haven’t read the book, it establishes a long-form mystery for the first season, but for established fans, this might be a bit frustrating. Knowing the fun of the destination can make the journey a bit tedious, but readers of AMERICAN GODS will delight in seeing how well-realized their favorite characters are in the world of the series.

CLICK: How does Neil Gaiman’s SANDMAN: OVERTURE stack up to the original series? Click here for our review

With America facing a crisis of conscience, AMERICAN GODS reflects on traditions of the past colliding with the inevitability of the future. A little bit of magic dies in the world as modernity advances. And it is that magic that Mr. Wednesday is willing to fight and die for. Progress is good, but if that progress dulls down the edges that make human beings unique, then it is no longer progress—it’s gentrification on a massive scale.

The American melting pot has left us with something of a beautiful identity crisis. We are every culture and no culture. This country is every religion and race crammed together, trying to get along. AMERICAN GODS is a beautiful meditation on how the remnants of our past cling to the present. The traditions we leave behind never really vanish, and AMERICAN GODS is a reminder of why they need to be cherished: without them, without something to believe in, without a culture, we aren’t really anything at all.