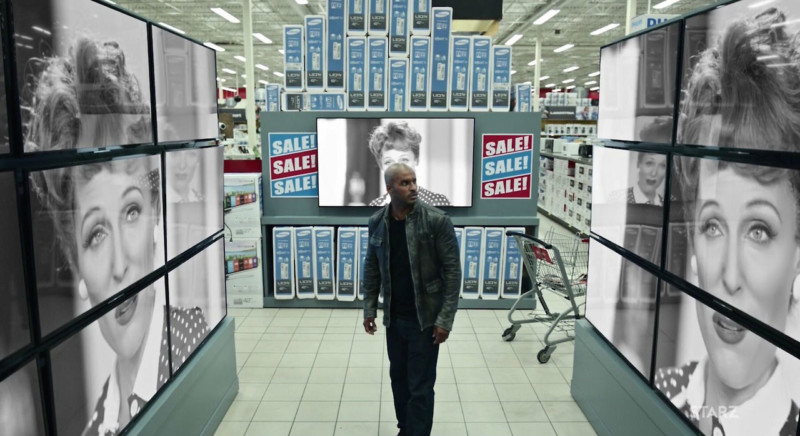 In the first 4 episodes of AMERICAN GODS, the series looked at America’s identity in the 21st century. Can a country made up of so many disparate groups really unite? It’s America’s diversity that fulfills its ultimate belief in liberty. People are free to choose how they live, which in turn leads to an eclectic population. Unifying too closely would cause the death of American liberty. What we discover by the end of the season is that unification is the end goal of AMERICAN GODS’ villainous cadre. They want to unite the gods, but homogenize them in the process.

In the second half of the season, we are reminded that the gods are created by mortals rather than the other way around. The gods need us as much as we need them. In AMERICAN GODS, the relationship between mortal and god is symbiotic. Our need to believe in some greater power throughout history led to our religions, and in turn, our religions gave us hope, morality, and purpose. But what happens when the needs of humanity change? What happens when the gods can’t give us what we desire? As human desires grow and evolve, new gods appear to take the place of the old. It’s that very need for faith as fuel that the new gods exploit for control.

In AMERICAN GODS, those new gods come in the form of a terrible trio. Media, Technical Boy, and Mr. World are deities of 21st century technology and capitalism. They make up the cabal that has pursued Shadow and Mr. Wednesday since the first episode of the series. In episodes 5-8, we finally see the full scope of their plans: the corporatization of belief.

Everything Old is New Again 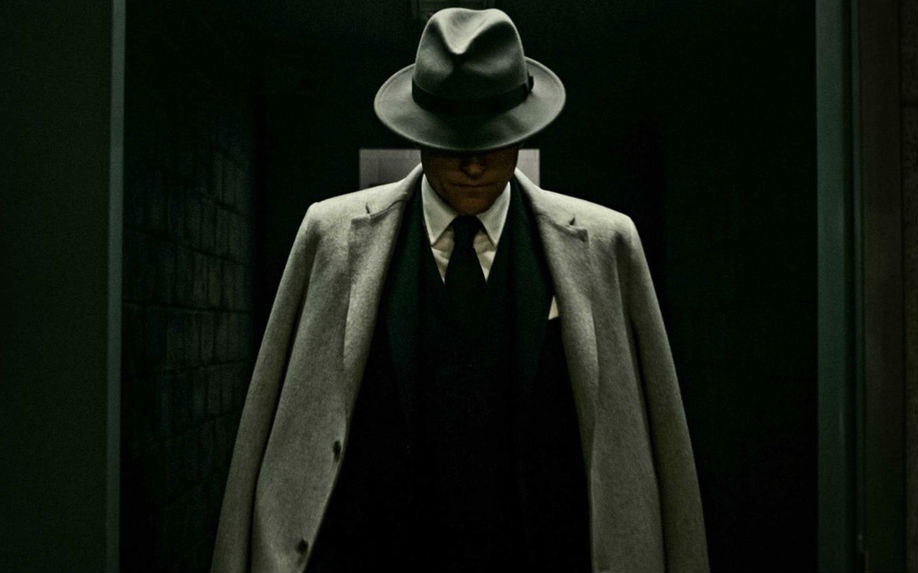 AMERICAN GODS’ vision of 21st century gods is based on humanity’s material distractions. Technical Boy is the god of electronics. He is portrayed as the cliche version of every tech obsessed millennial — sniveling and petty. Media, on the other hand, is far more impermanent and ephemeral. Essentially the god of pop culture, Media takes the form of cultural icons — Lucille Ball, David Bowie, and Marilyn Monroe to name a few — in order to commune with humanity.

These newer gods require a new type of sacrifice. Because modern man lives in a society free of want, we no longer need the power of gods to intervene. So the modern gods take one of the few things we cannot spare. In Media’s introduction to Shadow, the god proclaims “time and attention — it’s better than lamb’s blood.” In a world where everything moves so fast, time has become our most precious resource. These new gods are not divine, but are rather manifestations of the most base modern behaviors of man.

In episode 5 we are introduced the to leader of this new pantheon, Mr. World. Mr. World is the deity representing hard facts and data and seems to know everything about everyone. He is the eye of every security camera and the data algorithm of every search engine. If the New Gods are a corporation, then Mr. World is the focus group personified. The Technical Boy and Media take away time, while Mr. World takes away privacy.

It’s that corporate mindset that gives way to Mr. World’s ultimate goal: reinvent the gods for the modern audience. “Ultimately, everything is all systems, interlaced, a single product manufactured by a single company for a single global market. Spicy, medium, or chunky. They get a choice of course, of course, but they are buying salsa.” Mr. World believes that all religions should merge into one conglomerate. The illusion of choice will be given to the people, but all power will go to the new gods. Corporate America has managed to brand everything else; now it wants to gentrify and corporatize faith.

The idea of gentrification is simple: a group of affluent residents move into a lower-income neighborhood and bring with them major economic change. New, trendy stores pop up alongside luxury housing. Areas that were once abandoned by poverty now become hip centers of bustling economy. It all sounds great, but the dark underside is the way gentrification pushes out the low-income residents of these neighborhoods with soaring costs. The culture and way of life that of these neighborhoods is painted over by a corporate brush.

The AMERICAN GODS series links cultural identity and religious belief closely together. Each episode opens with a “Coming to America” story. Every story recounts one specific culture’s first arrival on American soil and how their gods shaped their journey. The gods become symbolic of the American melting pot. As each culture arrives, they make America their home. What the new gods threaten to do is wipe away that culture and make all of America into a homogenous, commercial singularity.

In the eyes of Mr. World, the old gods are those neighborhoods waiting to be altered into a more “brand-friendly” image. Mr. World speaks the language of consumerism. He talks about “rebranding” Odin as a god of high tech-missile defense systems. Rather than wielding lightning and thunder, he’ll guide ICBMs to their targets. He’ll be worshiped again, but in a much colder, clinical way. What’s most disturbing about Mr. World’s plan is the way that AMERICAN GODS suggests it may have already happened in America. 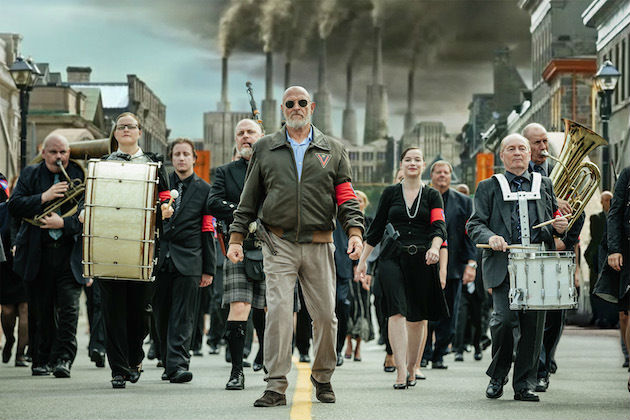 Vulcan provides an example of how these new gods plan to “franchise” the old pantheon for the 21st century. Vulcan, the god of the volcano, becomes the deity of modern explosive might: the gun. He is a truly American god who lords over a small Pennsylvania town where every resident clutches a gun to their chest.

Vulcan has been reinvented by the new gods as a figure of the far right religious conservatives in America who use their faith as an excuse to perpetuate hatred. “I never needed my religion to be moral,” Vulcan tells Wednesday. Neither do many Americans. At the center of Vulcan’s “paradise” is a massive smelting factory that churns out bullets. Every so often a worker will “accidentally” die in the molten fires. A lack of safety regulations is the modern blood sacrifice to the gods of capitalism.

CLICK: What are the major themes in AMERICAN GODS? Check out our analysis!

The new gods have made Vulcan into the ultimate American god: a capitalist whose primary source of economic income is fear and violence. By extension, this infects the religions around it. Vulcan may be a god, but he encourages behaviors seen in right-wing Christian politics. The connection between hypocritical religion and Vulcan’s newfound followers is made explicit in the same episode’s “Coming to America” opening.

In this scene, a group of Mexican immigrants sneak across the border with the aid of a version of Jesus Christ. As is Christ’s destiny, he becomes a martyr for the destitute people he helped. His death this time comes from a hail of bullets fired off from a group of American border watchers. The close ups of their guns reveal Christian religious iconography. One gun man clutches a set of rosary beads while another has quotes from the bible painted on the side of his gun. There is the  modern religion of the new gods: a perversion of ideals to excuse monstrous acts and make profits. These people also do not need their religion to be moral.

All of the “reinvention” done by the new gods revolves around exploiting the power of their “brands” for monetary gain. This is most apparent in our introduction to Easter in the season finale. In order to survive, the former goddess of spring and rebirth has appropriated the modern celebrations of Easter for herself. She celebrates Jesus’ resurrection and fills her home with chocolates and Easter bunnies. She still has power, but she is a shadow of her former self. Easter exists in conjunction with Jesus when she once stood alone.

AMERICAN GODS doesn’t show one definitive version of Jesus. Every version of Jesus for every denomination exists on the show. A Jesus franchise, each with its own brand, a personal Jesus for everyone. Jesus is the original “new god” even though he is not aligned with them. His followers took the former celebration of Easter and reconfigured it for their own needs. His “brand” became so powerful that it forced out the pagan beliefs in the goddess of spring and gentrified their spring solstice with a new celebration of rebirth.

CLICK: How do Thor comics compare to the Thor myths? ComicsVerse investigates.

The “branding” idea seems humorous and satirical, but is it that different from reality? Media references St. Nick making a deal with the new gods as well. Not surprising considering our modern conception of Santa Claus, fat and jolly with a big white beard, comes courtesy of our good friends at Coca-Cola. An advertising company had so much power that it reshaped the way the world imagines a canonical saint. The power of the new gods is all too real.

What ultimately helps Easter rebel against the new gods is Mr. Wednesday giving a sacrifice in her name. In turn, Wednesday reveals his true identity to Shadow. He is Odin, the All-Father of Norse myth. In return, Shadow tells Mr. Wednesday he believes in him. Shadow gives Odin the one thing he has needed all along: faith. 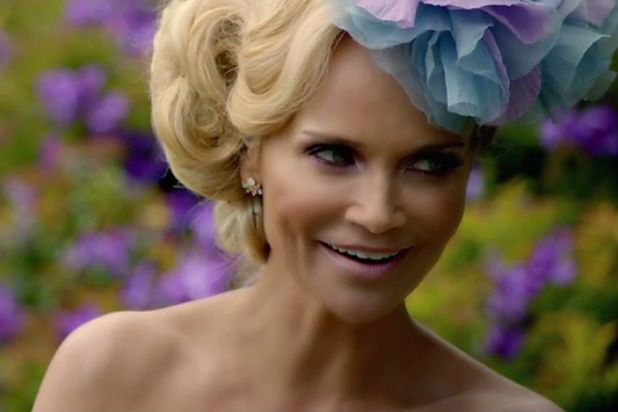 AMERICAN GODS’ first season managed to be a story about religion without being preachy. The show may feature gods in the flesh, but it never attempts to say one religion or set of beliefs is right or wrong. What it does accomplish is an honest story about America’s relationship with its faith. According to Mr. Wednesday, humans gave the gods faith and humans were repaid with the benevolent favors of the gods. The new gods, however, offer no such relationship.

The show warns of what happens when we let ourselves worship the material rather than the immaterial. Faith in something we can’t comprehend, whether it be religion or even our fellow human beings, will reward us far more than paying fealty to corporate system. Belief in a culture rather than something manufactured and labeled will provide true fulfillment. AMERICAN GODS’ ultimate message is simple: be careful what you pray to.