Full disclosure, Neil Gaiman’s AMERICAN GODS is probably my favorite novel of all time. Its mix of classic mythology and Americana nostalgia creates a perfect read for jaded adults like myself who still want to believe there is magic left in the world. The wait for the television adaptation has been killing me, especially knowing that another one of my favorite creators, Bryan Fuller, is involved in the project. After finding out that P. Craig Russell and Scott Hampton were adapting AMERICAN GODS into a comic, my hope was that the comic would be able to tide me over until the television series releases later this year. Luckily, P. Craig Russell and Scott Hampton’s efforts did not disappoint.

For the uninitiated, AMERICAN GODS is a fantasy novel written by Neil Gaiman, originally published in 2001. Shadow Moon, the novel’s protagonist, has been released from prison after the untimely death of his wife. On his way back home, Shadow meets a mysterious stranger named Mr. Wednesday who offers him a job as his bodyguard. Left with little direction, Shadow accepts the position. However, he soon realizes that he’s not just working for a conman but taking part in a war that is brewing between the old gods and the new.

READ: Looking for a Dark Horse comic with ridiculously good-looking art? Find out why you need to be reading ETHER!

The comic adaption closely follows the events of the novel, or at least so far. As an adaptation, it’s very hard to critique the plot since the comic is drawing directly from the source material. Reading AMERICAN GODS #1 genuinely felt like reading an abridged version of the novel. It’s a perfect refresher for those like me who haven’t read the book in quite some time. 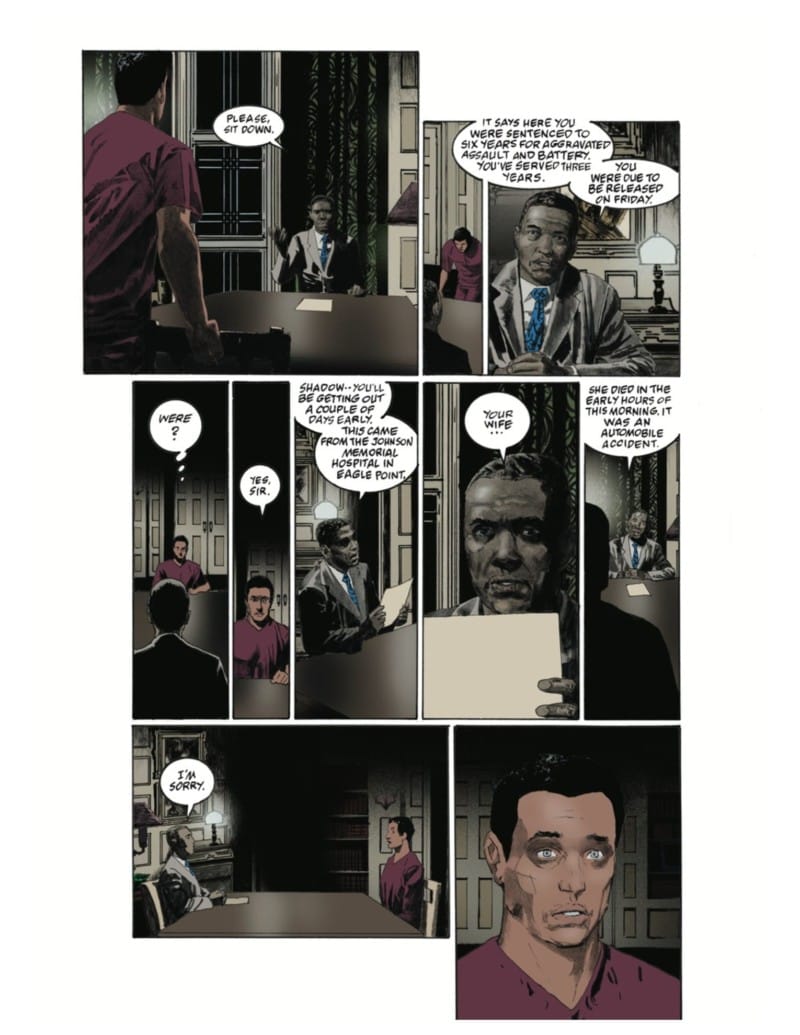 P. Craig Russell, a creative powerhouse in his own right, is no stranger to collaborating with Neil Gaiman. Among other projects, he worked with Gaiman on MURDER MYSTERIES as well as adapting CORALINE and THE GRAVEYARD BOOK into graphic novels. P. Craig Russell knows exactly what he’s doing, and it shows. AMERICAN GODS #1 features a strong third-person narration, just like the novel. Although this may seem like an odd choice for a comic book, it allows Gaiman’s voice to permeate through the entire issue. Gaiman’s storytelling is a major component of what makes AMERICAN GODS so special, so retaining as much of this as possible is a smart creative decision, even if it creates a comic with quite a bit of text.

P. Craig Russell is also responsible for the pacing in AMERICAN GODS #1, which is brilliant. The majority of the issue takes place while Shadow is in jail, with little plot development. Shadow and the reader share a growing sense of uneasiness as the protagonist waits for his release from prison. Shadow senses a storm coming, and the mounting tension leaves the reader bracing themselves for the journey ahead. The deliberate pace of AMERICAN GODS #1 also provides time to establish Shadow as a character before the action truly begins.

The art of Scott Hampton, who is known for his use of traditional media, is perfect for the tone and themes of AMERICAN GODS. The visuals of AMERICAN GODS #1 have a painterly quality to them, and Hampton is clearly referencing mixed media in his work. Some images look painted, while others look like pencillings. He also recycles imagery, reusing a rendering of a bird of prey from Shadow’s wall calendar in different contexts. A comic book based on a novel is undeniably intertextual, but Hampton’s art adds one more dimension to this self-referencing. 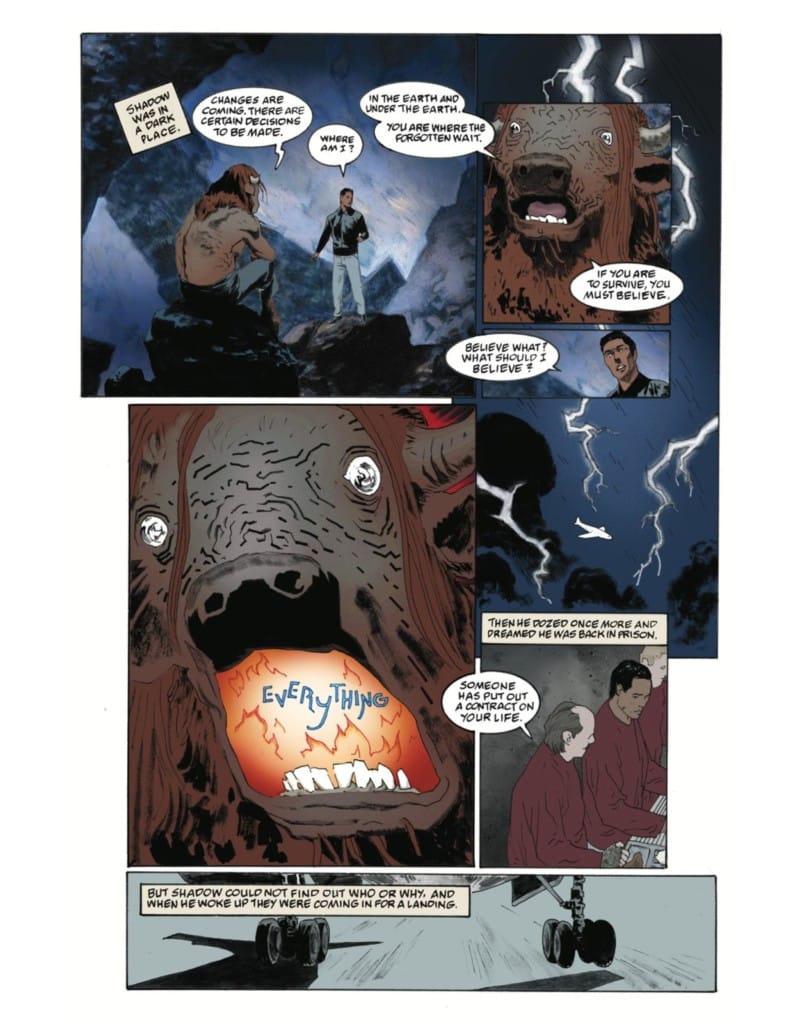 At the end of the issue when Bilquis is introduced, the tone of AMERICAN GODS #1 shifts dramatically. The subdued colors and worn aesthetic of the rest of AMERICAN GODS #1 disappear, with bright colors and psychedelic imagery suddenly filling the panels. This shift is necessary for this soft pornographic scene in which a man gets consumed by Bilquis’ vagina. Hampton’s art conveys sexual bliss instead of fear and foreboding until the very end. As one of the more shocking scenes from the novel, this makes a perfect close to AMERICAN GODS #1. This scene is a jarring confirmation that, yes, some very scary and magnificent things are in store for Shadow Moon.

Adaptation or not, AMERICAN GODS #1 is a stellar first entry. P. Craig Russell paces this issue perfectly, leaving the reader wanting more. Even as someone who has read the novel, I cannot wait for the next issue. Scott Hampton’s visuals get the job done, but I am hoping to see that artist push the envelope a little bit more as the series continues. With Gaiman’s strong narrative voice, Hampton’s imagery can and absolutely should veer towards the abstract. I can’t believe I’m saying this, but the AMERICAN GODS comic should make an adequate substitute for the novel if you don’t have the time to read through it before the TV show comes out.