America Chavez: leader of the Ultimates, interdimensional crime-fighter, and queer teen dream. After lending her talents to multiple super teams, America is finally flying solo, and her debut doesn’t disappoint. Writer Gabby Rivera imbues America with endearing wit and tons of heart, and artists Joe Quinones and Jose Villarrubia adorn the pages with energy and vibrancy. AMERICA #1 is a stellar debut for the series we’ve all been waiting for.

Following a suspiciously easy intergalactic battle alongside her teammates from ULTIMATES, America returns home to the arms of her girlfriend, where they discuss their future together. Unfortunately, their plans don’t coincide, prompting America to punch a star-shaped hole through the fabric of time and space. Her destination: college. In her new surroundings, America meets up with her former Young Avengers teammate, Prodigy. He offers to help her with her first assignment by introducing a time machine he dubs the Wayback — and America doesn’t hesitate in immediately making use of it. It’s almost the start of a Bill and Ted style adventure; however, America’s intentions may be a bit more personal than they seem.

READ: See what America’s bestie, Kate Bishop, has been up to in our review of HAWKEYE #1!

Rivera fills AMERICA #1 with dialogue that feels authentic — it’s full of America’s signature sass, genuinely tender moments between her and her girlfriend, and believable interactions among the collegiate crowd. She writes an America who is strong and driven, frequently narrating her drive to do the best work she can and embrace change, because it is within that change where we create the best version of ourselves — and that is ultimately America’s goal in AMERICA #1. She is powerful and confident, and her narration encourages readers to find the same light within themselves. “Be ready for the change,” America says. “When things feel too easy, when you’ve learned everything one situation can teach, be ready. The change is here. It’s right now. It’s going to wreck everything. And you will be so much better for it.” It’s the kind of message we need to hear from our heroes, and America is the perfect vehicle for it. 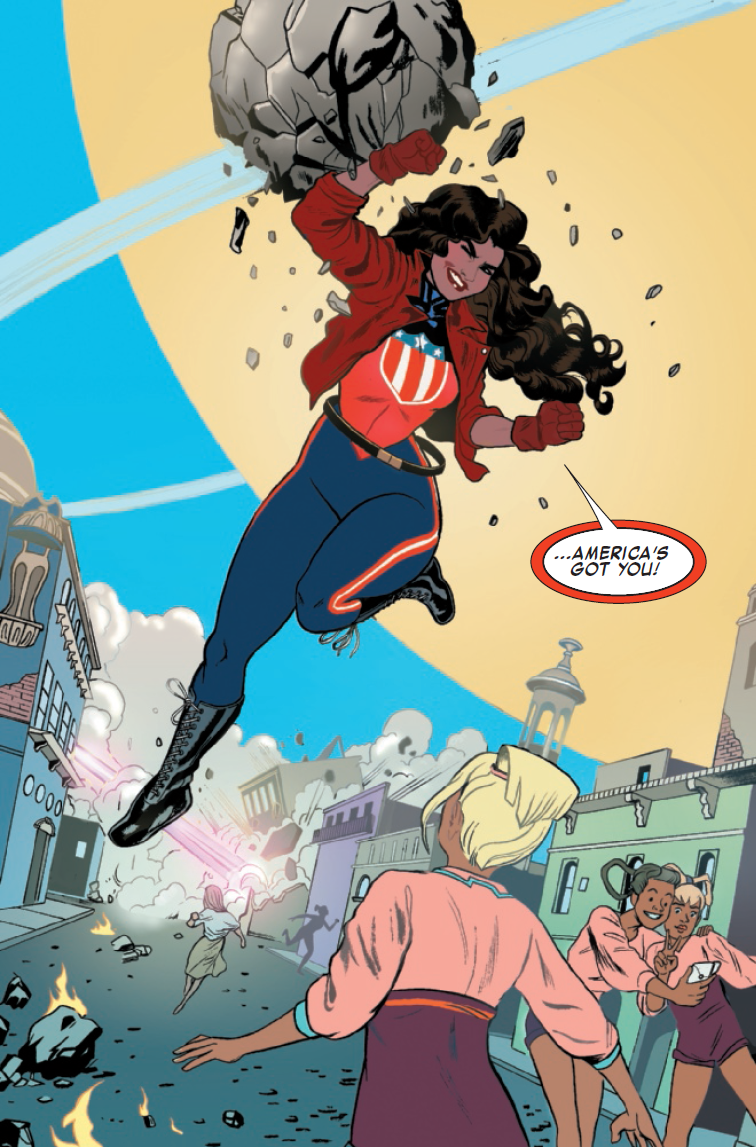 Rivera is unapologetic in the way she tells America’s story, including a slew of diverse and feminist themes in the background, dialogue, and characters, both subtly and explicitly. It all rings true, given America’s history as a Latina woman raised by two mothers. With Rivera holding the reins, AMERICA #1 presents an authentic experience, imbuing this comic with cultural influences. America attends Sotomayor University, named after the first Latina justice of the Supreme Court, where the school’s motto is straight up Selena lyrics. The figures America studies in her classes have Hispanic names, and the intergalactic histories she studies are inspired by the same heritage. It’s a setting that’s rarely seen in comics, and it doesn’t feel forced or shoehorned. Instead, it is a genuine place that fits America flawlessly.

What’s more is this issue’s patriotic undertones, and how powerful it is to have America Chavez represent them. Though she hails from the Utopian Parallel, the themes within America’s name and costume are not lost. Having a Latina superhero with the word “America” emblazoned across the cover of her own comic speaks volumes to the kind of heroes this country’s diversity can offer — and that patriotism translates into a glorious moment in the final few pages of AMERICA #1. 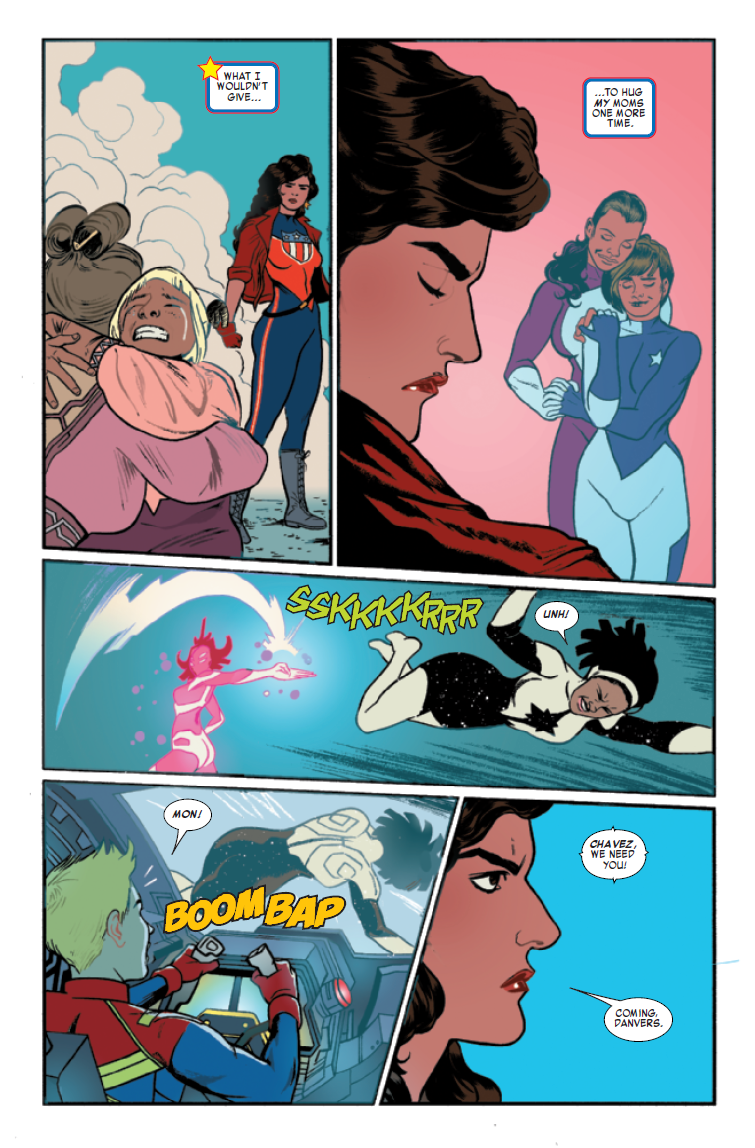 The pacing of this issue flows seamlessly from America’s work with the Ultimates, to her domestic life post-battle, and to her interdimensional collegiate adventures. However, there are a few places where the transitions feel off, and those moments happen when America is too quick to take action: when she dumps her girlfriend, and when she activates the Wayback. While these feel like plot devices that move the story forward too quickly and conveniently, these scenes ultimately lead to the heart of who America is: she’s brash, passionate, and knows what she wants. She isn’t one to embrace emotions, and in both examples, she addresses them in true America fashion. Throughout AMERICA #1 she finds herself among acquaintances old and new, and surely there will be moments for character development where she finds herself needing to warm up to them emotionally.

READ: Here’s why you should read about America in THE ULTIMATES!

Joe Quinones’ sharp and expressive pencils, paired with Jose Villarrubia’s matte and vibrant colors, give AMERICA #1 a retro and energetic vibe. My favorite moments are close-ups of characters’ faces, whether they’re sporting a tough game-face or a serene smile. America herself shines the most in these pages when she makes her entrance in resplendent full-page splashes, with fists raised and a confident grin. Villarrubia’s colors illuminate the patriotic color scheme of America’s outfits against an equally lively backdrop. Panels range from bright red, white, and blues, to the pastel walls of Sotomayor University, to the electric light of America’s universe-smashing stars. It’s a vibrancy deserving of America Chavez.

AMERICA #1 is full of heart from start to finish. This creative team gives us an America Chavez who is multitudinous and recognizable, and her debut issue is a lively and promising start. This is the comic we’ve all been waiting for. AMERICA #1 lives up to all it promised: an unapologetically queer Latina superhero punching a star-shaped hole into a universe where she shines like the star she has always been.