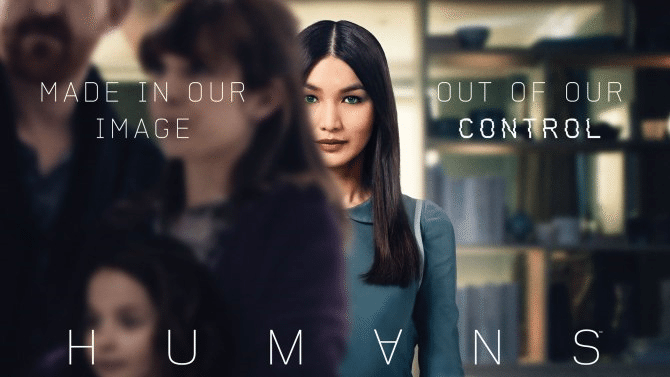 ComicsVerse had the opportunity to sit-in during a press junket for AMC’s HUMANS at New York Comic Con 2016. We were able to conduct interviews with cast members Gemma Chan, Colin Morgan, Tom Goodman-Hill, and Sam Palladio. We also had the pleasure of interviewing the creators and executive producers of the show Sam Vincent and Johnathan Brackley!

READ: Check out our interview with Nick Spencer at NYCC 2016.

The roundtables worked in a sequence. Each reporter, journalist, or blogger sat at a table and were given roughly fifteen minutes to speak with the cast and creators. The press junket broke the actors and the creators into pairs of two. From there the duo would speak to one table and then rotate to the next one, until they met with all the interviewers from the three tables. The audio of the interviews is attached to this article for you to listen. However, if you don’t have time to listen to interviews, I provided some highlights for each one below.

The interview began with Sam Palladio discussing his role in the new season of HUMANS. He stated that as a new character on the show, he plays the everyman that audiences identify with or relate to. At the beginning of the season his character Ed interacts with Gemma Chan’s character Mia. As for Tom Goodman-Hill’s character, Joe Hawkins, he spends the beginning of season 2 trying to repair his broken marriage. Joe believes that by moving away from their home in season 1, he and his family will have a fresh start, a life without synths. When asked how Joe and the Hawkins family will inevitably get involved with the synths again, he stated,

Laura is too involved in the idea of the synth’s welfare to leave them behind.

He goes on to explain how Mattie, his daughter on the show, remains in contact with the some of the synths in season 2. He also states that the children will take a more proactive role fighting for synth rights in this second season. What is interesting to note is that Tom and Sam’s characters don’t actually interact in the second season. In fact, they met each other that day! It’s fascinating that two actors could work on the same show and never actually interact until after the season has ended. Next up are the masterminds behind the show, Sam Vincent and Johnathan Brackley.

The interview opens up with Sam and Johnathan explaining the roles of two new actors in season 2. The first is Dr. Athena Morrow, who works with the second character, Milo Khoury, to obtain resources regarding synths. They had to be vague on the details as to avoid spoilers. What they did reveal was that Dr. Athena Morrow has dark intentions with the resources given to her by Milo. When asked about where they stand in the rise of Artificial Intelligence, Vincent responded with:

We try to show both sides of the story… people who might reject synths and try to live without them. We both, however, feel very optimistic about the future of AIs and what they can offer to humanity.

Both men were adamant about treating the serious issues regarding the characters with the time they deserved. Brackley pointed out that in far too many shows they toss aside legitimate problems after just one episode. He brings up Joe and Laura’s relationship as an example of how their marriage is still trying to recover from the events of season 1 moving forward in season 2.

Then the interview shifted focus to Niska, a synth whom at the end of the first season had the code to give synths consciousness. The creators said that Niska is extremely vital to kicking off the second season with the decisions she makes. Once again, they needed to be vague about what those decisions are and how their outcomes effect the show.

The final topic discussed was the possibility of drawing influence from Star Trek to their representation of Artificial Intelligence on HUMANS. They both agreed that they do show the lighter and brighter side of AIs. Of course they would not rule out incorporating even more of Star Trek’s interpretations of AIs in future seasons of the show. The final interview was with lead actors Gemma Chan and Colin Morgan.

READ: Check out how STAR TREK critiques itself while inspiring humanity.

The interview began with Gemma Chan telling interviewers about her interactions with Sam Palladio’s character Ed early in season 2. She explains how Gemma’s character Mia has a newfound sense of freedom. For the first time in her life she does not have a set purpose. She was built to be Leo’s caretaker and eventually lived with the Hawkins family to be their family synth. While talking to Ed, Mia begins to learn more about herself and what she wants her place in the world to be.

As for Colin Morgan’s character Leo, he explained why his character feels this constant need to fight for a cause. In season 2 Leo and Mia are trying to live this domestic lifestyle, but Leo is not comfortable with that life. Having suffered throughout his life, Leo wants to prevent anyone from suffering the way he did- which gives him a bit of a hero complex. Colin also explained the different themes between season 1 and season 2 when he stated,

When the interview began to shift to a discussion on the effect AI’s will have on mankind. Colin took the opportunity to ask around the table if they were for the future prosperity of synths. Everyone at the table felt that they supported synth lives, except for me. It wasn’t so much that I don’t support them, I just know that the prosperity of synths means the downfall of humans. Here was when Colin commented on his character Leo and how we shouldn’t worry about synths taking over by stating,

He (Leo) is the personification of what the world has to do, which is marry both (synths and humans)… He wants to do that because if he doesn’t, then he’s always going to be alone.

The interview concluded on a hopeful note for the future of mankind and synths, hopefully the show will also leave viewers with this same feeling. After all these interviews, it’s clear that some big events are coming to the show HUMANS that you do not want to miss! The cast and the crew seem super proud of the show they’ve created and I for one am excited to see it unfold in season 2. There is no set release date for the second season on AMC, but it premieres in the UK on October 30th.

“Humans” is set in a parallel present and explores what happens when the lines between humans and machines are blurred. The second season picks up several months after the events of season one, with Niska (Berrington) is still at large and in possession of the consciousness code. Her synth family, Mia (Chan), Leo (Morgan) and Max (Jeremiah), unaware of her location, are each trying to find their place in the world while Joe (Goodman-Hill) and Laura (Parkinson) attempt to mend their marriage. As unconfirmed reports of synths behaving inexplicably surface, the ripple effects of one simple yet seismic decision see the past return dramatically and surprisingly to the door of the Hawkins house.  Joe, Laura and the entire family are faced with a difficult choice that will put the family under an intense spotlight. As an emerging form of intelligent life (the synths) and an established one (humanity) fight for their places in the world, a thrilling multi-stranded narrative evolves which continues to ask: who has the right to determine what it means to be alive?