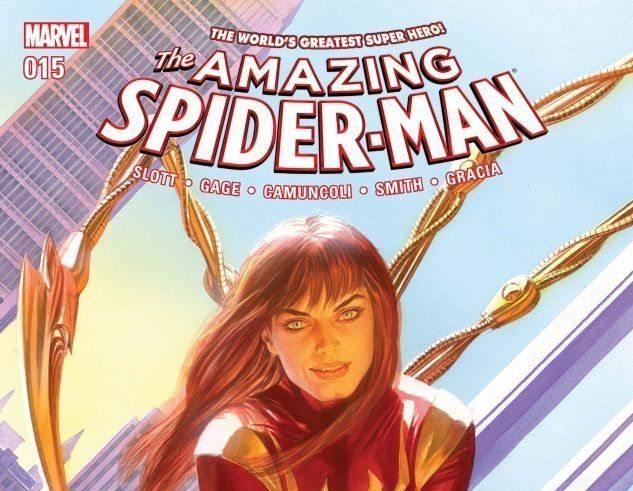 For the most part, THE AMAZING SPIDER-MAN #15 plays out in a manner that most readers expected the story to follow, which is not necessarily a bad thing. Granted, the best types of comic book stories are usually the ones where we the readers are constantly kept on our toes, unable to determine what will happen next. However, predictability does not prevent this climax to the Regent storyline from being a satisfying conclusion issue in its own right. The action and humor remain as sharp as ever while the story manages to tie up loose ends neatly. It may not break any new ground, but THE AMAZING SPIDER-MAN #15 continues to remain a fun and engaging read for Spider-Man fans.

READ: Feeling behind? Check out our review of THE AMAZING SPIDER-MAN #14!

Picking up from where the last issue left off, the villainous Regent has managed to overpower both Spider-Man and Iron Man, planning to keep them in stasis along with the rest of the heroes and villains that he has captured. With none of the Avengers, Ultimates, or Inhumans left to contact for backup, it is up to Mary-Jane Watson to save the day by donning the Iron Spider suit for a one-night-only performance of superheroism. The result is a final throw down between our three last standing heroes and Regent complete with a nice déjà vu throwback to the RENEW YOUR VOWS series (or as I like to call it: ONE MORE DAY: THE APOLOGY LETTER). It’s fun, action-packed and utterly charming to the very end. What more could you want in a Spider-Man comic? 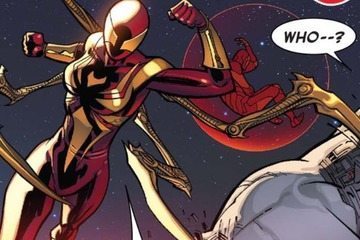 This issue is pretty simple in its core content with the main focus being Spidey and friends working together to stop the bad guy and save the day. You have your typical comic book banter and action sequences and some aspects of mild drama in between, save for an extremely shocking cliffhanger designed to reel in the readers for next month. Apart from that, there is nothing overly complicated or mind-blowing about THE AMAZING SPIDER-MAN #15, and I’m perfectly alright with that. The comic serves as a closing chapter for this storyline, tying together the A and B-plots perfectly. If that is what Dan Slott and the writing team were trying to accomplish, then I’d say that they passed with flying colors.

Probably the most enjoyable part of this comic was watching Mary Jane kick-ass in the Iron Spider suit, surprisingly managing to hold her own against Regent and his multitude of absorbed powers. Originally, I wasn’t entirely sure how the writers would handle this portion of the story, with the only real information I could gather from the cover being that Mary Jane looks awesome in Spider-armor. However, her decision to put on the suit works because it ties back into the themes that have been present all throughout this story arc, that of trust and relationships. Seeing her fight alongside him and Tony not only reminds Peter why he used to love Mary Jane, but it finally forces him to realize that she does not need to be constantly sheltered 24/7 in the name of protection. By the end of the issue, Peter has learned a lesson in not letting his job as a hero overtake his life, with Regent serving as the worst-case example of where such a path could lead. 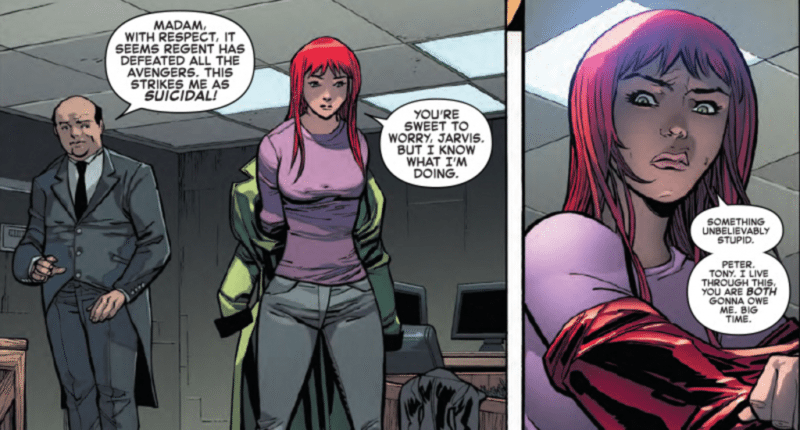 If this issue has a problem, it’s in how the conflict with Regent just kind of ends. He gets defeated and captured, with a few lines to show the parallels between him and our heroes, but that’s about it. While I enjoyed his character over the past issues, Regent doesn’t get much depth here beyond “bad guy,” which feels like something of a waste. Instead, the remaining six pages are dedicated to what Peter learned from this experience, choosing to spend time with his family and enjoy the good moments in life while he still can, lest he lose them all. It’s not a bad lesson in of itself, but I doubt that Slott needed this many pages to get his point across to the readers. A simple page or two of resolution would have sufficed.

The artwork for this book is, pardon the pun, amazing. The combined artistic skills of Giuseppe Camuncoli, Cam Smith, and Marte Gracia still manage to impress in making each character feel detailed in their physical and facial features. The use of dark shadows in the artwork helps add to the detailed immersion, enhancing the depth of character expressions and backgrounds in order to make them feel more realistic than they would have been with a different approach. If I had any real complaint about the artwork in general, it would be that the aftermath of this fight doesn’t give off the appearance of either side suffering extensive physical damage. You could make the argument that since Regent has absorbed the powers of Thor and Wolverine, he would be able to sustain larger amounts of damage and then heal from them almost immediately, thus giving off the appearance of suffering minimal damage. However, I would have liked to see Stark and MJ’s costumes be somewhat dented or torn enough to stress the fact that they had just been through a tense and engaging battle. Apart from that one nitpick, I can’t think of much criticism regarding the issue’s art design; it’s just really, really impressive.

READ: Want more Spider-Man? Check out our review for SPIDER-MAN/DEADPOOL #4!

THE AMAZING SPIDER-MAN #15 is not the best issue of the Regent storyline, but it is still a fun, if not obviously satisfactory, conclusion. Mary Jane getting to be the hero was a real highlight, and the artwork was fantastic as always, but the story ended rather predictably, save for the last two pages. I personally enjoyed it, but I could definitely understand if some people were left wanting more.