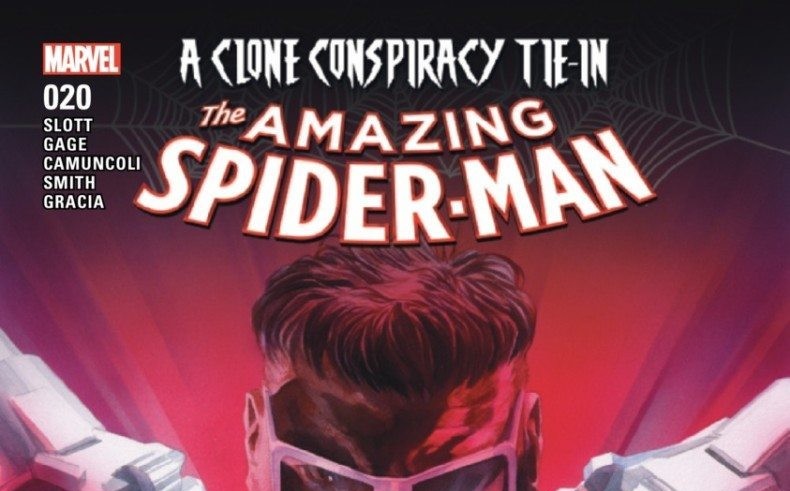 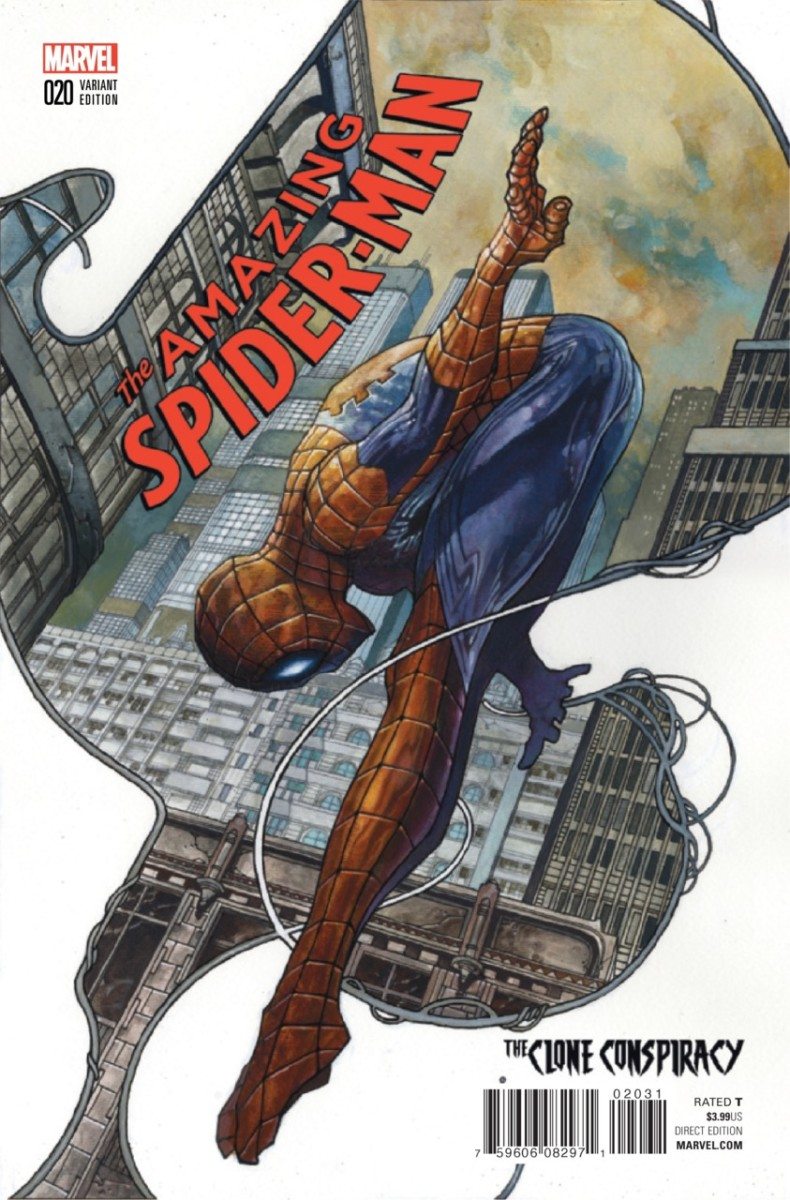 The book opens with our one and only web-slinging hero tangled up in Doc Ock’s tentacles. Spider-Man realizes that Otto has been cloned. Although Otto denies it, we all know cloning is the only explanation.

How’d this happen? The book takes us back and explains how Doc Ock returns and remains threatening. Doc Ock wallows in his own misery, allowing us to get familiar with his new form. This Octobot enters into the cemetery for notorious criminals, where the body of Otto Octavius should be buried. Otto realizes that his body has been stolen, along with others. Following a successful transaction and a few sneaky moves, Doc Ock returns and Spider-Man’s life just got more complicated. 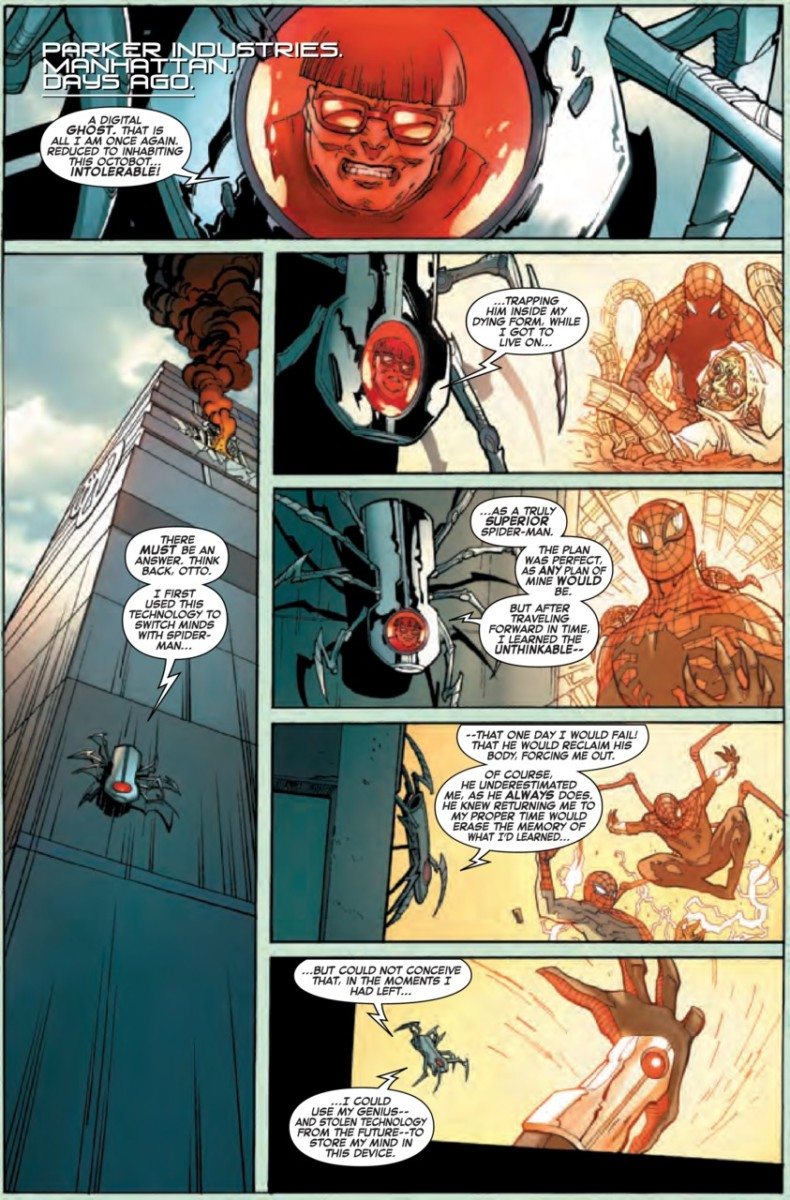 THE AMAZING SPIDER-MAN #20: THE CLONE CONSPIRACY TIE-IN gets readers and Spider-Man lovers excited. We all recognize Doc Ock and remember his many struggles with our hero, but never thought we’d be seeing him again after his demise. While characters returning from beyond the grave is a common comic book trope, it really seemed like Otto was gone for good. I’ll be honest and admit that I didn’t see this one coming.

However, the story of Doc Ock’s return starts off a little far-fetched. When we return to present day, the mind of Doc Ock resides in an Octobot crawling down the side of a building, trying to figure out how he can defeat Spider-Man. The decision to return to his body happens way too quickly to be believable. I kept wondering, “why didn’t he think of this a few days, weeks, or even months ago if it was this simple?” In my opinion, Doc Ock should have taken longer to think about the idea. The book should have at least gave us some flashbacks of other ideas he had that failed.

THE AMAZING SPIDER-MAN #17 REVIEW: Rise of the Clones!

Otto hacked into NEW U’s phone lines, a facility that has the technology to preserve bodies, and made a phone call to another facility that deals with bio-matter. This facility has Otto’s body, so Otto demonstrated a sneaky transaction to retrieve Otto’s body to NEW U’s lab. This transaction is as complicated as it sounds and shouldn’t have gone so smoothly. We all know bumps come with any journey. Doc Ock’s resurrection should’ve had at least one major setback.

With that said, the comic is missing some sort of deeper meaning. I guess you could say that Doc Ock’s mind trapped in a small device kept his ego small and his confidence low. However, I didn’t see anything more complex than that. I think this comic should have given us more flashbacks and shown us how down this Octobot had been. I think it’d even be appropriate to try to approach this from a more human angle, show him experiencing some emotional turmoil rather than returning right to his villainous mindset. I find it hard to believe that the Octobot, after so many years, regains all of his confidence and restores his ego as soon as he’s put back into his body. There has to be SOME mental struggle!

As far as the artwork goes, it presents itself as precise and realistic. For example, on the very first page, Spider-Man is suspended in the air by Doc Ock’s metal tentacles. The artwork shows that the hero keeps afloat, and he appears to be pretty high up due to the illumination glare on Spider-Man’s body suit. These important, simple details make the action more realistic and cinematic. 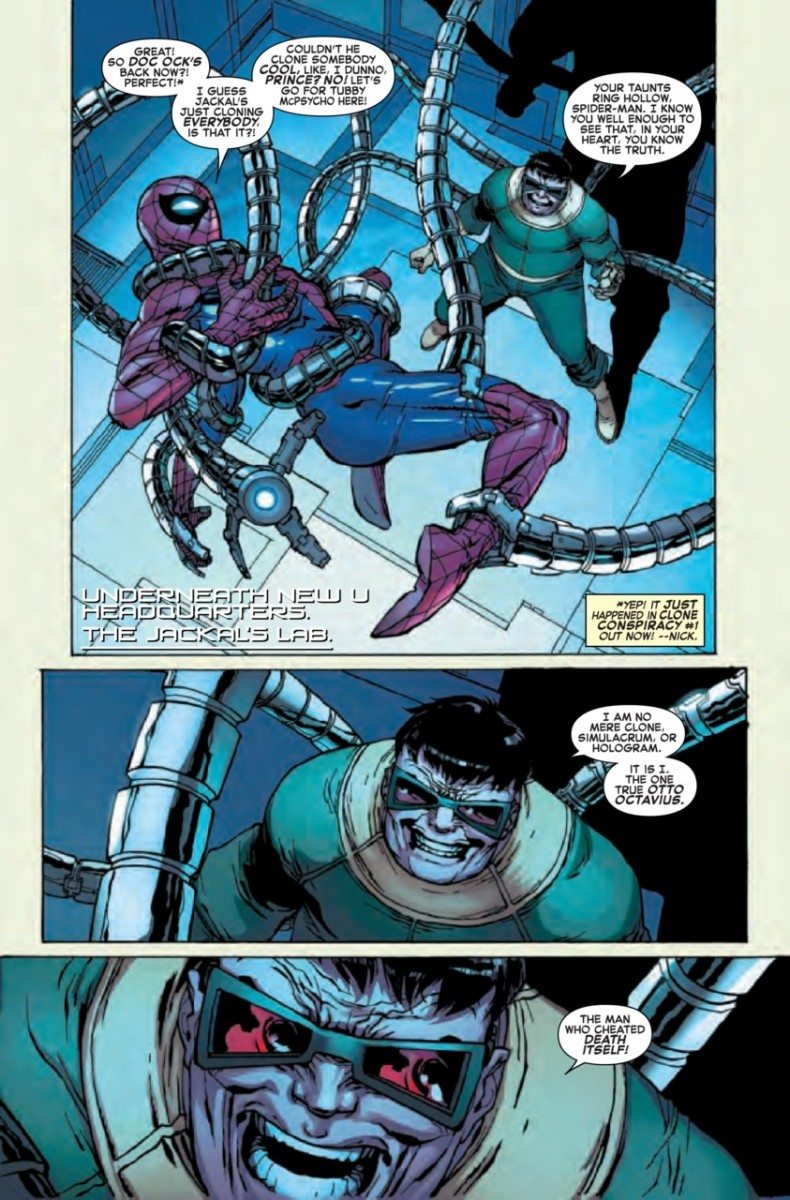 THE AMAZING SPIDER-MAN #20: A CLONE CONSPIRACY TIE-IN gives us another taste of Doc Ock and a little bit of Spider-Man. Although I’m sure many of us would have wanted to see a little more of our hero, I’m sure he’ll play a bigger role in the next issue. Readers and fans haven’t seen Doc Ock in a while and we finally have him back in action; however, the story should have taken some different turns before getting to the fight scene with Spider-Man. Also, in my opinion, there should be a slight change in the villain. It’s great that an old villain is back, but it would be cool to see either a new power, mindset or even change of clothing color. With that said, I was excited to see an old foe return to the fray.