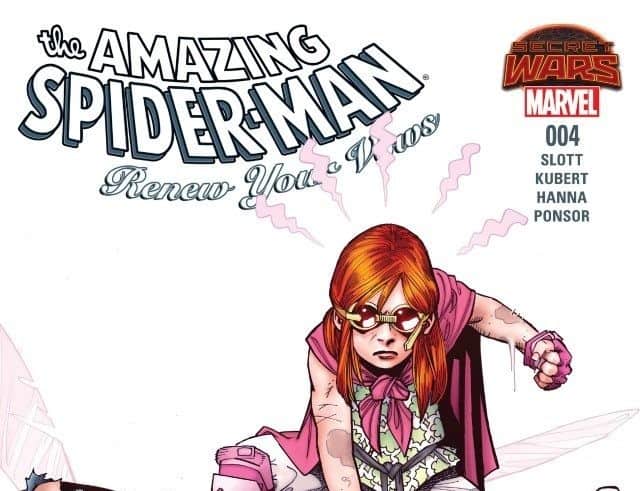 The entire Spider-family is back in AMAZING SPIDER-MAN: RENEW YOUR VOWS, and at this point it seems like the issue is about them instead of just Peter Parker, and in hiding from the Regent. Well, except for Spider-Man who has been captured. Yeah it’s an interesting issue once again, and I am not a 100% convinced it’s either good or bad so let’s figure it out.

The comic begins with little Annie Parker describing her frustration with never being able to use her powers as she is getting captured along with MJ. However, it is revealed that they were actually captured by S.H.I.E.L.D who has been working alongside villains (gasp) to stop the Regent from taking their powers. Meanwhile, Spidey gets captured along with the Sandman who is trying to save him, because of that whole villain team up with S.H.I.E.L.D. The Regent reveals to them that he has been acquiring all of these powers in order to fight Doom, and Peter has the proper response.

LISTEN: BATGIRL IS BACK IN PODCAST FORM! CHECK IT OUT!

Overall, there are some really cool and fun things going on in this issue. I really enjoyed the intro given by Annie in conjunction with her behavior throughout the rest of the issue. I do feel a little odd that the issue seems to believe that it is okay for an 11 year old girl to fight super villains. Frankly, I just don’t agree so even though I think little Annie is badass, she doesn’t have any combat training and she is a child so ultimately I feel very odd about the entire situation. However, I do like the animosity that exists between S.H.I.E.L.D. and MJ over Peter’s decision to not help the Avengers in the first issue of this series. That was such a strong opening, and all of my favorite moments in this run have stemmed from the repercussions of that decision so once again I was intrigued. Hawkeye’s disdain in particular for the Parker family and their decisions in the light of recent events is very compelling to me. 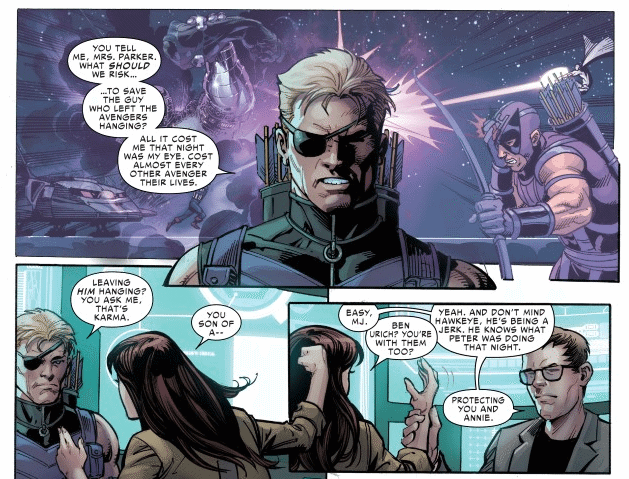 READ: THE BEAUTY #1 IS OUT, BUT SOMETIMES A GREAT PREMISE DOESN’T ALWAYS MAKE A GREAT COMIC! FIND OUT WHY IN OUR REVIEW!

I have admitted in my previous reviews to having a difficult relationship with Adam Kubert’s art, but I have to say that this time around I was completely on board with every panel. In particular when it came to panel composition, there were some extremely clever and enjoyable choices made with a few two page spreads that I absolutely loved. However, I have to admit that while I don’t love Annie’s superhero costume I do appreciate the statement that it makes. Honestly, I think if this was a comic book about Annie Parker that was geared towards a younger demographic then it would be amazing, seriously I think little girls need that comic in their lives, but considering the way that the issue had been going up until now it just wasn’t what I expected or wanted.

Overall, this issue left me kind of lukewarm. It wasn’t bad at all, but I also wasn’t terribly moved by it. I kind of had the same level of reaction that Peter had when the Regent revealed his convoluted, evil and super intense plan. A statement of “Got it” with a straight face that turns into a little bit of a emotive face.  So while it’s not the most exciting thing you’ve ever seen, if you like watching Marvel heroes show up and enjoy Peter Parker then you probably won’t leave disappointed. Probably.