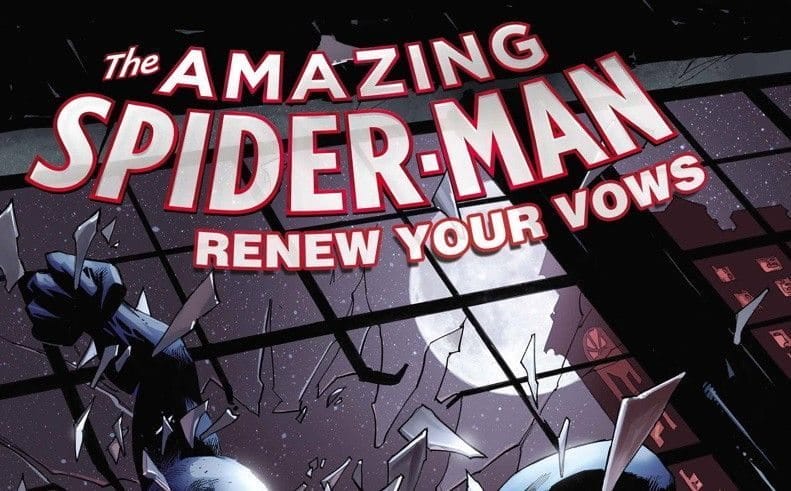 AMAZING SPIDER-MAN: RENEW YOUR VOWS #3 is here (gosh that’s a long title) and Spider-Man is back…. kind of. Will Peter revert back to being an amazing hero or stay in the background to protect his super daughter?

Would you believe that he does a little bit of both? The comic begins with our new super villain, the Regent, being scary and saying that without absorbing the power of Spider-Man every other super power he maintains is useless. Meanwhile Spider-Man is attempting to buy some inhibitor chips from the Tinkerer, but Doc Oc shows up. Spider-Man deals with him in pretty intense fashion and escapes. Back at the Spider-home, Mary Jane is tucking Annie into bed and tells her of what Spider-Man used to do and why he quit. Peter returns home, and they receive an emergency broadcast, which states that all parents must report to school with their children tomorrow. This check occurs because Mysterio realized that Spider-Man must have a child at the school he was protecting. The Parker family arrives at school the next morning, and surprisingly, a major battle ensues. 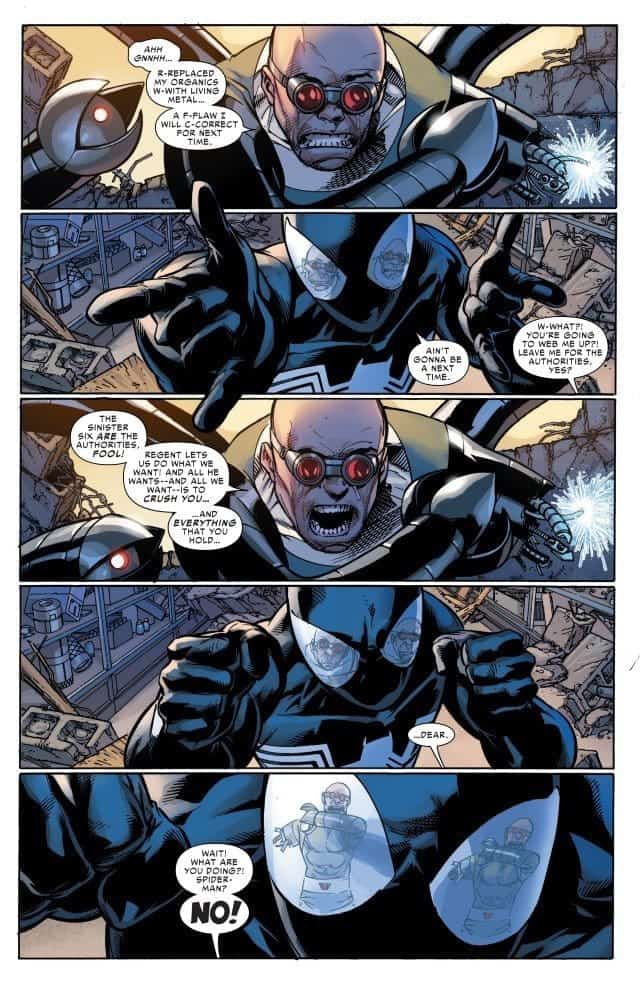 READ: How weird is it? Pretty weird! Check out our review of WEIRDWORLD #2!

There is a lot going on here, but in spite of all of the plot, there is a nice moment between MJ and Annie. Mom tells Annie that Spider-Man always wins while she remembers all of the deaths that he has endured. This thread ties to the larger theme of the whole issue: family. It is becoming even more clear what the introduction of Mary Jane and a child would do to the world of Spider-Man. Peter would obviously put them first because he is a responsible man who cares about the ones he loves. I’m not convinced, however, that this is the most compelling narrative direction because it requires us as readers to watch Peter struggle with deciding to become Spider-Man again, which is fine, but there isn’t really a very clear action that leads him to officially become Spider-Man, or at least it isn’t presented in a way that makes me feel.

CLICK: Batgirl is back and she’s chilling with her newly super father! Find out how it works in our review!

This lack of a definitive moment is part of what gives me such mixed feelings about where this comic has gone. The first issue was a complete surprise and totally got me hooked, but the issues that followed have only had moments that never quite reached that same high bar. In the second issue when Peter just took pictures while the crowd was yelling for some one to do something, I felt something. When Mary Jane remembered Peter enduring Gwen Stacey’s death, I felt something. But when the family all came together to save the day, I didn’t feel quite as much. 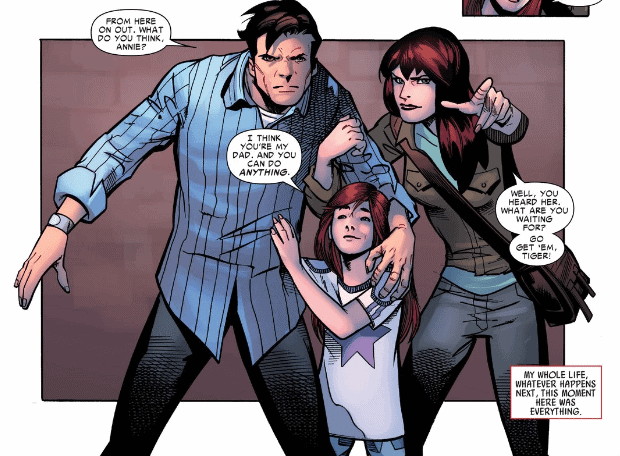 Maybe I’m dead inside, but I thought this moment would have been even greater if I had a stronger investment in their family, and for some reason I just didn’t have that.  Also it seems like Annie is looking older and more mature in this comic and that just freaks me out, but maybe I just didn’t notice that before.

The second panel is MJ and in the third panel at the bottom is Annie. Draw your own conclusions, but when I was Annie’s age I was awkward and had cute little baby fat, not flawless skin and perfect hair.

This is a good segue into the art of this issue. I have to admit that this is not quite my drawing style, I am more into the art of Batgirl and Bitch Planet, but the Spider-Man costume is beautiful in action. That is the definitely the strongest art in the entire issue. Personally, I haven’t been the biggest fan of Mary Jane and Annie’s character designs because I feel like they are too generic and too detailed. They don’t quite fall into the uncanny valley, but there is so much detail that occasionally I’m taken out of the narrative by it.

Overall, AMAZING SPIDER-MAN: RENEW YOUR VOWS #3 doesn’t quite live up to the hype that the first issue promised, but there are still poignant moments that any Spider-Man fan will enjoy. It also feels like time for a new twist to arrive, and if it’s as good as the ending to the first issue, then it will definitely be worth the wait.

CLICK: We haven’t forgotten about you Marvel fans! Check out our look at the X-Men in X-MEN: APOCALYPSE!