One of the biggest issues that can harm a work of literature, especially a comic book, is prolonged exposition. THE AMAZING SPIDER-MAN #22 sort of suffers from that problem, not enough to fully ruin the issue, but still relying too much on giving a prolonged explanation of the motives behind CLONE CONSPIRACY. Thankfully, the story itself is rather intriguing and delivers a good amount of pathos and depth to make us sympathize with the villain’s motives. This increases the stakes for Peter Parker, who has now become aware of the fact that his involvement in New U has had far-reaching consequences in other worlds. It might be a dialogue heavy chapter, but THE AMAZING SPIDER-MAN #22 does a good job at adding context to the surprise twist at the end of THE CLONE CONSPIRACY #3 and building upon previous Spider-Man storylines. 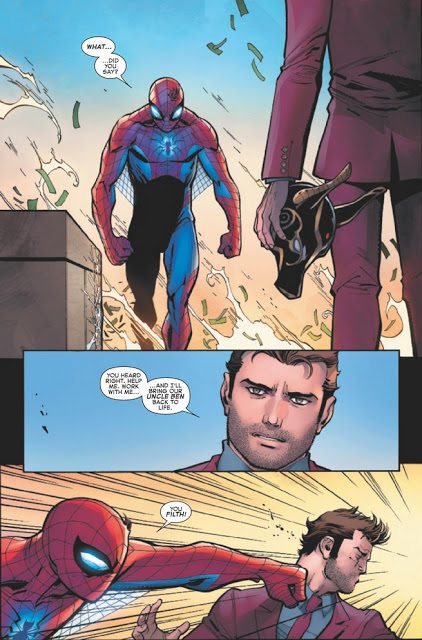 Picking up from where the main storyline left off, Spider-Man is shocked to have discovered that the mastermind of New U was not Miles Warren, but rather Peter’s long-thought-dead clone Ben Reilly. Having shown a desire throughout the series to have Spider-Man work with him willingly, Reilly hopes to rewrite the mistakes of their past and bring back the ones he and Peter were unable to save. Unfortunately, Peter doesn’t take too kindly to this, especially the suggestion that they try to bring back Uncle Ben of all people. In hopes of getting Spider-Man onto his side, Reilly recaps the events that led up to the former Scarlet Spider becoming the new Jackal. Upon hearing what Reilly has to say and what he’s gone through in that time, you begin to understand how easily Peter could get swayed to New U’s cause.

READ: Take a look at RENEW YOUR VOWS: a Spider-Man storyline where ONE MORE DAY never happened!

Since Ben Reilly is a well-known and established part of the Spider-mythos, the idea of making him the villain of this storyline surprisingly works because it ties into his personal motivation. Reilly’s character arc has always been that of finding one’s own identity, having struggled with the knowledge that he was himself a clone of Peter Parker. Yet because he’s a clone, Reilly also shares aspects of Peter’s personality, among them the desire to use his power to help those around him. In a sense, this New U plan, twisted as it might be, is seen by Reilly’s as a means of helping those he’s let down in the past. At the same time, the issue makes it clear that Reilly’s way of thinking is completely twisted, having been shaped by the pain he’s experienced over the years from constantly being brought back to life and re-killed. It’s a cause that he truly believes in, one whose logic is backed up by the experiences that Reilly himself has gone through in the past.

READ: Take a look at how Spidey and Deadpool bond over the holidays in SPIDER-MAN/Deadpool #12!

While the dialogue is strong enough to distract readers from the fact that it’s mostly exposition, THE AMAZING SPIDER-MAN #22’s artwork is a tad less fortunate. It’s not awful, but the imagery that Giuseppe Camuncoli delivers here feels less meticulous than his previous work in the series. The textures are a bit flatter and don’t exude as much detail, but that could be due to the fact that this issue places its primary focus on dialogue rather than action. There are moments of brilliance, though, as seen in panels where Camuncoli resorts to a more classic style of artwork to encapsulate iconic scenes from Peter and Reilly’s past storylines. Overall what we get here is merely passable: it’s enough to get the job done but you can’t help but wish they put in a bit more effort. 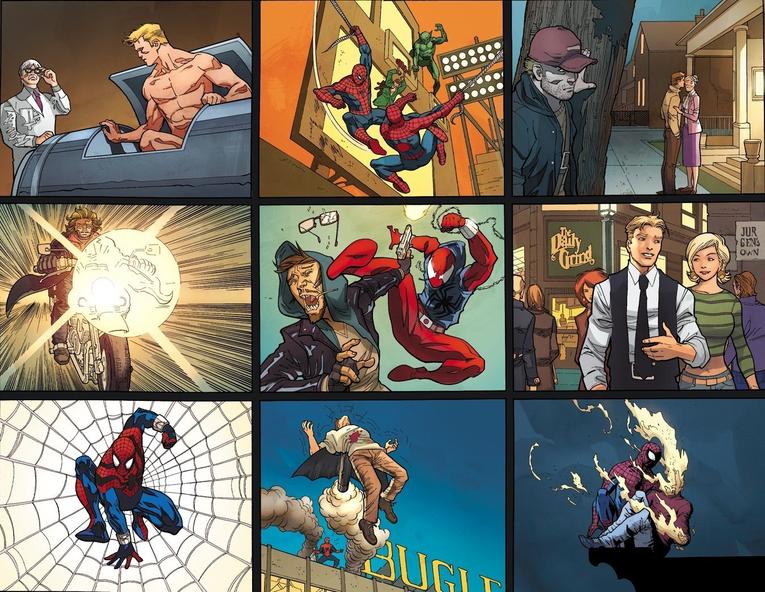 This is definitely a turning point in CLONE CONSPIRACY, adding some much-needed depth to our villain’s master plan and tension to our hero’s upcoming choices. Throughout the teases for this storyline, we’ve seen the Jackal claim that he’s working in mankind’s best interests and wants to help; however, with THE AMAZING SPIDER-MAN #22, that sense of purpose becomes even stronger as we realize that, in Ben Reilly’s mind, he’s pursuing a righteous and important cause that will allow him to atone for past mistakes. Despite the knowledge that this cause has resulted in global disasters on so many other Earth’s, it’s still easy for us, and Spider-Man, to sympathize with his cause. As for how far things will go before it’s too late, only time will tell.