With CLONE CONSPIRACY around the corner, it’s become common to see numerous SPIDER-MAN characters once declared dead come back to life as clones. But now, an old face has resurfaced under different conditions. Otto Octavius is back, having waited in the shadows for the chance to return, his mind hidden away within the mechanical body of the Living Brain. From this, THE AMAZING SPIDER-MAN #18 gives us a look at the old, rather arrogant and self-mighty Doc Ock containing no memory of his noble decision to return Peter Parker’s body back to its rightful owner. It’s a plotline developed in the mind of Dan Slott since his work on THE SUPERIOR SPIDER-MAN and now come to fruition, a funny and well-written payoff issue that returns one of Spider-Man’s greatest enemies to the Marvel Universe once again. 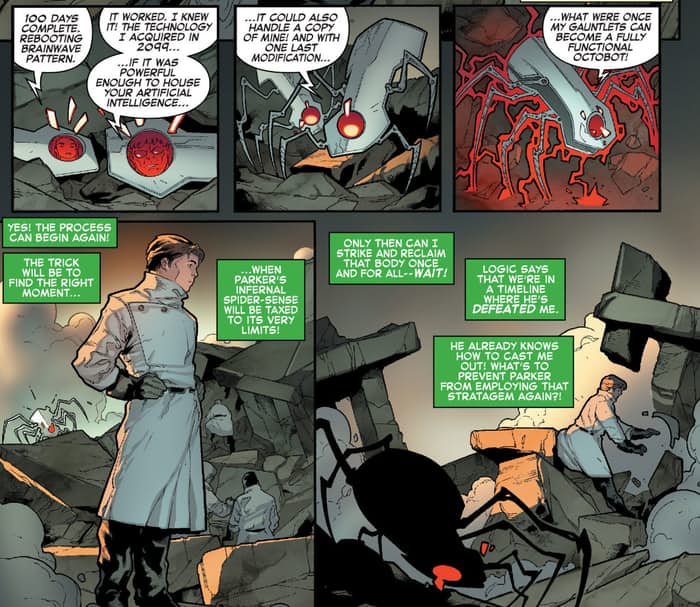 Starting from the end of SPIDER-VERSE, the younger SpOck (Spider-Ock) managed to store his brain patterns within his gauntlets, having realized that Peter Parker would best him in the near future. SpOck would retain no memories of these events, but his back-up mind would, albeit without any knowledge of the choices he would make during GOBLIN-NATION. Now, hiding himself directly under Peter’s nose, Otto has been slowly building up his revenge against his former foe. He hopes to re-hijack Parker’s body and prove once and for all that he is the better Spider-Man, as well as regain the love of his dear Anna-Marie Marconi.

READ: CLONE CONSPIRACY gets even deeper in THE AMAZING SPIDERMAN #17

The best part of this issue is how Slott delves into the mind of Otto Octavius, albeit one that bears closer resemblance to the beginning of SUPERIOR SPIDER-MAN. He’s brash and arrogant, boasting about his superior intellect and struggling to fathom just how Spider-Man bested him. Never does it occur to Otto that the reason Peter regained his body was not some elaborate mental takeover, but rather Otto himself choosing to do the right thing and sacrifice his memories in the name of the greater good. Therefore, it kills Otto to see the world he built in Peter’s body fall apart, unable to accept that he would ever choose such a noble (aka weak) path or that his love life was built on a lie. To the unsuspecting public, it looks like Brain is asking questions as he serves “tasty beverages,” but inside it’s Otto trying to grasp the logistics of reality.

THE AMAZING SPIDER-MAN #18 also does a good job at balancing Otto’s character drama with a nice balance of humor, as well as a bit of action near the end. The sight of Doc Ock ranting about his own incompetence in a robotic body is pretty damn hilarious, but also somewhat tragic, as despite his jerkish nature you can’t help but feel a tiny bit bad for Octavius’ conundrum. This culminates in Otto engaging Spider-Man once again as he learns the truth, once again unable to accept the outcome of his own changed nature as the Superior Spider-Man. Over all, it’s a perfect blend of serious and silly, tying Otto’s entrance back into Spider-Man’s life and CLONE CONSPIRACY as well. 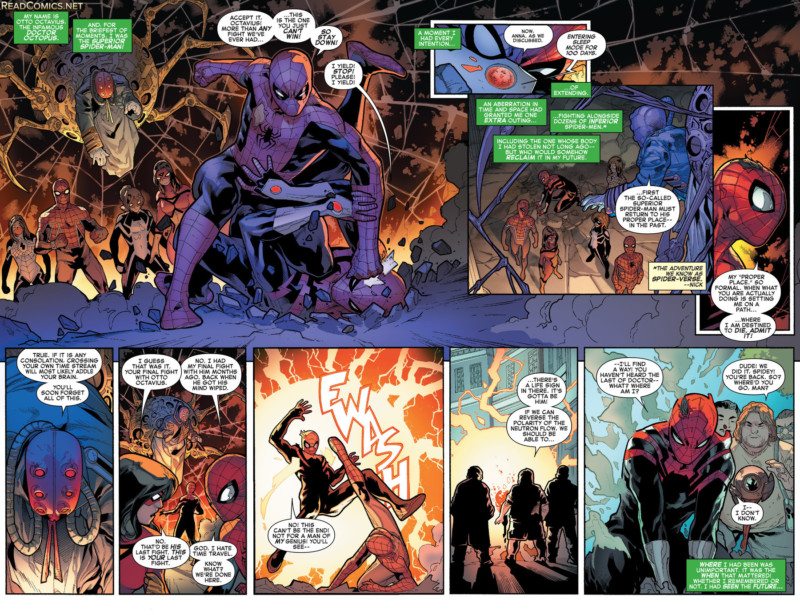 Even though R.B. Silvia doesn’t have the same artistic quality that Giuseppe Camuncoli has shown in past AMAZING SPIDER-MAN issues, I still think that his illustrations here are pretty good. The background designs and body proportions are well drawn and lively, but it’s with the facial features that he struggles. You can still read the character’s expressions, but there’s a noticeable lack of detail to them, especially when the faces are drawn up close. That being said, Silvia does know how to work the colors to his advantage and balance the light and dark imagery with one another, even if it does remain rather cartoony. Then again, considering this issue centers around a villain’s mind stuck in a mechanical butler, I’d say cartoony works here.

READ: What was Spidey doing during the events of CIVIL WAR II? Find out here!

A bit of exposition in the front and a couple of flat facial images here and there doesn’t stop THE AMAZING SPIDER-MAN #18 from being everything one wants in a Spider-Man comic. It’s got action, humor and drama wrapped in a neat package while setting up plot details that tie into an ever-expanding series of story arcs—essentially your typical Dan Slott fare. There’s no telling how Otto Octavius will tie into New U and the latest major storyline, but it should be fun to find out.