Spoiler Warning: This review analyzes and speculates the events of ALL-STAR BATMAN #9.

Writer Scott Snyder concludes his “Ends of the Earth” storyline in ALL-STAR BATMAN #9. The finale misdirects readers and its villain with Batman’s wit. Snyder’s writing is accompanied by the return of Jock, as his art evokes an intense atmosphere. It all leads up to a solid conclusion. Batman finally meets the mastermind behind the global threats that transpired in the previous three issues.

READ: Need a recap? Take a look at our review of ALL-STAR BATMAN #8 to get a peek inside the mind of Bruce Wayne!

And the Mystery Villain is…

Batman’s latest thrill finds him near the Washington Monument in D.C. We see Batman being hunted by the military force known as the Blackhawks in an action-packed chase. It’s later revealed that the man behind Batman’s latest woes is the Demon’s Head himself, Ra’s al Ghul. Ra’s plans to kill millions so he can renew the world to his liking. Although it sounds cliché, the confrontation between the two leads to some interesting twist and turns. 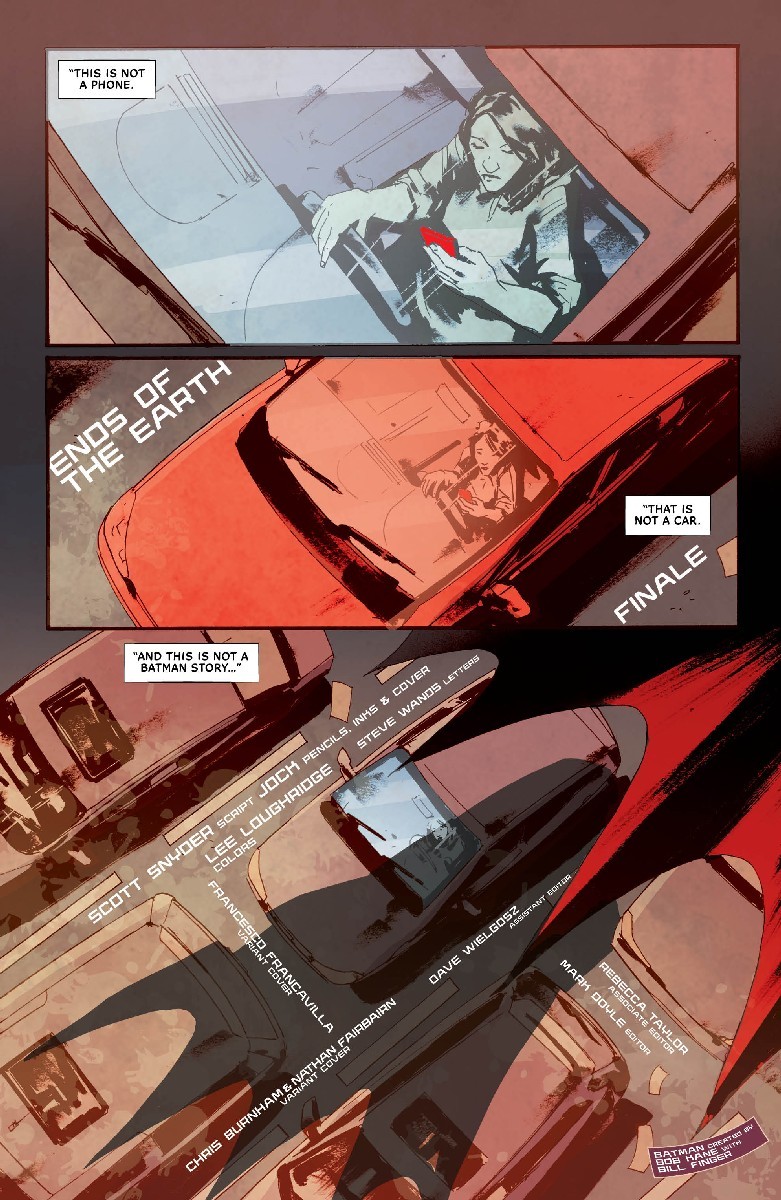 “This is not a phone. That is not a car. And this is not a Batman story… No matter how it looks”. These opening first words of ALL-STAR BATMAN #9 takes a superhero tale and changes it into a MISSION IMPOSSIBLE-like spy thriller. Batman must race against time as Ra’s al Ghul appears to have the upper hand, but the Bat proves to be just a few steps ahead of his foe.

For instance, the Caped Crusader utilizes the Blackhawks’ hologram technology and Mad Hatter’s toxin to prevent Ra’s from completing his master plan. These and other small references, while feeling a bit forced, help connect Snyder’s “Ends of the Earth” arc as one cohesive story. While the previous three issues worked as their own standalone tales, in here the references felt necessary. The use of Batman’s wit in the finale echoes his previous encounters and journeys, from the Arctic to the Swamps, showcasing the character’s ability to learn and prepare for danger.

Alongside the banter, the finale also provides Snyder’s usual smart dialogue. This time, touching on fiction and demonology. Ra’s al Ghul even labels Batman as the “greatest demon of all”. He explains how Batman stands for something that’s fictional, a false hope. Ra’s claims to only chase after the truth, but the truth leads to nowhere. Instead, people gets lost to the cacophony of war and confusion. Ra’s fights fiction with fiction by creating uncertainty among the masses. He fights to take back his title of the “demon”, even if it means killing millions.

Although there’s depth to Ra’s al Ghul’s ideology and portrayal in ALL-STAR BATMAN #9, the character falls short compared to the other rogues in previous issues of the “Ends of the Earth” arc. The grim, loneliness felt in Mr. Freeze’s story, or how Ivy was portrayed as a misunderstood botanist, and even the head-scratching trip with the Mad Hatter made Batman feel inferior to his enemies, where in this issue the villain was easily outmatched. 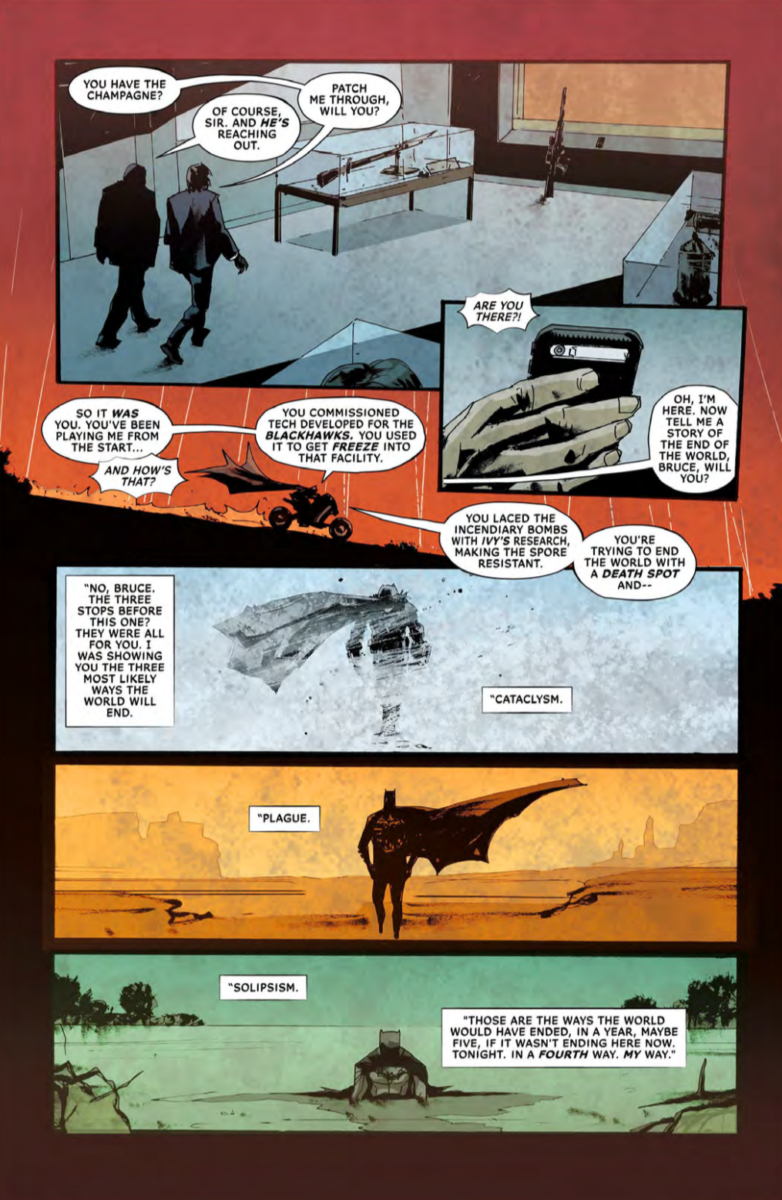 While Jock brought the chills for Mr. Freeze’s story in a previous issue, in ALL-STAR BATMAN #9, the artist brings his iconic use of ink and pencils in a much more action-packed story. Where the inking highlights deep shadows and explosions, the pencil work traces the emotions expressed through the characters’ faces. The main confrontation between Bruce and Ra’s incorporates action, explosion, and even some splashes of blood. Throw some Man-Bats in there and you have scenes that feel like a nightmare or, in Ra’s al Ghul’s case, a vision. The colors of Lee Loughridge are also noteworthy as the pages encapsulate the beginning of an apocalypse. As the sun sets, the panels are struck with an alarming red and purple aura that slowly fades away to a blue and purple night sky, full of hope.

WATCH: Get the latest Batman news with episode 15 of our Weekly Comic News Show!

Duke’s also back with the finale of his arc, “The Cursed Wheel”. When surrounded by faces from his troubled past, Duke accidentally uncovers new abilities. The shocking end leaves many questions but nonetheless promises an interesting story to come for the young hero. Artist Francesco Francavilla crafts an uneasy feeling with his choice of color and facial expressions, as Snyder continues to build the character of Duke and further distinguish him from the rest of the Batman Family.

All in all, ALL-STAR BATMAN #9 is a worthy finale to Snyder’s “Ends of the Earth” storyline. While Ra’s al Ghul might not have been as captivating as the previous rouges of the arc, Batman’s wit, alongside Jock’s trademark art style, makes this issue an entertaining read. The overall “Ends of the Earth” arc should be celebrated for its deeper look at the Bat-villains, taking risks with the art style and breaking traditional storytelling, after all: “this is not a Batman story… No matter how it looks”, it’s much more than that.