ALL-STAR BATMAN #5 concludes the “My Own Worst Enemy” arc about the complex relationship between Batman and Harvey. Once again, we are treated to a more hopeful Dark Knight, providing deeper dialogues between him and his foe. The art team also delivers some fantastic and enjoyable action scenes. However, the previous issues have formed so many nuisances for Batsy that certain subplots are easily dismissed while a certain sidekick fails to make a bigger impact on the conclusion.

READ: ALL-STAR BATMAN #4 showcases all kinds of wacky Bat gadgets. Be kind and rewind on the epic road trip!

ALL-STAR BATMAN #5 picks up where the previous issue left off, with an angry mob waiting to get their hands on Batman. Batsy, alongside Duke and Two-Face, is held captive in a boat by KG Beast and company. The scene quickly escalates as bullets are exchanged from both the mob and KG Beast, leading Batman and the gang to make an epic escape via waterfall. They finally reach their destination and what started as a journey to find a cure for Harvey, ended up being more of a “resolution.” 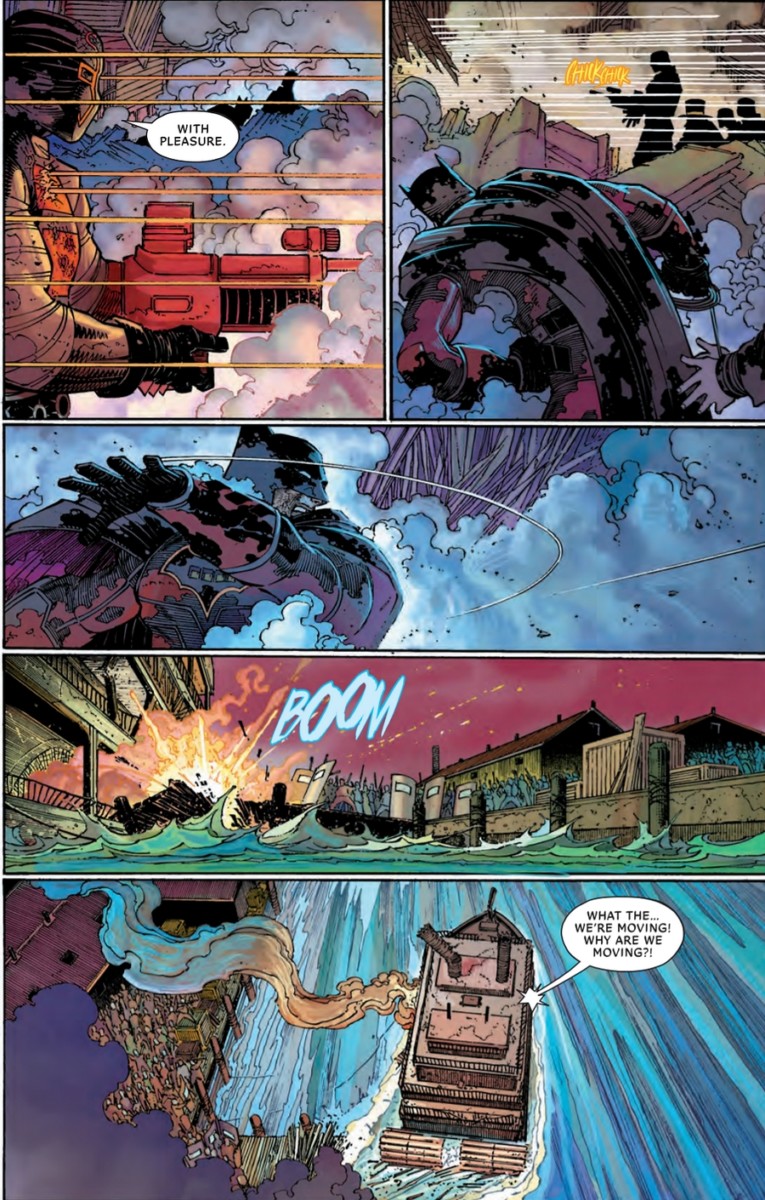 Harvey’s cure is a chemical that will literary burn away his weaker side, so his altered persona, Two-Face, can take full control. Harvey is tired of fighting his darker half and begs Batman to inject him with the chemical, deciding to finally surrender to the darkness. This doesn’t go well with Batman who has traveled miles and fought countless enemies to get Harvey to this location. Batman instead injects Harvey with a different chemical that will permanently have Harvey in conflict with Two-Face. So, if Harvey ever tries to take control of his mind and body, he’ll just have to fight harder with his opposite half and vice-versa.

It’s always refreshing to see the Dark Knight showcase his optimism underneath all that brooding demeanor. No matter how corrupt or insane, Batman still hasn’t given up on his fragile foe. Unlike Batman’s other villains, what makes Harvey special is that he did have a personal relationship with Bruce before he turned his life to crime. Snyder successfully builds on this idea through smart dialogue as well as showing glimpses of childhood memories from the character’s past in the overall arc.

READ: If you’re looking for a darker story, then Tom King’s latest BATMAN issue will satisfy your beast!

With the main conflict between Batman and Harvey/Two-Face aside, this concluding issue also reveals Alfred’s actions from past issues. Batman learns that even his butler acted against him in order to halt the mission to cure Harvey. Alfred’s desire to keep his secret opens a new discussion for the character as he describes himself as a hypocrite. Alfred often acts a moral adviser to Bruce, so it’s a bit surprising to see the the character act differently behind Bruce’s back. In Alfred’s defense, he was trying to protect Batman’s secret identity, but he fails to see that Bruce doesn’t really give a damn. It’s just upsetting to see this interesting reveal jammed in the last issue of the arc, since Snyder will probably never re-visit this conflict between the two characters in the future, but here’s hoping!

Duke, the other Boy Wonder, also fails to amuse. The character is just underutilized and isn’t given much to do in this issue. Duke could have taken part in some ass-kicking since Bats was still incapacitated by his visual impairment from the previous issue. Instead, this issue completely neglects Batman’s visual impairment. There’s no mention or indication on the status of Batman’s sight in this issue. We are to assume he somehow got his vision back—as if he’s some kind of a “Superman.” Snyder missed an opportunity here to further develop Duke’s character and to prove to readers that he’s more than just a sidekick. He could’ve been a useful guide to the blind Bat, maybe even lead the Bat through the disarray instead of just following orders and live in the Bat’s shadow. 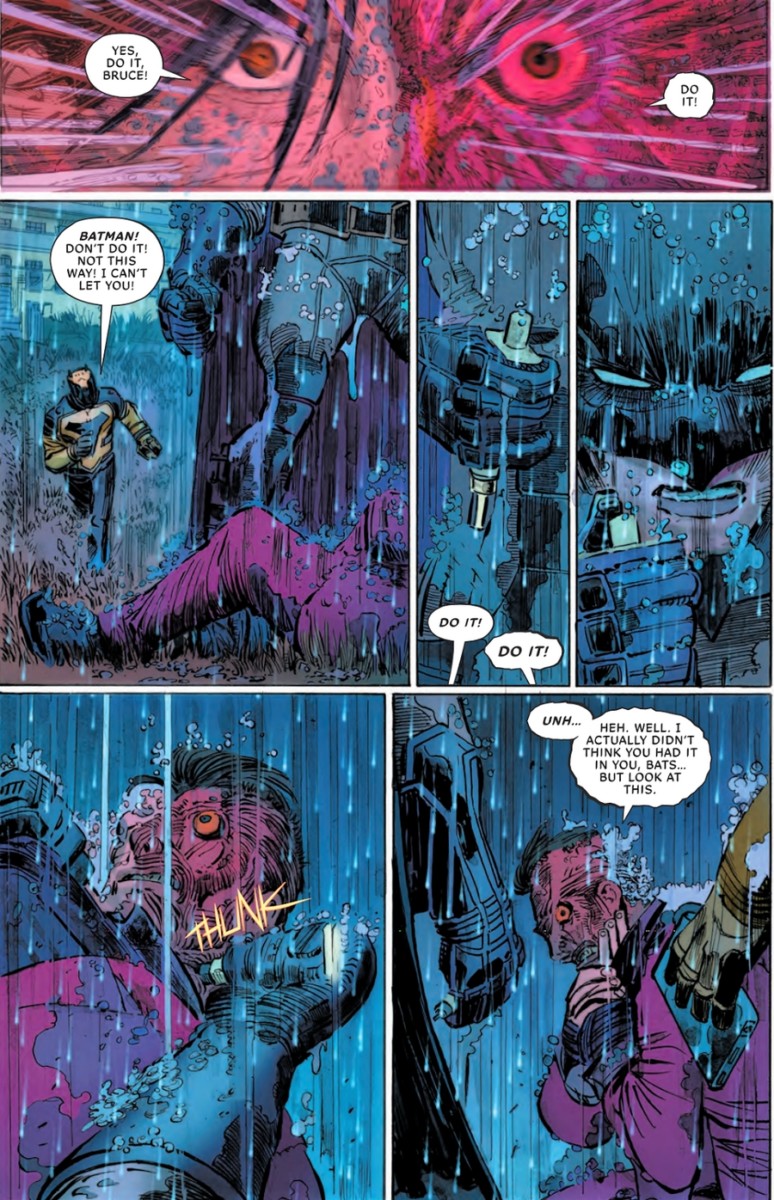 Despite the plot holes, the art of this issue does it justice for the most part. John Romita Jr.’s illustrations perfectly capture the gritty atmosphere. While certain action sequences are better executed than others, Romita Jr. doesn’t seem to hold back during scenes of crossfire, explosions, and close combat. His use of excessive facial lines, while distracting, creates tension and meaningful expressions on characters. Dean White’s coloring, however, is superb. White beautifully keeps the characters lit even in extreme conditions. Towards the end of the issue, the weather is portrayed as gloomy and when it rains, it pours. White makes each raindrop count, as they wash over the characters during pivotal scenes, adding a deeper layer to the overall mood.

While ALL-STAR BATMAN #5 doesn’t break any new Bat-ground, it is still one hell of a ride. The arc raises the stake for Batman as he encounters waves of villains while embarking on a trip to save a foe’s soul. But with so much build up from previous issues, certain subplots fall to the side while other parts leave you wanting for more explanation. The issue otherwise concludes an entertaining arc with gritty art while keeping us in awe of Batman and his road trip adventure.