In ALL-STAR BATMAN #4, Two-Face pours acid on Batman, leaving him visually impaired. Yeah, like a bat. Sounds a bit corny, but this adds to the over the top action and smart dialogue the series continues to offer. With the help of Duke (the next boy wonder?), Bats uses his wits and gadgets to get out of dire situations. The debut of chest and knuckle projectiles, which are way more useful than shark repellent, is memorable and adds to the list of wacky Bat gadgets showcased in the series so far. Remember Duke’s favorite metal band and their hit “Batman’s #$%”? Well, Snyder utilizes this past revelation to create a fun action sequence. Added with Batman’s tech, the power of heavy metal blasts away Two-Face’s Talons and saves Bat and Duke from drowning. 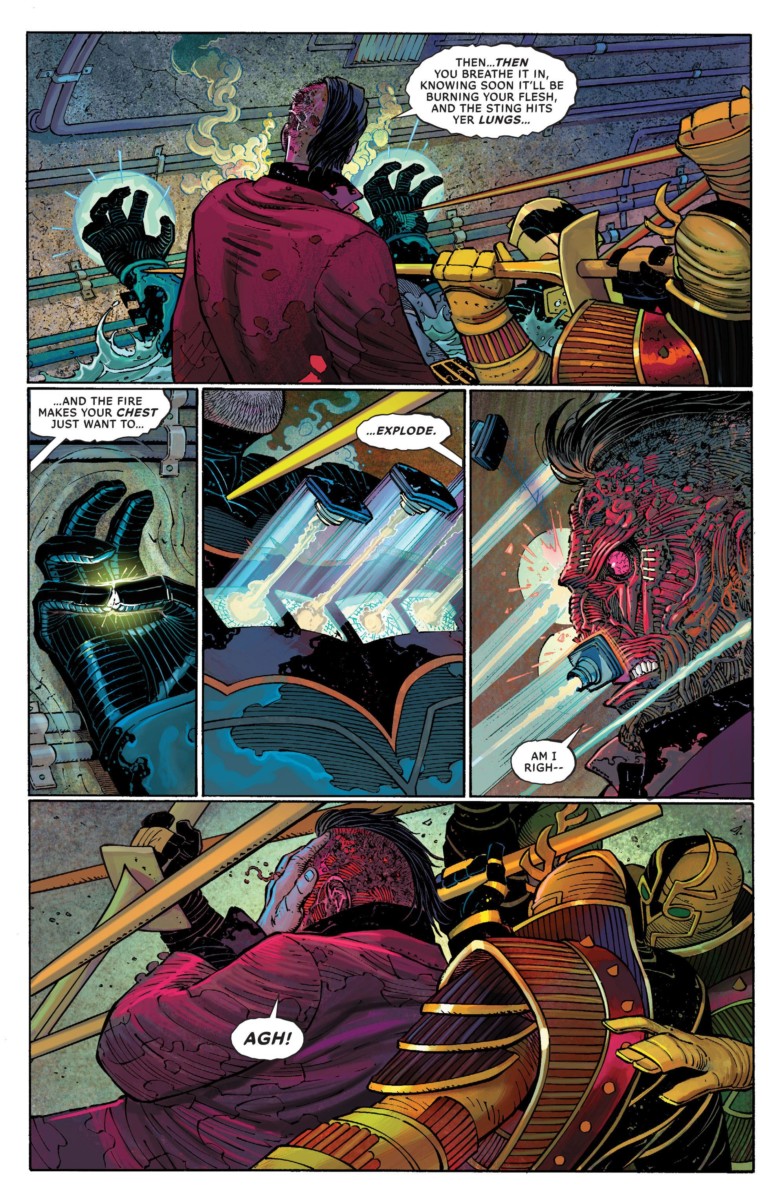 READ: Catch up on ALL-STAR BATMAN from the very beginning!

Along with creative action sequences, Scott Snyder’s strength in character dialogue is also superb. Despite the brooding and the blindness, Batman has never sounded so optimistic. The crusader explains to Duke how “We have to see people as we know they can be.” After everything Two-Face has wrought, Bruce still sees the innocent little Harvey inside Two-Face and will do everything he can to save him. This voice of hopefulness also wraps up Duke’s mini arc, “The Cursed Wheel.” Duke accepts the tragedy that struck his parents from the Joker venom, yet he remains head strong. Snyder’s use of the Joker in the dialogue is rather poetic as Duke explains how Joker attacks what he loves, and the same could be said about his helpless parents.  Duke expresses to Bruce, “That’s the motivation behind the blackness,” as he understands how much his parents loves him despite their aggressive behavior and condition.

Strong interchange and fun action sequences aside, the mission to get Two-Face to the unknown location halts as Batman, Duke and Two-Face are captured by the immovable KG Beast. It appears Snyder promises an epic ride to get you to the next destination, yet seems to be running out of tracks to get you there. This isn’t necessarily a weakness of this issue or the series thus far, but there’s a lot of unanswered questions and scenarios in the previous issues to re-visit; yet Snyder keeps throwing new threats from every corner. Batman is now blind, Duke is still in his training phase, Two-Face/Harvey’s internal battle continues and now there’s an angry mob added to the plate. All of this added content can leave the storytelling feeling unfocused. Yes, Batman always finds a way, but how much longer can we endure chasing and breaking of Bats until Snyder fully explores the attentive narrative of the past issues? This remains to be seen.

As mentioned earlier, Duke’s mini story also wraps up for now at the end of ALL-STAR BATMAN #4. While there is a strong element of character development, the overall arc itself felt like a mixed bag. Duke shows promising detective skills and heart as he uncovers the case of Zsasz. Yet there is no epic showdown between Duke and Zsasz at the end, which is a missed opportunity, as the Dark Knight swoops in to the rescue. There’s also a different art team for this short. While the overall art captures the facial expression and character interchanges with deep shades, it doesn’t create anything memorable. The mini-story excelled during Duke’s flashbacks of his parents, creating an emotional journey, but the conclusion leaves you wanting more of Duke’s solo venture.

READ: Batman teams up with the TMNT for a new adventure! 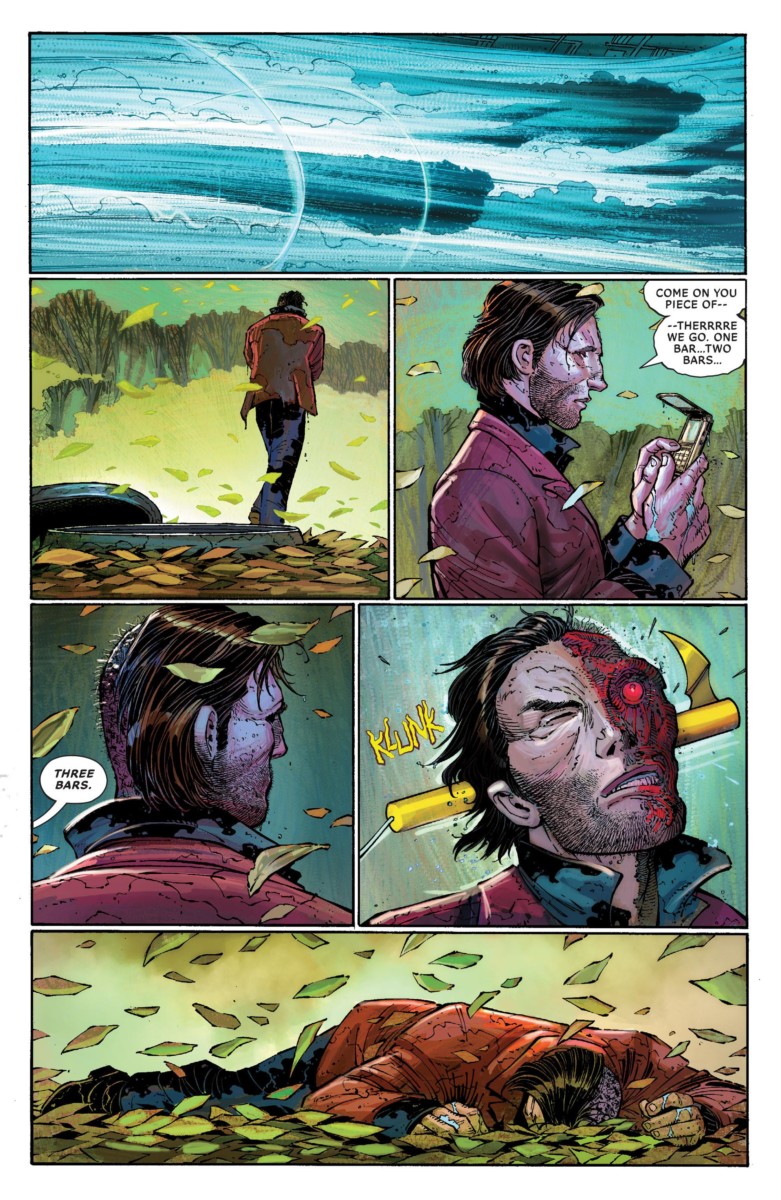 However, the major criticism with this issue and the series this far is the art style of the main story. While colorist Dean White and Danny Miki’s ink work pops the panels with strong visuals, especially the depiction of Batman’s limited vision, the pencil work of John Romita Jr. feels a bit muddled and unbalanced. This art style does catch the essence of over the top action and ridiculousness the series is going for, but certain panels looks awkward during action scenes and during the portrayal of many characters in limited panels. Harvey’s Two-Face looks like a T-3000 with the added unnecessary lines for facial details. The use of excessive lines drawn on character’s faces and bodies is a bit distracting and takes away from this action packed series.

Although the art style feels unstable at times, ALL-STAR BATMAN #4 is still a fun read. The issue grabs you with new Bat gadget action and puts you in the boots of a blind Batman full of hope. The story shows little progress of Batman’s mission but it seems there are more engaging trials and tribulations ahead for our caped crusader and young Duke to keep you coming back for more.