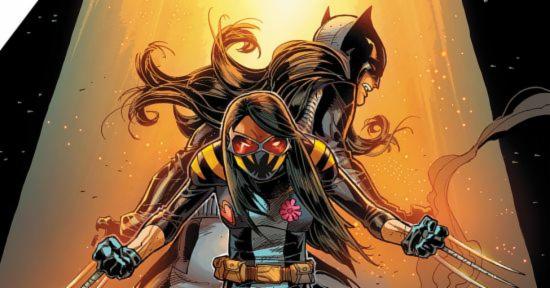 ALL-NEW WOLVERINE #20 opens with a scene straight out of BATMAN: NO MAN’S LAND. The Roosevelt Bridge is burned down, S.H.I.E.L.D guards and helicarriers keep people on Roosevelt Island, Iron Sight drones monitor the island, and people crowd hospitals. The narration tells us how the island used to house an asylum. This time, though, the sickness is physical, not mental.

The story starts proper with six of Marvel’s best scientists and doctors discussing the infected alien child from the last issue. No one understands the virus or why the alien sought out Laura Kinney. Hence, Laura’s clearly upset by the situation.

Laura represses all her anger and frustration that another rash of murders is linked to her. She also knows S.H.I.E.L.D will torch the island if they can’t find a cure. Ironheart arrives and allows Laura to unload her stress. Writer Tom Taylor crafts a great scene here. The female successors of Marvel’s two greatest heroes converse. Ironheart wisely lets Laura get her stress out before offering support. It’s good to see Laura interact with a peer in a way that feels unique to both characters.

Laura then investigates a disturbance, only to find her preteen clone, Gabby, on the beach. Like Ironheart, Gabby provides a voice of confidence to the beaten-down Laura. It’s a much-needed boost. While together, a rogue ambulance drives through the hospital with the alien girl inside. Gabby and Wolverine give chase, with artist Leonard Kirk’s art enhancing the scene. The multi-colored lights beautifully reflect the city and cars as Wolverine leaps from the bike to the ambulance. The whole scene feels like the inside of a very violent kaleidoscope.

READ: X-MEN GOLD #3 Review, or why Kitty Pryde is Awesome!

Laura finds A.I.M agents inside, working to stop the virus. An infected scientist explains that Laura may contain answers. Laura consents, but Gabby forces the group back to the hospital. A startling discovery is made: Laura can absorb the virus without injury to herself. This revelation is a fascinating twist to the story — after carrying all of that guilt around for years, Laura now has a chance to heal the sick and dying. Gabby also gets to say the best line in the issue.

ALL-NEW WOLVERINE #20 is a solid issue with some light character development, good action, and a promising ending. There are enough good moments for the comic to be an enjoyable stand alone. At times, however, the story feels like another chapter in a much bigger story. Laura and Ironheart interacting whets the appetite for more team-ups, and watching Laura be a healer instead of a killer opens up a new realm of possibility. Hopefully, the story can continue to succeed next month.