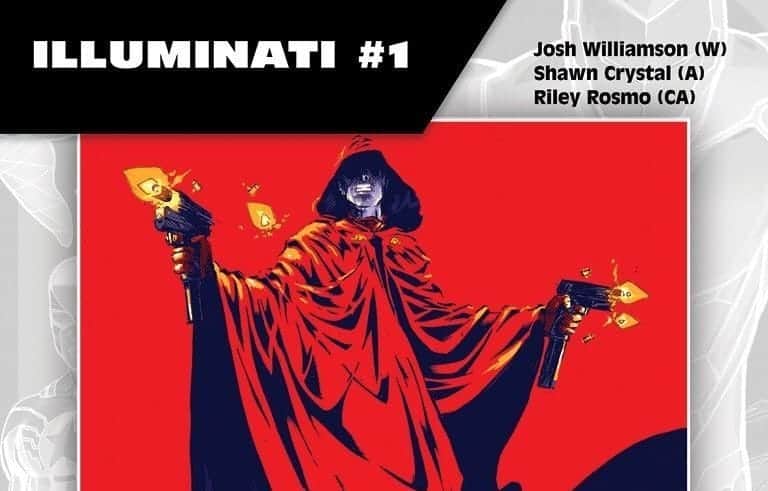 Marvel has just unveiled their post-Secret War plans in this Wednesday’s ALL-NEW ALL-DIFFERENT PREVIEWS catalog. Inside this free catalog, Marvel announced 45 new ongoing monthly titles all set to start coming out in October. With these new titles, new creative teams, and new directions, Marvel will surely be shaking things up this fall.

One of the titles announced on Wednesday was THE ILLUMINATI #1 written by Josh Williamson with art by Shawn Crystal and covers by Riley Rosmo. The tagline of the book reads “Forever evil.”

THE ILLUMINATI appears to have Parker Robbins, aka The Hood, leading a team of super-villains. For what? That hasn’t been announced yet. But if the Hood’s history in the Marvel Universe is any indication, what he has planned can’t be good. The supporting team has only partly been announced to date – you can see their silhouettes in the cover.  There are Titania and the Absorbing Man, Black Ant – an ex-Ant-Man turned villain – and Mr. Hyde. Hyde seems like a probable choice since the character’s appearance in Marvel’s Agent’s of S.H.I.E.L.D. television show. The furthermost right silhouette looks like it could be Moonstone, a regular on super-villain teams.

This is writer Josh Williamson’s first ongoing comic for Marvel. He’s best known for his creator owned comics at Image such as GHOSTED, NAILBITER, and BIRTHRIGHT. Currently he’s writing RED SKULL for Marvel, a “Secret Wars: Battleworld” tie-in, which is another villain-centric team book. Shawn Crystal will be providing the art. Crystal’s most recent projects include ARKHAM MANOR for DC Comics and Marvel’s FANTOMEX MAX. We also know that covers for the series will be provided by current CONSTANTINE: THE HELLBLAZER and RASPUTIN artist Riley Rosmo.

The All-New All-Different Marvel is shaping up to be a great place for heroes to save the world, but hopefully with THE ILLUMINATI we can also get a taste for the seedy super-villain underworld in this new status quo for Marvel.