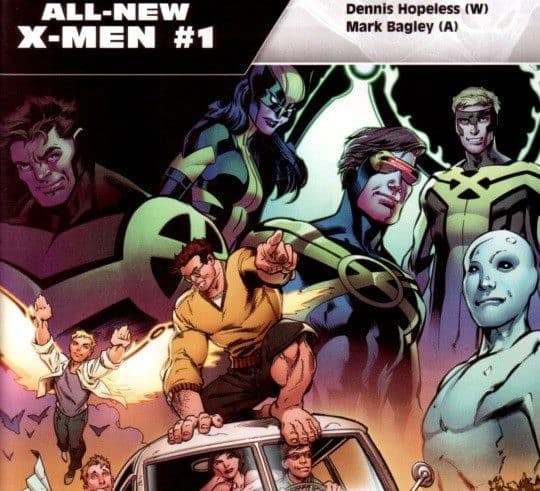 Among the announcements of the post-“Secret Wars” Marvel books, there is one title that immediately made me think that I’m going to have a great time reading it once it’s released. Dennis Hopeless and Mark Bagley will be the successors to Brian M. Bendis and Stuart Immonen and bring us the second volume of ALL-NEW X-MEN. Here’s why that book has so much potential!

Dennis Hopeless is not new to the world of the X-Men. He wrote an ongoing X-title for Marvel Now! (CABLE & X-FORCE), has written about the original five X-Men in X-MEN: SEASON ONE (a modernised version of the X-Men’s first days), and has even written X-23 in AVENGERS ARENA.  He’s experienced in writing grittier and darker characters and capable of humorous dialogues and creating a great team dynamic. So what could go wrong?

Mark Bagley is the man who started the Ultimate Universe together with Brian M. Bendis. He’s a popular artist, and with so many issues of ULTIMATE SPIDER-MAN, we can definitely say he’s experienced in drawing comics about teenagers. Together with the writer, who already had a soap-opera-esque approach on the original X-Men, this book could feel like the X-equivalent to those early days of ULTIMATE SPIDER-MAN!

For all we know, the main cast for this book consists of the original X-Men, except for the fact that young Jean, who will be in the main cast of EXTRAORDINARY X-MEN, the new flagship X-Men title, is being replaced by X-23, the new Wolverine. Which is an interesting choice. Laura is already familiar with the other team members, and it’s very likely that the book will further explore her relationship with Angel. And Hopeless will also have the opportunity to further develop the other members who were in the ALL-NEW X-MEN team from the beginning. For instance, Iceman’s sexuality could be a larger topic in this run.

It doesn’t seem like we’ll see Magik or Kitty “Professor K” Pryde in this book (given that Kitty has headed off to GUARDIANS OF THE GALAXY), but maybe, the creators just want to give those 5 characters more space for characterization and see how they work without the grown-ups. Which could be interesting. But these are just speculations.

To be completely honest, we know next to nothing about the setting of this book. But the promo image shows our main characters in a road trip kind of scenario, and the subtitle visible on that image says “On a mission to make their own future”. This all highly suggests that we will see the team away from their older counterparts/ the other X-Men in general for a while, trying to find themselves and to find out what they want their own future to look like. Independent teenagers. Who knows, maybe we will see them on an actual road trip, after all?

All things considered, there are many reasons why ALL-NEW X-MEN could be one of the greatest Marvel titles after “Secret Wars”. And I’m definitely looking forward to reading it!