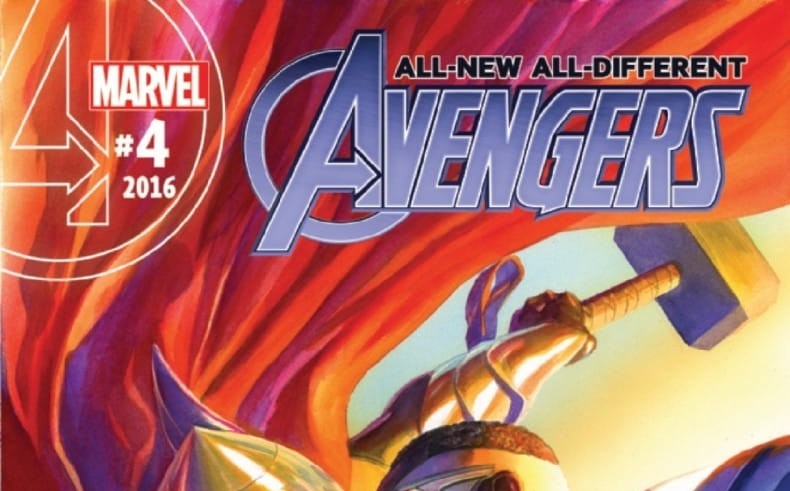 Now this is more like it!  After a slightly underwhelming first arc, ALL NEW ALL DIFFERENT AVENGERS #4 is a “done in one” story that sparkles with fun and action. I laughed out loud a few times. People in Starbucks, forgive me.

So what has changed? First of all, Waid’s comedy is in full flow here. Jarvis’ introduction to the brand spanking new Avengers HQ is hilarious in how underwhelmed his reaction is. And he has a right to be. Located in a condemned Stark building, gone are the ID badges and top notch security system. It instead smacks of a failing startup company. The Avengers are even reduced to painting their own Quinjet. Jarvis is not happy.

READ: Check out our review of ALL NEW ALL DIFFERENT AVENGERS #1!

From there, we move on to the first action set piece of the new Avengers as an official team. There is a nice gentle ribbing between the younger heroes which feels new and fresh. The adults act like, well, the adults, but it’s a delight to see seasoned heroes fight alongside the new batch.

Ms. Marvel seems to be the most fleshed out of the younger heroes. She’s quick thinking and eager to take down the bad guy. Miles doesn’t have a lot to do yet, but there does seem to be a friendship blooming between him and Kamala. Meanwhile, Nova is the Vision’s number one fan, but as we all know, there is more than meets the eye with that.

READ: Read our review of THE VISION issue 1 here! 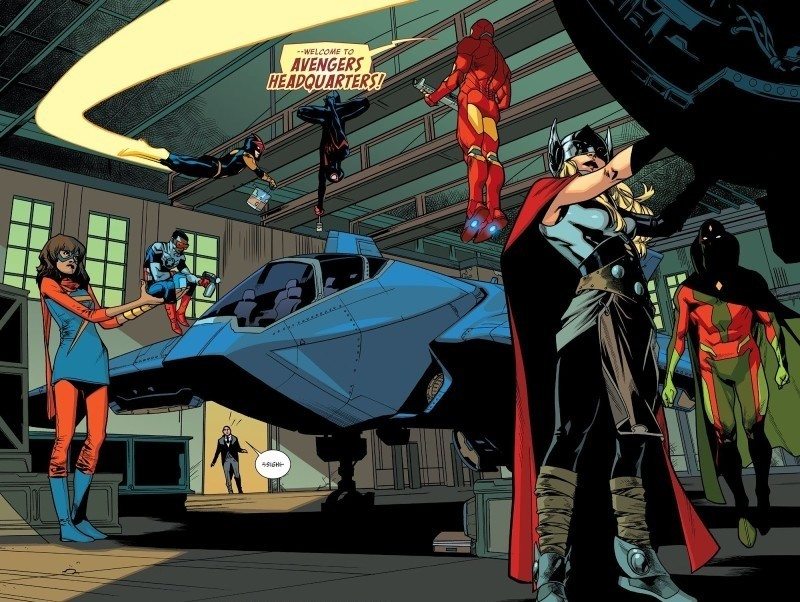 It’s not only Waid’s cracking script that makes it work; Mahmud Asrar finally gets to flex his artistic muscles after Andy Kubert’s run on the first three issues (outside of a mini – story in issue 1) and he certainly doesn’t hold back. His paneling and pacing adds layers to an already solid script. His inks are thick and full, and he is careful in his use of full page spreads. This is a book of mid shots and close ups. He knows this is a character-driven book with an ensemble cast, so the strong detail is in the characters, while the backgrounds are few and far between. Even so, the full page spread he does use almost sums up the powers/traits of our heroes. The use of coloring (kudos to Dave McCaig),in this spread especially, is at once poppy and colorful, yet it can also show us that the Vision is a character shrouded in mystery and shadow.

While the Vision is all sorts of weird and creepy (consistent with his depiction in his own awesome series) this issue shows us a side to the Mighty Thor that’s weirdly absent from her own book. While her series shows her as a goddess who is striving to do the right thing, this book shows her at her most joyous, enjoying this power, smiting where necessary and lip locking when she feels like it. This Thor is embracing what she’s been given. Yet, it also makes the other, older Avengers question who she says she is. 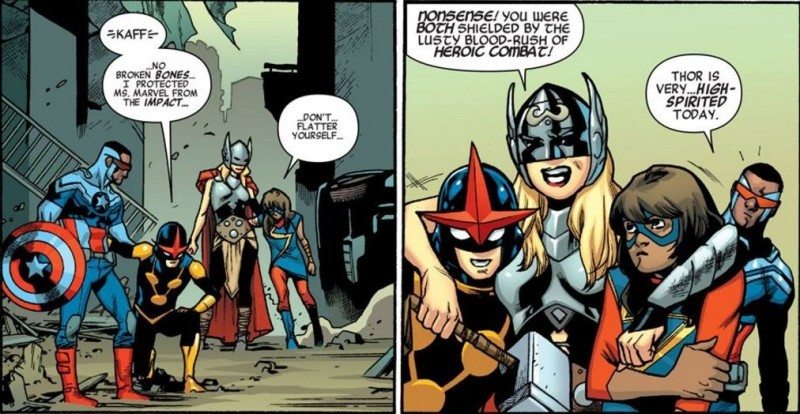 This is the Avengers comic I have been waiting for. ALL NEW ALL DIFFERENT AVENGERS #4 is a thoroughly enjoyable book, and I hope the sense of fun and adventure on show here carries through the rest of the run. Readers Assemble!

READ: Love Mahmud Asrar’s art? Of course you do! Check out his awesome website for more!

Agree or disagree with the review? Leave us a comment in the comments section below!