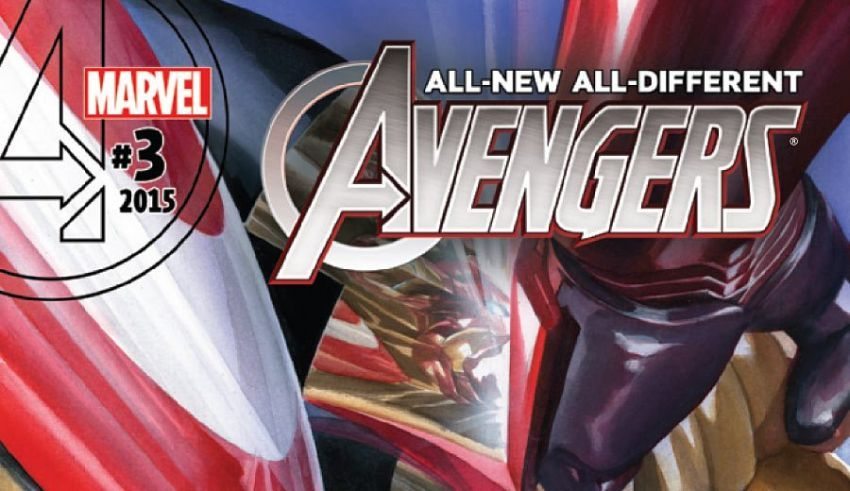 Wrapping up the first arc of the series, ALL-NEW ALL-DIFFERENT AVENGERS #3 finally gets all prospective Avengers together in the final smackdown with Warbringer for the fate of the world. Meanwhile in the background, the mysterious Gryphon has nefarious schemes in play. Will the Avengers overcome their differences and defeat Warbringer? I’ll give you three guesses.

While there was nothing wrong with this issue, so far this newest incarnation of the Avengers has failed to grab me. All the heroes on display here are great additions to the team, but the combination feels very mixed, and some don’t really have much to do in this issue, only adding a few quips here and there. 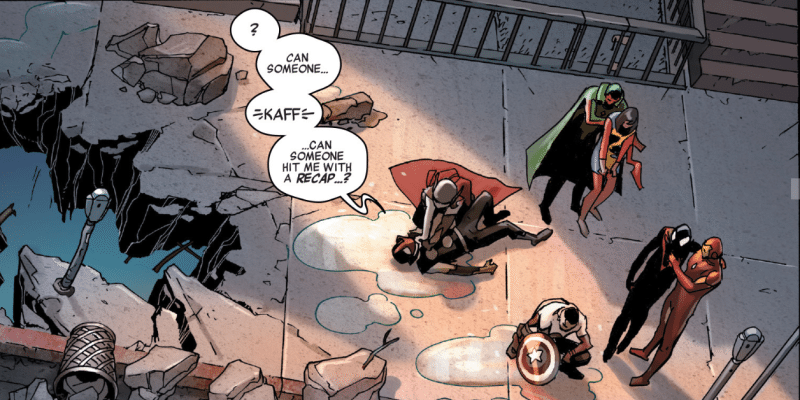 Sam Wilson really takes a back seat here as Iron Man takes control of the heroes and hatches the plan which could defeat Warbringer. I love the CAPTAIN AMERICA: SAM WILSON series, but here it feels like he’s back to being regulated as the Falcon. However, this could be down to trying to highlight the younger Avengers: Nova, Spider-Man, and Ms. Marvel. Of the three, Nova has the biggest throughline, as he blames himself for Warbringer returning to earth, and it dictates his actions, partly trying to cover it up, but also taking responsibility.

The highlight of the book though is how Vision interacts with everyone. Very much carrying over from his portrayal in his own series (and definitely pick it up, as it’s amazing), he watches everyone, observing his colleagues in action and taking a dark interest in Nova. Something is up with Vision; there is something clicking within his synthesized head. 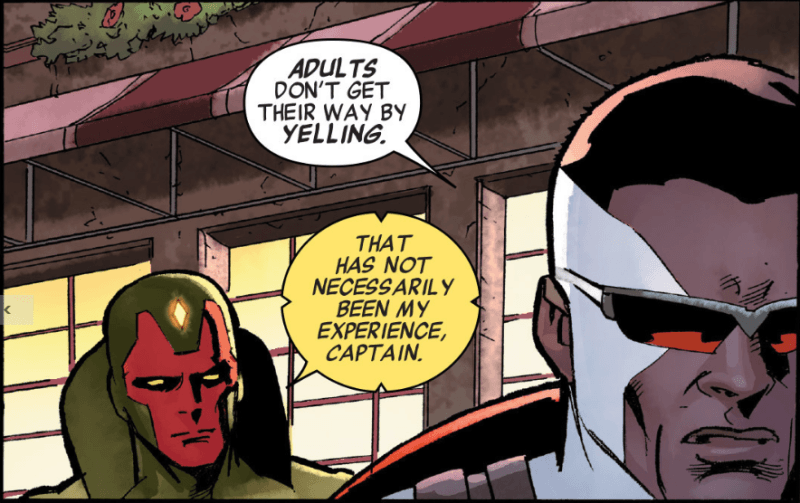 READ: Check out our review of the fantastic THE VISION #1!

This book should be a lot more fun. Mark Waid is a phenomenal writer. His DAREDEVIL run was spectacular, and we all know he can write great heroes, but it falls slightly flat here. It feels like a slow slog to getting the Avengers assembled. Iron Man’s assumption that they raised each other’s game doesn’t quite ring true, as these are amazing heroes in their own right. Some may think they could be inspired to be stronger team players, but it feels like it could potentially stifle these heroes. Despite this, there are intrigues here; you can never have enough Kamala Khan, and the Vision is one Avenger to keep a close suspicious eye on.

Adam Kubert gives it his all, and there are some strong images that come across that feel exciting. At the same time, a few panels have very heavy line work, almost changing the style of the art, which brings you out of the reading experience. Strangely, color artist Sonia Oback, who gives great depth and shading to the characters, gives those exact heavy lined panels an even more different look.

As the Avengers book, this will need more to keep me interested. The issue 0 from New Comic Book Day was exactly what I expected from this series, the sense of fun and danger, but ALL NEW ALL DIFFERENT AVENGERS has not lived up to its potential… yet.

READ: DO THOR AND CAP HOOK UP IN ALL NEW ALL DIFFERENT AVENGERS #4? CHECK OUT OUR PREVIEW HERE!