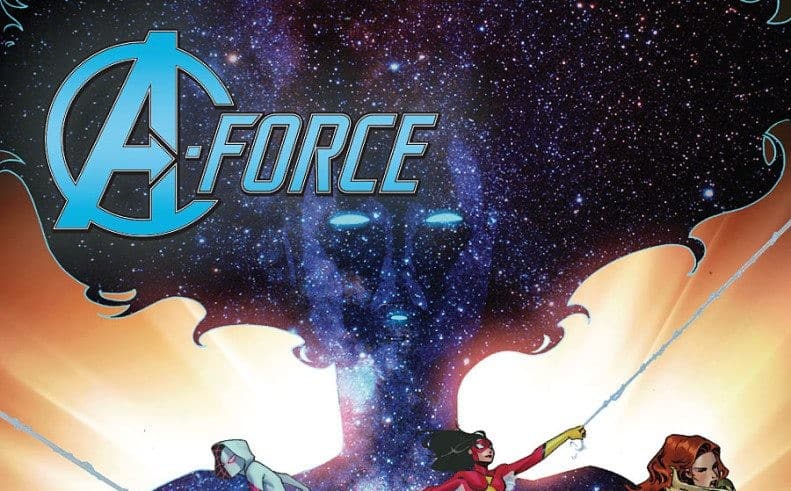 Between A-Force, Captain Marvel and the Carol Corps, and other comics with a strong and large amount of female background characters like Spider-Gwen, it is safe to say that there is a new trend in the world of comics: female populated universes. While some are declaring this to be the newest gimmick, I must respectfully disagree and call out that statement as what it really is, total bologna, by going through not only the history of comic book gimmicks, but also the history of popular culture gimmicks in general. First on the docket is the… 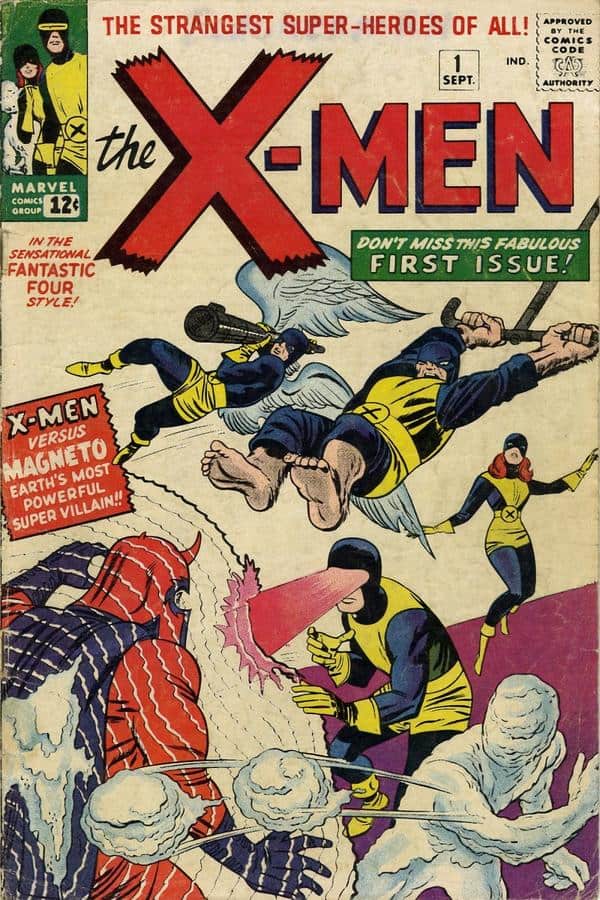 It is no secret that the first superheroes were all male. They populated male dominated universes too – must be a gimmick – but anyways once that started to get stale, the writers had to think of something new to spice up the entire situation while also capturing a whole new market. One of the first famous female superheroes was Wonder Woman, but from this came many more females; Jean Grey, and Supergirl are too particular stand outs. During the 60s when this trend took hold it was a gimmick, and the female characters were usually used as little more than love interests (even Professor Xavier fell in love with Jean Grey!). As the 60s went on, the women became a way to bring in new stories, and a way to bring in new readers, female ones.

From the powerful position of the future, we have looked back on the introduction of the singular female character and called it the Smurfette Principle. Basically, the Smurfette principle is a trope. An example would be, there is a world that is populated only by men so the writer of this piece of fiction introduces a female version of the male characters to mix it up. (I would highly suggest this video, which gives a much more in depth analysis of this principle’s side effects). According to this definition it would not seem that the trend of introducing a singular female character wasn’t exactly the most feminist decision, they are basically just token characters whose main trait is that they are women. However, this gimmick was perhaps a necessary evil.

Overall, this marked the introduction of what could be called a very progressive change; women were introduced into narratives as major characters, although often they are little more than plot points or love interests.  Stan Lee famously struggled to remember just what Jean Grey’s powers were!  Nonetheless. the status quo was changed. Nowadays, if a comic implied that women could not be superheroes – or had no strong female characters – it would feel archaic.  And if there is a single female character (say, perhaps, the first AVENGERS film), it is important to rectify this situation in the second film by introducing another female superhero or five. Female participation in a narrative is becoming more and more expected and necessary, although it may not be as present as we all wish it is definitely there, and if a character has any female character it is not lauded as a gimmick today. Okay, there is one trend that stood the test of time. On to the next one… 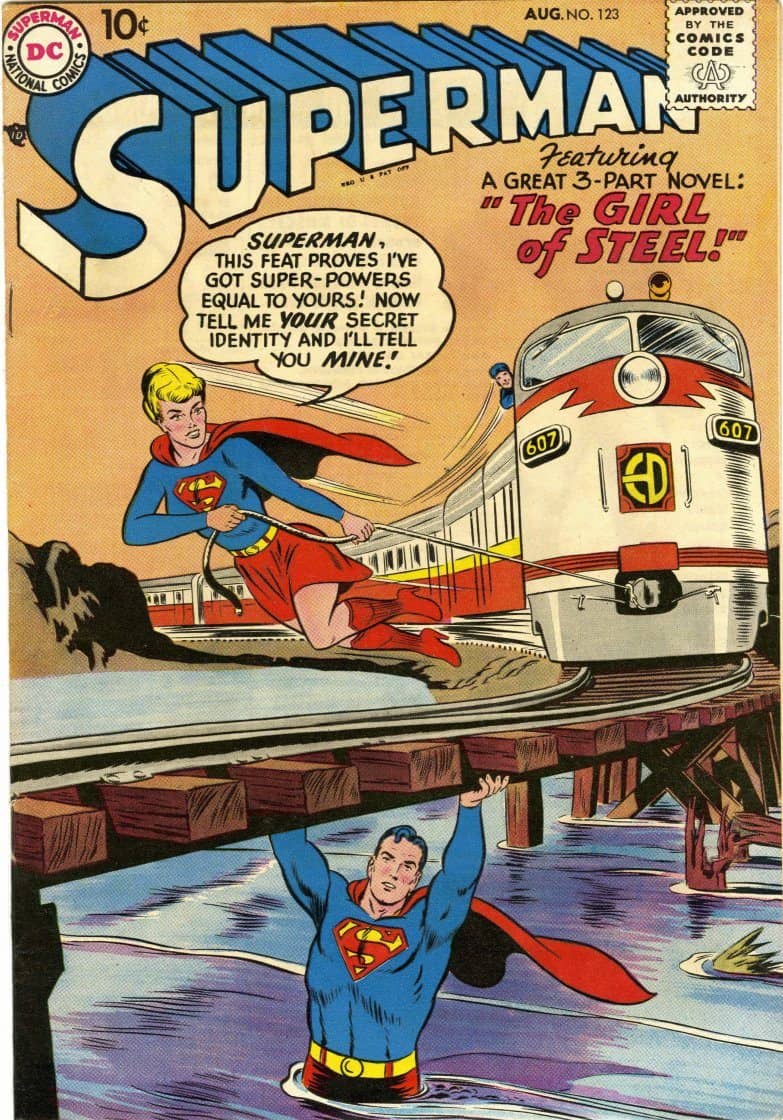 We all know that Supergirl is her own superhero entity with her own distinctive background story. She definitely isn’t an attempt to just take all of the same superpowers that made Superman, add a uterus to it, and call it a new idea. You know like Spider-Woman and She-Hulk, original female superheroes. Just kidding, of course all of these superheroes were exactly that. They came from the idea that a sequel comes from. Superman and Spider-Man were popular, but we need a new twist. Oh I know we’ll make them women because we all know that women are vastly different creatures so that should be an interesting twist. Superman can go shopping now and knit. 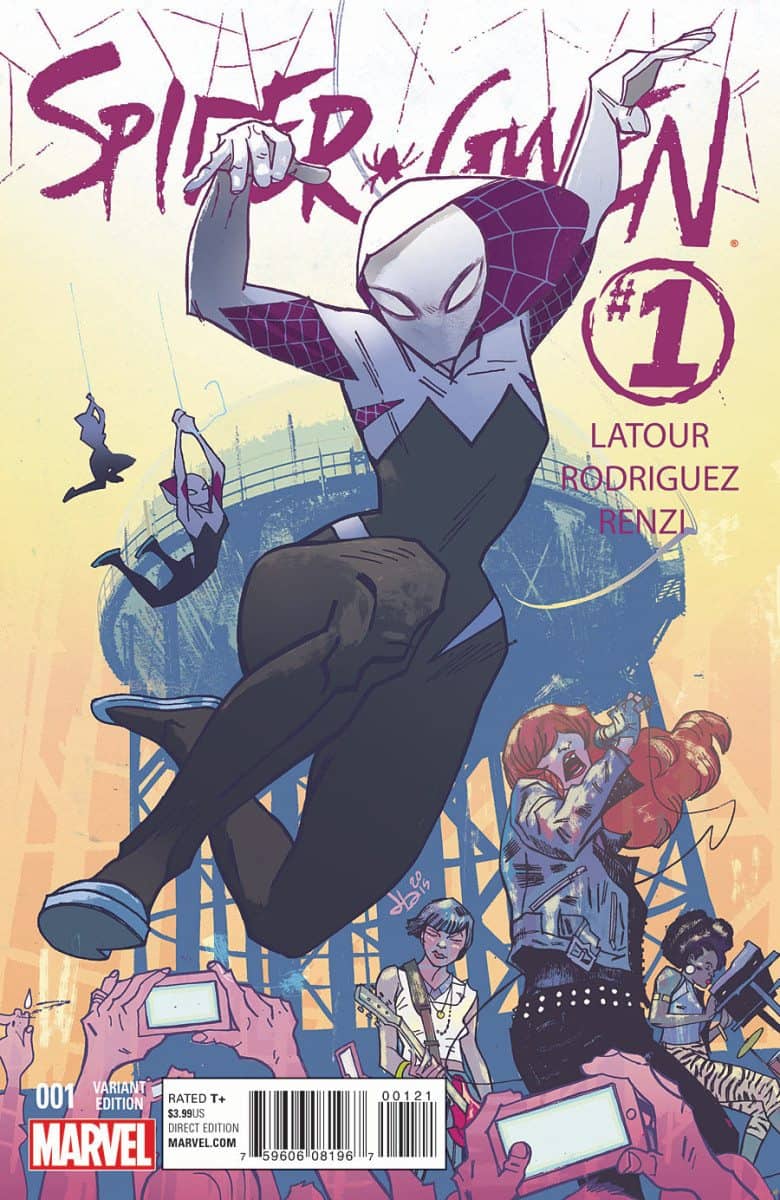 Despite the sometimes lacklustre stories that were spawned from these gender changing decisions, Supergirl is definitely an example of a character that has come to take on her own persona outside of her relationship to Superman. She-Hulk has even been utilized recently to head up the all female team in A-Force, in addition to have her own comic in the past. The most impressive feminized superhero to come out of this entire concept has to be Spider-Gwen. This comic has been extremely popular not because people wanted a female version of Spider-Man, but because the character of Gwen Stacy is very interesting as the Spider-Woman, I mean she’s in a punk rock band with Mary Jane. In addition, let’s think about the recent storyline of Thor. In that situation, Thor was simply a woman this time around, and even though there was lots of controversy around it there is no doubting that the story wasn’t about what happens when a woman wields the hammer. No the story was just about this women and her life as the goddess of Thunder. Overall, the gimmick of turning a superhero into a female hasn’t only stood the test of time, but it has also been turned into something that isn’t focused on cashing in on what made the male superhero cool. Instead it is about exploring this awesome female character as a superhero. On to another recent trend… 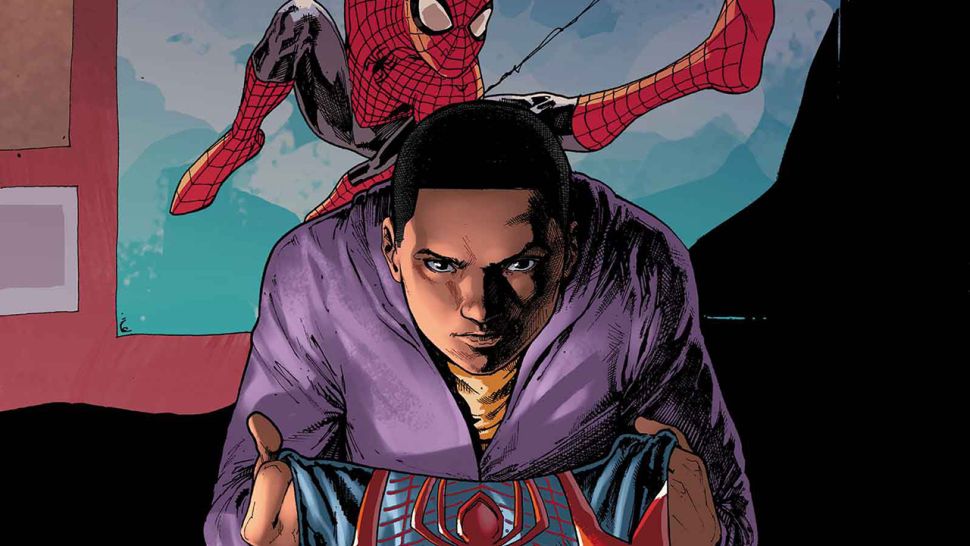 There have been What-If and Alternate Universes, but until recently there hasn’t really been as many attempts by publishers to try and hold onto the fervor around a certain property while also creating a more diverse comic. The most recent examples of this are Miles Morales becoming Spider-Man in the Ultimate comic and Captain America being taken over by Sam Wilson who was previously the Falcon. Both changes were hit with the same age old criticism that this change was a part of a political correctness stunt, and that it was merely gimmick, but nonetheless the change occurred.

I have to admit that this change hasn’t been given as many chances to get a foothold in society, but not only have they been widely covered and embraced by critics, but also by the fans. Miles especially has become a fan favorite who is going to brought into the main Marvel continuity as a true Spider-Man in the fall. However, this change has not been without any push back, considering the fact that in emails about the Marvel Cinematic Universe Sony executives argued that Peter has to stay Spider-Man because he is an inherently a heterosexual caucasian male character. But this is not an industry-wide issue, even Andrew Garfield aka two-time cinematic Spider-Man believes that the story makes more sense with a gay teen.  He also says that it would hardly be progressive to have a Bisexual or Gay Spider-Man and he is one hundred percent right. So to the idea that a racially diverse teen will be present in the comics at least is definitely here to stay. Especially by the launch of the new Spider-Man comic. So…

The Verdict on the Gimmicks 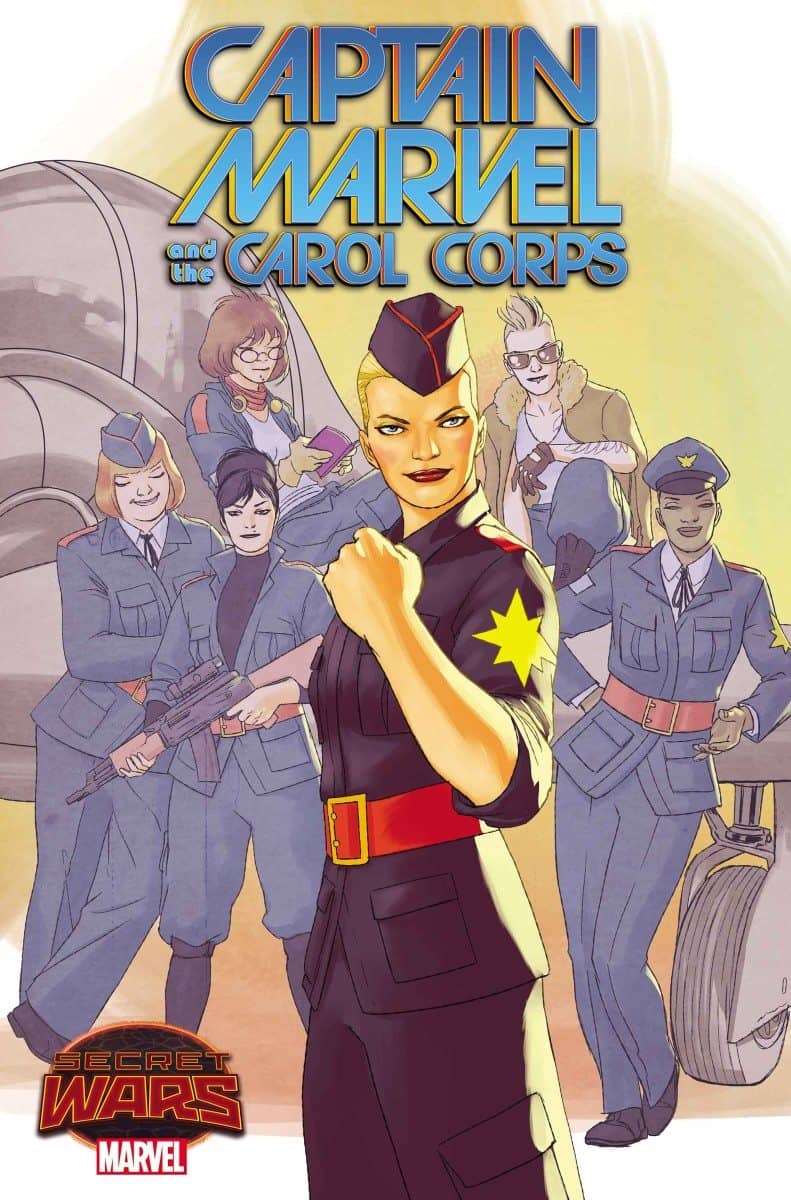 The backlash to some of these gimmicks, even calling them gimmicks is a part of this, gets back to some of what annoys me so much about the response to any of these changes: female populated universes, feminizing male superheroes, or changing a superheroes race. Why does it matter if a company is attempting to be politically correct? Why does it upset someone if the gender or race of a character is changed? One theory I maintain is that perhaps the criticizer is white and male and they are afraid that they are not being represented by this story. Well, to that criticism I would like to say that for about fifty or more years the people who are now being represented have felt that way. They have not been the protagonist, and they have found ways to identify with these characters in spite of it, but representation is just better. It makes the reader feel heard, and that is what these stories are supposed to do. They are supposed to show us things about ourselves or the world that we didn’t realize before. Well, now we’re exploring more stories and that is better for the world. By reading we empathize with different people and circumstances so the more diverse or protagonists the more we’ll understand each other.

Another criticism leveled at the female universe gimmick is that it is too much one way. Instead, there should be equal integration of male and female superheroes. Well, to that I have a few thoughts. The first thought isn’t even mine, but it is certainly a statement that I agree with whole heartedly. John Oliver recently ran a piece on Last Week Tonight about the decision to put a female on the ten dollar bill. Women had initially asked to be placed on the twenty dollar bill, but instead they were placed on the ten dollar bill and some of them will still feature a man. To that John Oliver said, “This is the perfect embodiment of the women’s right movement. Women ask for something they’ve earned. A bunch of men get together and talk about it, and then they give the woman half and ask her to share it.” And I think that is a pretty good response to those who believe a female populated comic is too much the wrong way. Because, to add a personal two-cents to it, I am a woman and most of my close friends are women. So that means that when I tell stories about my life they tend to involve only women, so a universe populated with only major characters that are women is true to my life in the way that an all male comic could be real to many male readers.

Diversity of representation does not mean that certain types of comics aren’t welcome. What it means is that you need to tell a large number of stories that apply to many different backgrounds. The addition of people of color and women to the canon of superheroes may have started as an attempt to spice things up, but clearly their integration into the community has been well received and hopefully publishers will continue along with the positive representation they began experimenting with fifty years ago. So the verdict on all female comics? Not only does it seem like they provide a much needed new perspective, but they will also definitely stand the test of time as all of these other diversity gimmicks have.