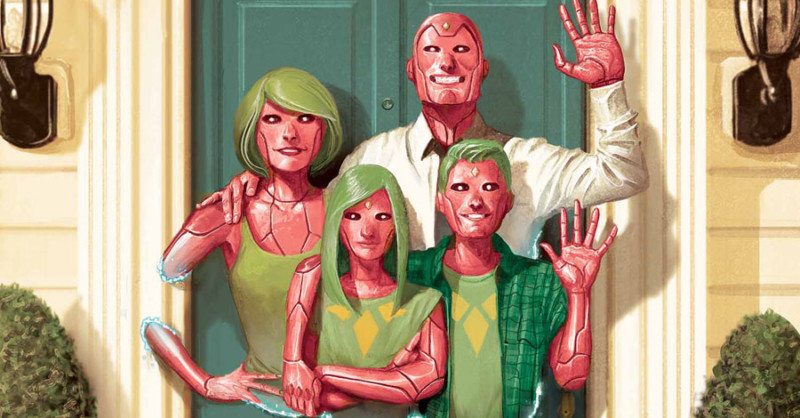 Written by Tom King, VISION, from Marvel, is the story of Vision and his family. Vision is a Synthezoid, created by Ultron to destroy the Avengers. However, he has put all of this behind him. Now, he only wishes to be normal. So, he creates a family for himself—a wife, a son and a daughter—and they move to a suburb in Virginia. Vision still works for the Avengers, but what he and his family want more than anything is just to be ordinary and to live like humans. Nothing could possibly go wrong, right?

READ: Interested in VISION? Here’s a cool review of the first issue of the series!

As you might imagine, this comic gets dark fast. Not only does it deal constantly with existentialism, absurdism, identity, and linguistics, but the plot itself just gets darker from the first issue onward. In short, the VISION series examines what happens when people who are very non-human try their hardest to be human. If you’re into philosophy and the study of language, this comic is definitely an interesting one. If you aren’t into those things, you’ll probably still like it–because it’s that good. This comic is full of suspense, keeps you on edge, and reveals a side of Vision that has not been seen before. Because VISION is a highly intellectual comic with just the right amount of action, it has earned a well-deserved place on this list. 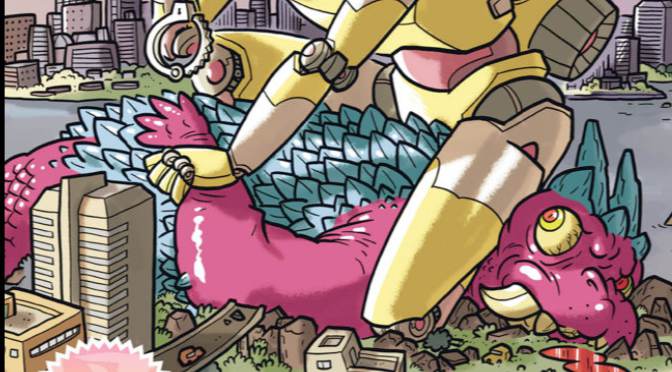 KAIJUMAX, from Oni Press, is easily one of the most interesting and original science fiction comics of the year. It takes place in a prison called Kaijumax, which sits on an island in the South Pacific. However, this is a prison for monsters. Some of these monsters really are bad, but some of them just exist, which, in the eyes of humanity, is wrong. So, they are taken to Kaijumax. The story follows Electrogor, a giant bug-like monster, after he arrives at the prison. Electrogor must learn who he can and cannot trust and how to interact with the many other monsters around him.

READ: Love KAIJUMAX? Check out this interview with its writer, Zander Cannon!

The art of KAIJUMAX is wonderfully original, and at times, even cute. There are many different monsters in all sorts of forms, often colored brightly and vividly. Writer and artist Zander Cannon really puts effort into the relationship between the art and story, and it works out perfectly. The appearance of many of the monsters outwardly shows their personalities, and the expressions that he gives to the very non-human faces are very well-done. The characterization comes in immediately as characters are introduced, giving the readers a sense of what each character is like the moment they meet them.

Inspired by ULTRAMAN and nominated for an Eisner Award, Kaijumax is an extremely visually pleasing, comedic, and just plain well-written comic series. It’s absolutely worth a read, which is why it’s the fourth best science fiction comic of 2016. 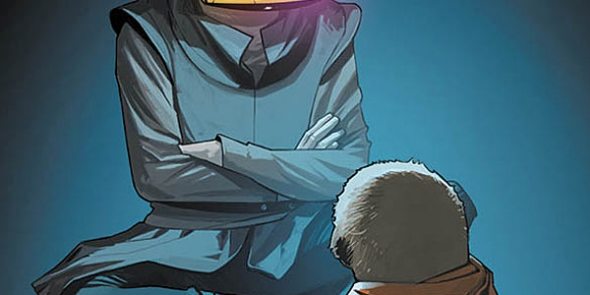 I’m sure you knew it was coming. SAGA, from Image Comics, is a generally well-known and loved comic by writer Brian K. Vaughan and artist Fiona Staples. It’s been a long journey for the characters of SAGA, and now, finally, the family is reunited. This one is complicated, however, because there wasn’t a single story arc written in 2016. There was the 2015/2016 story arc, and now there is the most recent (and ongoing) 2016/2017 arc. The earlier arc follows the continuation of Marko and Alana’s rescue mission, along with the less heartwarming and more heart-wrenching side plot of The Will. The arc ends with the touching reunion of Alana, Marko, and Hazel. However, The Will doesn’t seem to be much better off. In fact, it is only a hallucination of his dead sister that stops him from taking his revenge on innocent victims.

READ: Haven’t read SAGA yet, and want to understand the hype? Here’s an interview with some of our staffers about what SAGA means to them!

The second arc of 2016 follows the family as they are forced to land on the war-torn comet of Phang. Here, the family gains even more additions, but they lose loved ones as well. Unfortunately, but not unexpectedly, tragedy befalls them. I mean, what would SAGA be if it didn’t rip out your heart every once in a while? Actually, it rips out your heart fairly often; although, that may be what makes it so captivating. Brian K. Vaughan’s writing is possibly some of the best out there, and Fiona Staples’ art really ties the comic together in a truly beautiful way. Despite that the second story arc of 2016 isn’t even finished, SAGA is still coming in at #3 for the best science fiction comics of 2016. A story so loved by so many deserves nothing less.

Oh, man. If you haven’t checked out this amazing series yet, you need to. I mean, you need to do that right now. Black Mask Studios has put out a fantastic comic, written by Magdalene Visaggio and illustrated by artist Eva Cabrera. KIM & KIM is a seriously intriguing comic that takes place in an Omniverse. It’s a punk spin on modern science fiction–not to mention it’s mega LGBTQ+ positive. A brief description of the insane and beautiful story of KIM & KIM is that it is about a trans girl and her “platonic significant other” who are both named Kim. They fly around the Omniverse in a hippie van that is “eighty zillion years old and made out of old soviet tanks” (probably) and just do tons of other super awesome stuff.

READ: Does KIM & KIM sound awesome? That’s because it is! For more info on just how awesome it is, check out this review of the first issue!

The art of KIM & KIM is just about as cute as I’ve seen comic book art get, and it’s fairly reminiscent of the SCOTT PILGRIM comics. Although I have to give it to Eva Cabrera, she even tops them in levels of cuteness. The colors are so vibrant too, and wonderfully reflect the attitudes of the characters. The plot is also absolutely heart-warming. It celebrates the bond and power of femininity and shows that just because you aren’t accepted by everyone doesn’t mean you aren’t important; those that truly love you will accept you and love you unconditionally.

KIM & KIM is the story of friendship, camaraderie, LGBTQ+ empowerment, necromancy, octopus people, and good, old-fashioned girl power. If you haven’t picked up this series yet, get ready to have the wackiest punk rock science fiction ride of your life. And, for that totally awesome reason, KIM & KIM is coming in at #2 for the best science fiction comics of 2016. 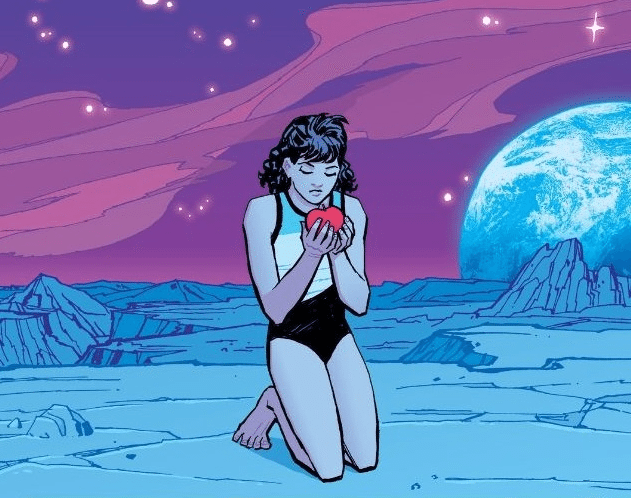 Time for the #1 science fiction comic of 2016: PAPER GIRLS. This new and absolutely out of this world comic from Brian K. Vaughan deserves every bit of hype that it has gotten. The series started back in October of 2015, but the majority of the issues have been published in 2016. The second arc just ended this fall, and man, was it crazy. This comic was a hook from the very start, due to the art, the weirdness, and just how quickly it got dark. However, we’re talking about 2016, so let me jump ahead a little bit to issue #4, released in January 2016. So, about that “hook” in the first issue, let me rephrase: this is the issue that really, really pulls you in. The first few issues are great, don’t get me wrong. Issue #4, however, is where the plot really kicks in. From issue #4 to the most recent issue #10, PAPER GIRLS has been an absolute hell of a ride. Rarely have I felt myself become so quickly engrossed in a comic book, and so connected to the characters. There really isn’t a bad issue out of the bunch or anything even approaching mediocrity.

So, let’s start with the art. I may be a little biased because the art of PAPER GIRLS hits my color aesthetic nail right on the head, but it is just downright amazing. All of the purple, pink, and blue hues combine to give the comic an ethereal feel, which is perfect for the plot. Color contrast is utilized fantastically as well, with extremely bright, vivid colors being used over very muted ones for emphasis of the otherworldly. Artist Cliff Chiang definitely got it right on this one.

The plot and characterization of PAPER GIRLS is wonderful as well. For some, it will be an instant hit of nostalgia as it “takes place” in 1988. A more accurate statement, however, would be that it starts in the ’80s and the characters get pulled right out of it and straight to 2016, to be exact. The modern setting also creates an opportunity for today’s youth to enjoy the story, as they may not be able to relate to the nostalgia that the older audience might feel. This comic is chocked full of time travel, and I don’t mean the simple, easy to follow kind. I mean this stuff gets confusing; just wait until the clones get involved. It’s also a great coming of age story for young girls who are trying to fit in, and might not have found people they consider friends yet. The main character, Erin, is just this type of girl. However, after meeting the other paper girls, she starts to gain confidence in herself.

PAPER GIRLS from Brian K. Vaughan and Image Comics might be one of the best up-and-coming comic series of the past few years. There are only ten issues out at the moment – and I promise, if you start reading them, you’ll more than likely fly through all ten in just one sitting. However, the next issue doesn’t come out until February. So, if you don’t want to be dying with suspense after the absurd cliffhanger at the end of issue #10, you may want to wait a month to read them. With awesome racial, women, and LGBTQ+ representations, this comic is practically the definition of feminist intersectionality. Not only that, but it is a great introduction to the concept of intersectionality through an absolutely amazing and beautiful science fiction coming of age story. So, for all of these reasons and more, PAPER GIRLS is absolutely the #1 science fiction comic of 2016.