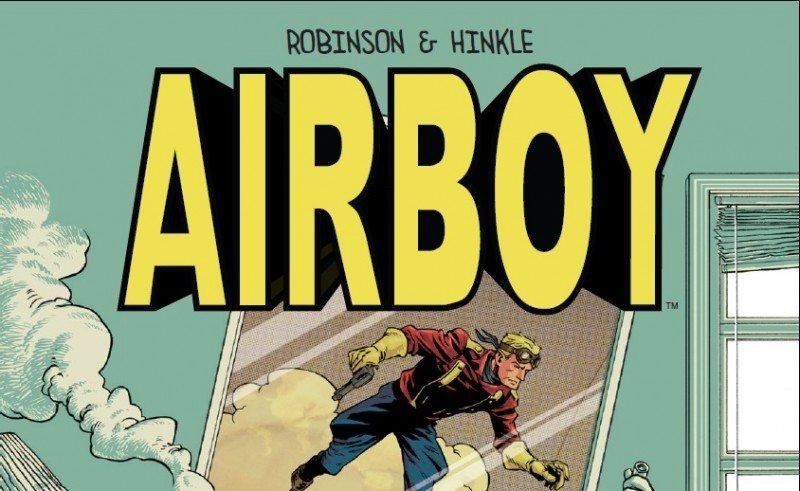 David Nelson Jr., the WWII high flying hero Airboy, first appeared in AIR FIGHTERS COMICS #2 in 1942. He became popular enough that AIR FIGHTERS COMICS was renamed AIRBOY COMICS in 1945, with his adventures continuing until 1953. He eventually fell into the public domain with various attempts at comics revivals during the 1980s, 1990s and 2000s. Each made valiant attempts at relaunching the character but, for whatever reason, he never stuck around too long.

READ: Check out why Image comics is one of the top publishers in the comics industry!

Enter James Robinson’s and Greg Hinkle’s fresh take on the flying ace. Well…maybe ‘fresh’ is the wrong word. Perhaps drug addled, sex crazed, psychedelic, offensive, grim, graphic, hilarious, and meta are better words. The four issue mini series, which was launched in June 2015, is a semi-autobiographical (give or take some creative licence) look at writer James Robinson during a pretty grim period of his life.  It’s a behind the scenes approach as he and Hinkle go through the arduous process of ‘re-imagining’ AIRBOY for a new audience. Their creative block leads to a drink and drug fuelled bender which ends in Airboy himself confronting them. So far, so meta. The rest of the series focuses on their relationship with Airboy and their subsequent adventures in WWII. 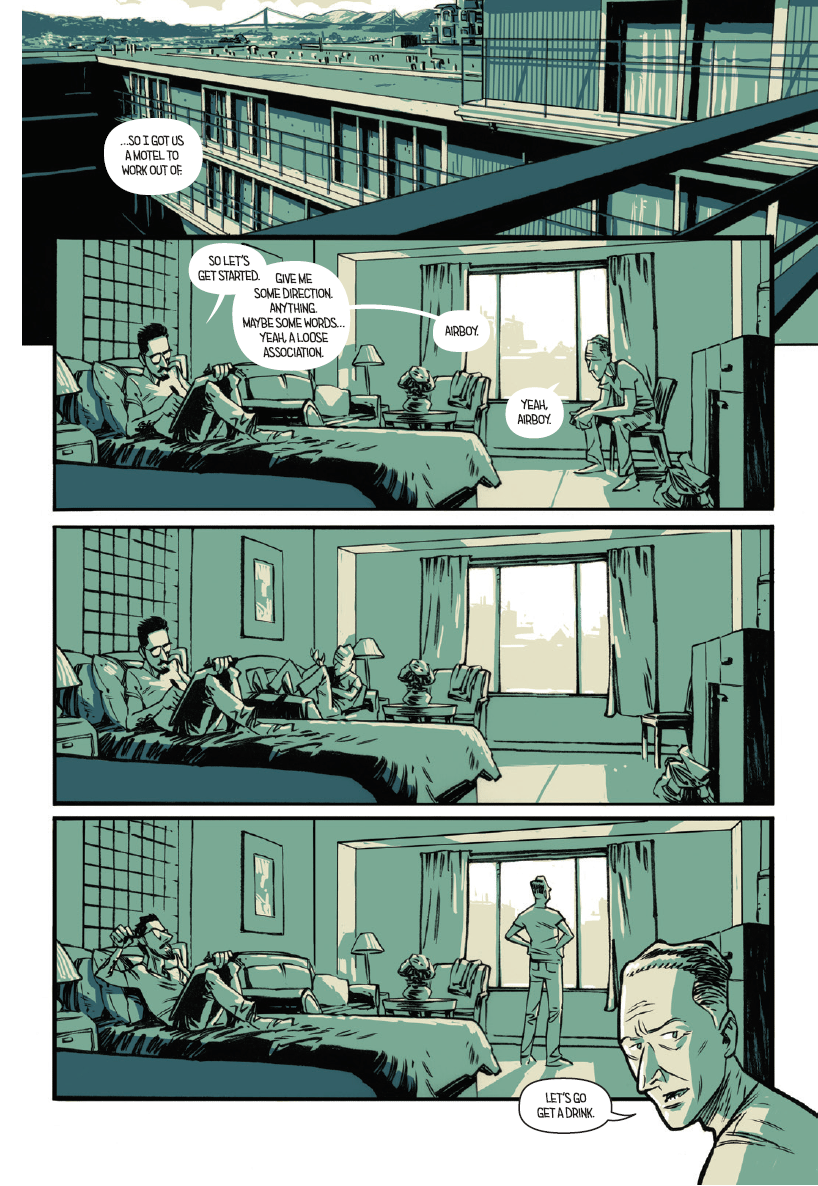 This series, now collected as a Hardcover with back matter by Hinkle, is one of the most shockingly honest and emotionally brutal stories I have read. It is also side-splittingly hilarious. Robinson writes cruelly and honestly, depicting himself as a hack, someone past their prime, readily eager to use drugs to run away from his (many) problems. He is a droll, heart on sleeve a-hole. And Hinkle is cut from a similar cloth. Robinson drinks, he cheats on his wife and he has some pretty harsh feedback for the comics community, especially DC Comics. He is at a loss in life and instead of seeing AIRBOY as an opportunity, it’s just another obstacle he has to overcome.

READ: Missed out on what the AIRBOY #2 controversy was? Find out about it here!

Robinson’s dialogue is cutting, leaving any civility at the door (though dialogue from issue 2 has been changed due to some controversy over Robinson’s references to the transgender community). He has no real regard for himself or his craft and his relationship with Hinkle is drug fuelled and strained. With the introduction of Airboy, it becomes a battle between colourful optimism and grey pessimism. Airboy can see hope in a war torn world, while Robinson sees nothing but despair in the free world. It becomes a fascinating clash of ideals that forces Robinson to face his demons. Not that Hinkle has nothing to do throughout the series. Both he and Robinson manage to get each other into a lot of scrapes and, for a guy who loves his wife, has sex with two women. They berate and encourage each other, building each other up and cutting each other down. It’s a riveting piece of character analysis wrapped up in a WWII adventure. 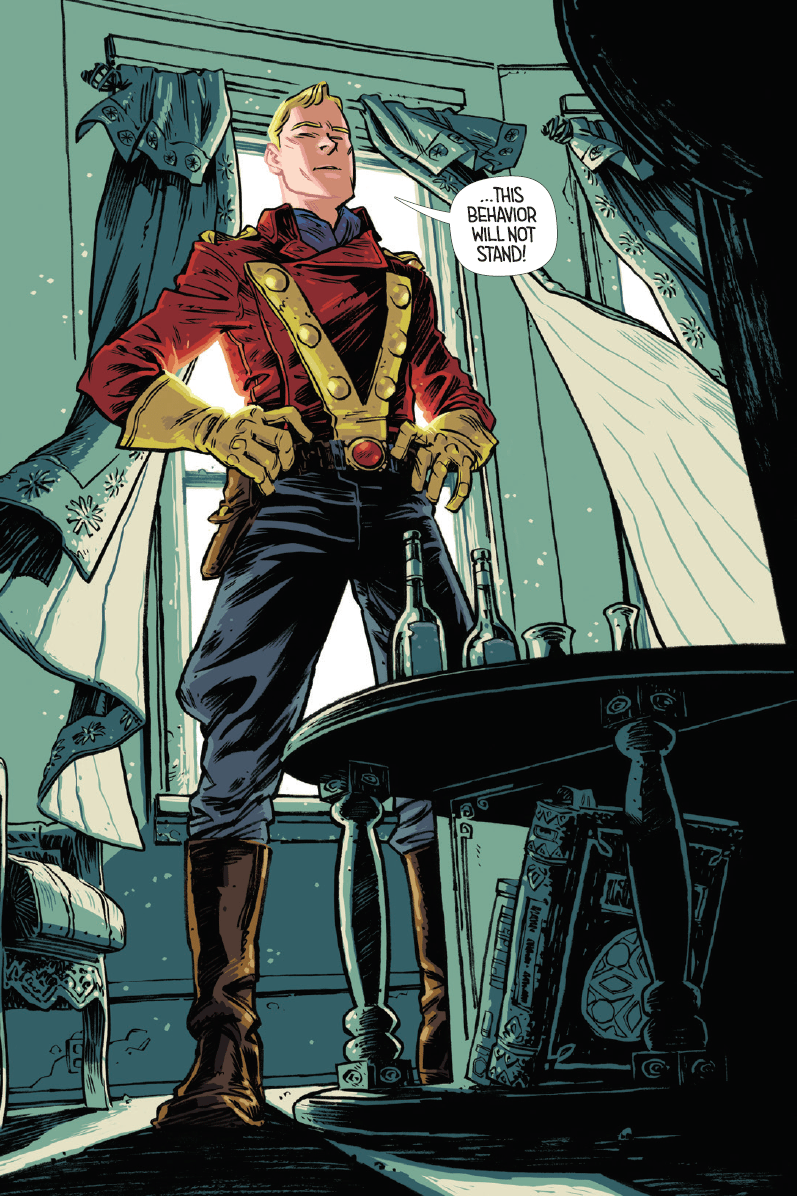 With Robinson’s detailed script (the backmatter gives an example of his panel by panel breakdowns), Greg Hinkle had quite a challenge to breathe life into such a project. But breathe he did, creating a ‘real’ world rendered in muted colors, a greyish blue existence which reflects the views of the main characters. His character renditions of himself and Robinson border on caricature, accentuating their facial features (and other parts of their anatomy) without it feeling cartoony. His layouts, spreads and montages help tell a story that never takes a break, shocking and making us laugh in equal measure. The move of introducing Airboy in full color is both clever and inspired, a shining light in a grey world. This idea is taken even further when our ‘heroes’ are transported to a battle in WWII. They remain in grey tones while the world they’ve stepped into is full of explosive color.

READ: Looking for a new Image series to read? Check out our review of THE FIX #1 and #2!

AIRBOY is an experience. Something that at times beggars belief, yet feels honest. It’s exciting and fun. It’s ballsy and out there. It is also tinged with sadness. Robinson and Hinkle create a book that does not paint them in a good light. But which parts are true and which parts are make believe? Is Airboy real or a drug induced hallucination? With a superb script and fantastic art, it’s a great read (just don’t read it in public, there is a lot of elongated genitalia on show!)