AIRBOY #3 by writer James Robinson and artist Greg Hinkle is a one-of-a-kind comic. The mini-series stars the two creators as they stumble through a drug-fueled binge in an effort to find a way to reboot the public domain property Airboy for Image Comics. In one of the most meta and honest stories that I’ve ever read, the creative team is transported to Airboy’s home dimension of a science-fiction styled World War II Germany. In short, the creators of the book send themselves as characters in said book to a dimension where they are interacting with characters from a book that they are supposed to be writing in this book and in real life. If that sounds confusing, it really isn’t. In fact, AIRBOY is an amazingly honest depiction of both creators personal lives and troubles. 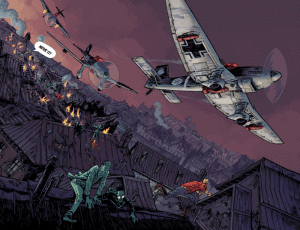 James Robinson, most notably known for his work on DC Comics’ STARMAN and THE SHADE, delivers a gut-wrenching script for this issue. This mini-series has always really been about Robinson reflecting on himself and all the mistakes he’s made in his life, but this issue feels like we are spying on a therapy session. Robinson does not portray himself in the best light. He’s brash, obnoxious, selfish, and self-loathing. But at the same time, Robinson writing himself is one of the most emotional reads that I’ve experienced through this medium. In a scene where Robinson is talking with Airboy after seeing the corpse of the WWII version of himself, Robinson pours himself upon the page shedding light on his real world struggles with his ex-wife and how he even feels about himself. It’s an extremely powerful sequence and is as honest as anything I’ve read in recent memory. Robinson has always been one of those writers that I’ve adored for years, who never really made it as a big household name in the industry that he could have been. But with AIRBOY, I feel like that’s going to change.

Who the hell is Greg Hinkle and why hasn’t he been drawing every single comic since I’ve been reading? While I feel that AIRBOY is a showcase for the tremendous writing prowess of James Robinson, this mini-series puts Greg Hinkle on the map. While the majority of the series so far has been realistic in reserved, showing Hinkle’s amazing knack for human expression and…anatomy, Hinkle drops a bomb on this issue and shows that he can nail action sequences just as well as he can nail the humanistic side of things. WWII fighter planes whizz across the page that lend a real sense of danger that our very real main characters are in. The detail in some of the more bombastic war scenes is insane. Hinkle’s choice to keep him and James Robinson’s characters in the same greenish blue hues that we saw in the “real world” issues contrasts amazingly well with the colorful look of the comic book styled Airboy dimension. He might’ve been an unknown artist to me before AIRBOY, but I’ll be sure to follow Greg Hinkle on whatever he decides to do next. 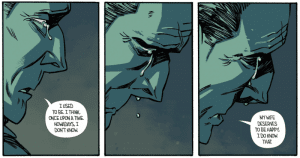 AIRBOY is special. This comic is something that I have never read, and probably will never read anything like it. Through its clever use of throwing real-world people with real-world issues into a world full of Nazi-mech suits and soldiers named Skywolf and the Flying Dutchman, AIRBOY manages to become one of the most heartfelt and realistic stories known to date.