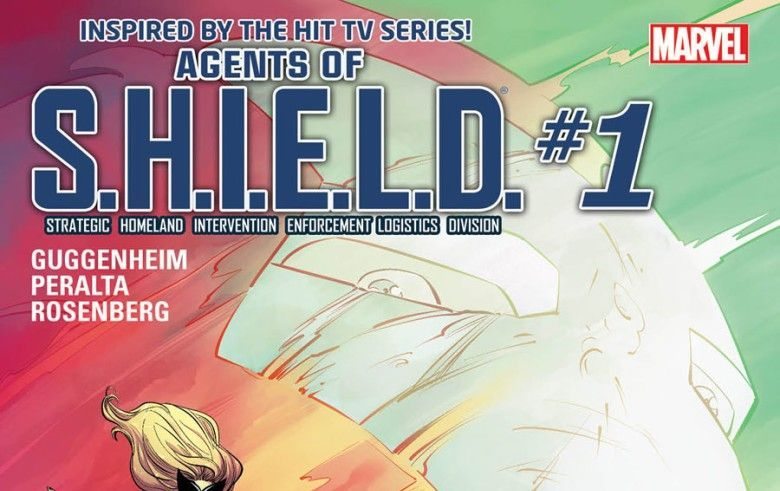 Just over a year ago, Mark Waid wrote S.H.I.E.L.D., the first in-continuity comic series featuring the characters from the TV series as they teamed up with various Marvel heroes each issue. These were one-off issues, with a slight story arc running throughout, until the series ended with issue 12. It was fun and light and felt fully entrenched in the Marvel Universe.

Taking up the baton from Waid is Marc Guggenheim, who decides to take a more traditional comics storytelling approach to this series. He writes a first issue that assumes you know who the characters are. They all get little scenes that set up their own story, but the book never moves too far away from what this issue is about: Someone has used Iron Man tech to break into the Pentagon and they’ve stolen something that could mean danger for all of Marvel’s heroes. The dialogue is crisp and fast, you can hear the characters’ voices loud and clear. 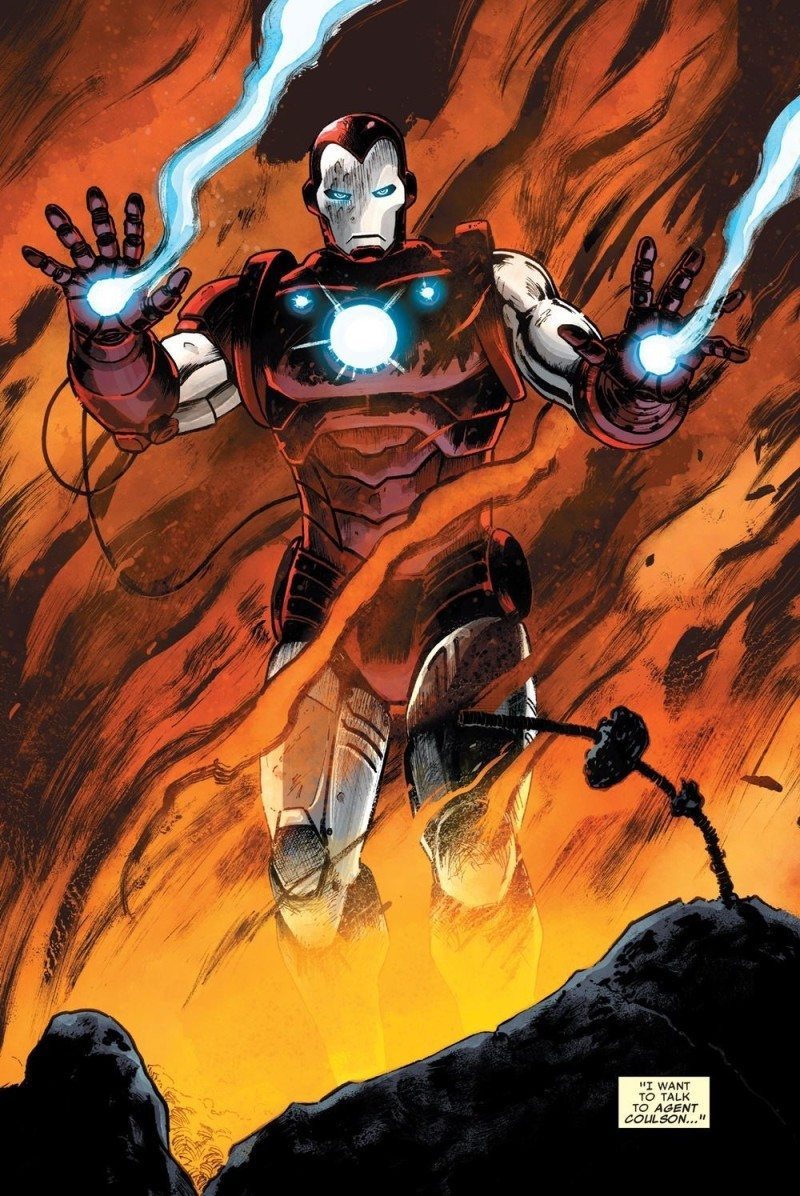 READ: Tony Stark has his hands full in our review of INVINCIBLE IRON MAN #5!

The whole production of this comic feels more aimed at fans of the show than the previous series. It does have guest appearances by mainstays of the Marvel U, but this concentrates mostly on the agents. This is not a team-up book. This is an AGENTS OF S.H.I.E.L.D book. This seems like it bridges the gap between the Marvel Cinematic Universe and the Marvel Universe without feeling forced, with some nice playful moments that echo scenes from the first Avengers film. Of course, there are a few deviations from the source material, and Agent Fitz seems like he has really manned up. Then again, there may be something else at play there that might materialize somewhere along the way.

READ: Agent of S.H.I.E.L.D. Bobbi Morse, a.k.a. Mockingbird, has her own new series. Check out our preview of MOCKINGBIRD #1 here!

Apologies to Mike Norton (whose art on REVIVAL is stellar) and FCO Plascencia (colorist extraordinaire whose BATMAN work is as important as that of Snyder, Capullo, and Miki), but this issue’s cover does nothing for me. Indeed, based on that alone, I almost didn’t pick it up. It seemed a bit plain and didn’t grab my attention. Fortunately, I decided to have a look inside and liked what I saw. We open on a P.O.V. page of someone crashing into the Pentagon before revealing a splash page of someone wearing a classic Iron Man suit. 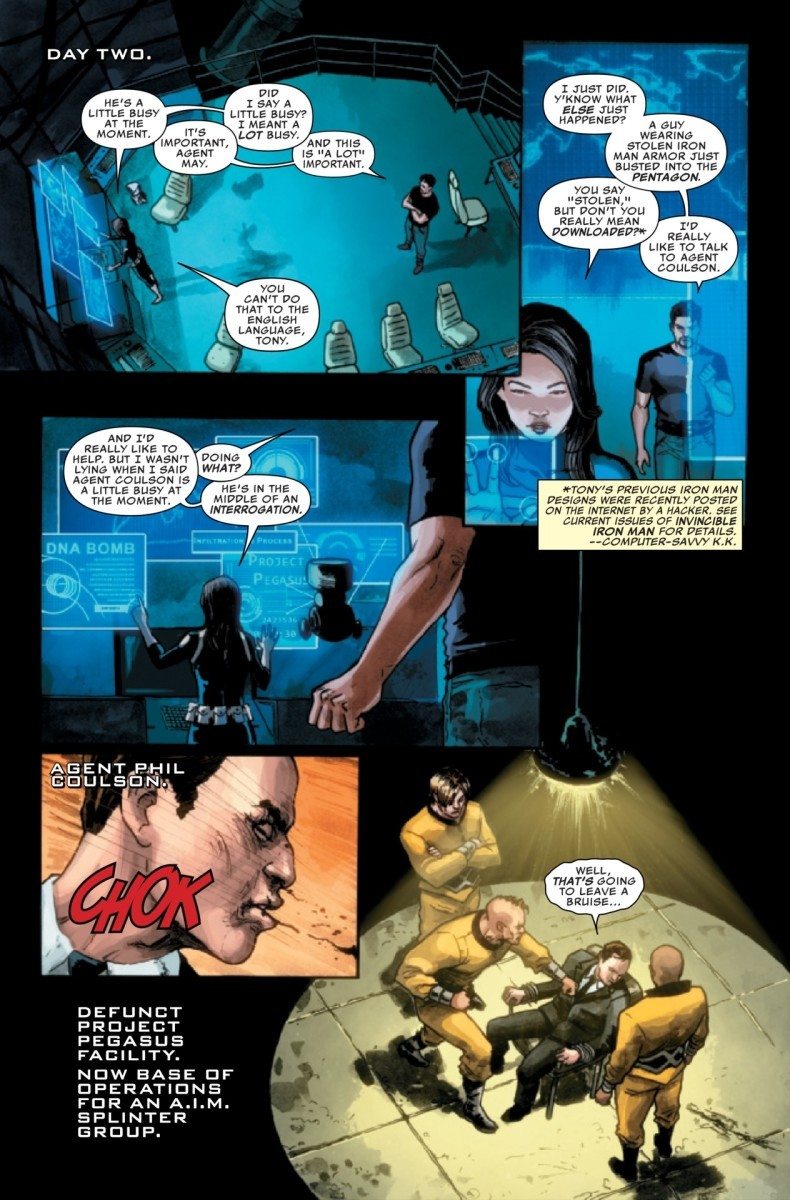 The visuals have an immediacy about them that means each panel shows exactly what needs to be shown, that this artist is sure of what he’s doing. And it sure is enjoyable to look at. Germán Peralta takes Guggenheim’s script and makes it zip when it needs to. The characters are reminesent of the show without being of exact likeness. There is a slight bit of action at the start, but most of the comic focuses on interactions between all the key players, and it bristles with energy and fun. Rachelle Rosenberg’s colors really add to Peralta’s line work, and her use of watercolors for backgrounds and shadows adds character to the art.

As first issues go, this was a good starting point, with enough ideas and plot developments to keep the series going for quite a while. The twist at the end is intriguing yet makes sense, and it will be interesting to see how its ramifications shape the lives of the Agents of S.H.I.E.L.D.