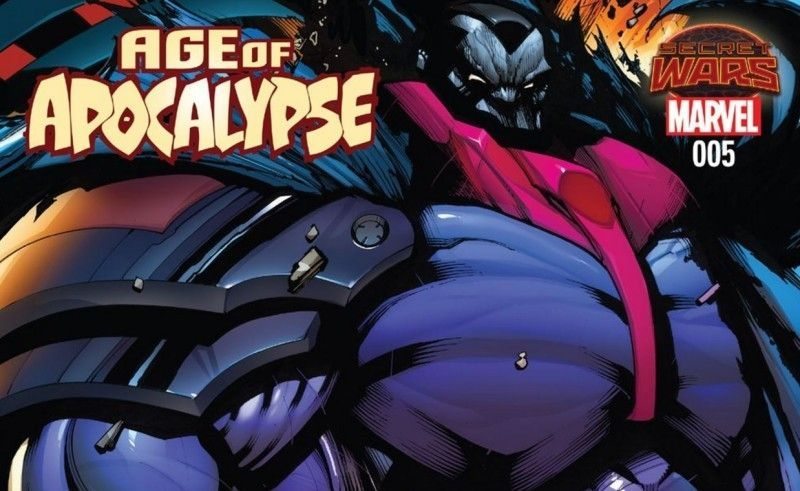 Marvel released AGE OF APOCALYPSE #5 this week. After the death of both Magneto and En Sabah Nur, how will the remaining X-Men manage to cure themselves of the legacy virus and stop the dangerous Dr. Nemesis?

AGE OF APOCALYPSE #5 by Fabian Nicieza and Iban Coello!

In AGE OF APOCALYPSE #5, the Legacy Virus has been unleashed. There have already been high-level casualties like Magneto and En Sabah Nur! However, the war is not over. All of the mutants still remain infected with the legacy virus and struggle to find a cure.

After the sudden death of Dark Beast, mutantkinds’ fate lies on the shoulders of Emma Frost. Ironically, Emma’s  last hope might be Jean Grey.

Meanwhile, Dr. Nemesis might be an even bigger threat than his former monarch Apocalypse. He gains access to the powers of hundreds of mutants and plans on assassinating God Doom himself in order to prove that he’s without any doubt the fittest there is…

Something fans have noticed over the course of the entire series has been that there are little changes to the Age of Apocalypse canon that make the world seem more similar to the regular X-Men continuity. And thus far, it hasn’t been bothering me that much, yet. But in this issue, I think it becomes very apparent that this is a very 616-esque Age of Apocalypse.

AGE OF APOCALYPSE #5: Is That You, Emma Frost?

Not only do we have Emma Frost as a member of the X-Men and Sabretooth as one of their enemies as well as the romance between Rogue and Gambit (in his 616 costume), Logan still has Wolverine as his nickname, and his rivalry with Summers has been explored in the previous issue. Finally, the fact that Cyclops and Jean Grey seem to share a past and end up back together in this issue (in her 616 Phoenix costume, notably!) makes it completely obvious that the Age of Apocalypse in AGE OF APOCALYPSE #5 sacrificed many parts of its own identity in order to seem more familiar to readers.

Fan-favorite AoA characters such as Sabretooth, Blink, and Rogue are barely explored during the story, some of them next to completely irrelevant. And yet, in the end, this series overall should have succeeded at causing some serious nostalgia for the fans having read the story when it originally came out in the 90’s. Which is especially due to the two artists having worked on the tie-in. Iban Coello definitely doesn’t have to hide behind his predecessor and hits exactly the right tone with his very kinetic, dynamic style that makes the book – regardless of its story – just fun to look at.

I, personally, am not sure about the inclusion of the character of Cypher, who, at first, seemed like a MacGuffin plot device somewhat similar to Marvel Studios’ Infinity Stones. But, as the story progressed, he became less and less important to the plot itself, becoming more of an identification figure for the reader to explore the world through. In this issue, he finally becomes a narrator of sorts. Kind of a substitute for the explanatory boxes comics used to have. Which, again, sort of takes the reader back to the 90’s, in a way. All thing considered, though, I don’t feel like the creators had a good plan on what to do with the character, which is why his position as the book’s main protagonist doesn’t seem justified.

AGE OF APOCALYPSE #5: Characters Out of Character?

It felt like that with several characters. Emma Frost, for instance, acts really off-character just a few moments after the death of her husband. Other characters that appeared in the book a lot didn’t seem to have any character arc whatsoever, at all. Though I will grant that Nicieza did a great job with the character of Scott Summers. And, overall, this issue does work as a more or less satisfying end to the limited series.

LISTEN: Want more X-Men: Age of Apocalypse? We examine the original run in this podcast!

The reveal about Burner’s relation to Havok and Cyclops is surprising and well-timed, and the fact that the X-Gene has been removed from all the mutants makes the end hopeful, in a way: man and mutant are finally equal in this world, and the people have another shot at choosing between love and hate, war and peace. On the other hand, the appearance of Phoenix as a deus ex machina to solve the situation seems a little too convenient – and it’s not very original or innovative, either.

All in all, AGE OF APOCALYPSE #5 is a solid concluding issue. It has good art with few flaws when it comes to characterization in addition to plot here and there. All in all, it does not disappoint. This is a book with a good story overall. It will grind the gears of Age of Apocalypse fans for several reasons. Overall, it will heavily remind them of what they loved about the 1990’s crossover.