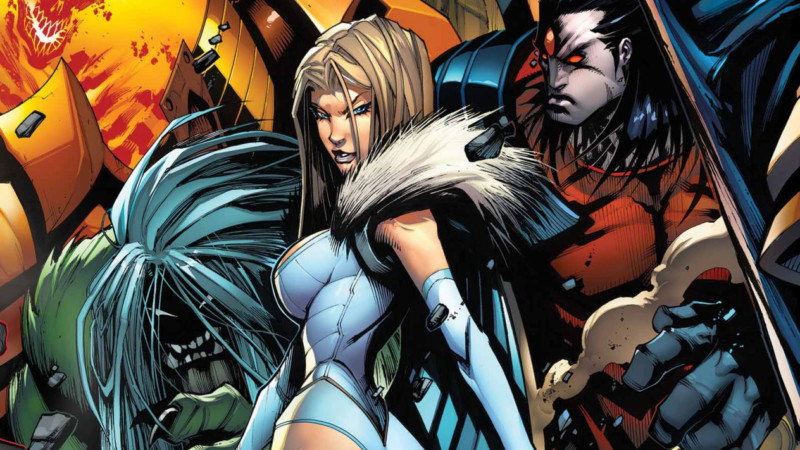 In AGE OF APOCALYPSE #4, mass casualties occur as Apocalypse releases the legacy virus on all remaining mutants. Who will die? Who will still be standing after the X-Men’s biggest fight yet against En Sabah Nur?

AGE OF APOCALYPSE #4 by Fabian Nicieza and Iban Coello

The legacy virus has been released by En Sabah Nur to make sure only the fittest of mutants survive. While Wolverine, Scott, and Burner investigate in the Gene Labs of Dark Beast, the remaining mutants have to combine their powers to get a chance to take Apocalypse down finally. Not all of them are going to survive!

HOUSE OF M is not the only X-related Secret Wars tie-in to get a different artist in the middle of the book since in AGE OF APOCALYPSE #4, Iban Coello takes over the series from Gerardo Sandoval. In this case, it luckily barely makes a difference since Coellos’ art resembles Gerardos’ in terms of how 90’s-esque it comes off. His art appears dynamic and kinetic with similar body proportions. Though I do prefer Sandoval’s art, Coello’s work on this book is great to look at.

All Eyes on Magneto in AGE OF APOCALYPSE #4

In addition, Emma role in the book finally makes sense. The Summers brothers finally see each other again. Now, they have to work together yet again. I’m curious to see how their conflicts will play out in the finale of the series.

Other characters, such as fan favorites like Blink and Rogue, barely got any spotlight or characterization. This is true not only for this issue but in the entire book.

Additionally, Cypher’s role in the story remains unclear. It’s weird that the character meant for readers to identify with barely has an opportunity to showcase himself apart from a few speeches.

AGE OF APOCALYPSE #4: The Final Showdown

The fight against Apocalypse was incredibly thrilling. I can’t say many bad things about it. However, it was a bit too short.

Defeating the powerful despot didn’t seem as hard as it probably should have. That makes Apocalypse feel a lot less menacing. Still, when Apocalypse finally falls, it feels so satisfying to the reader. There are a lot of emotional moments at the end of the issue that are incredibly touching.

AGE OF APOCALYPSE #4 reads exactly how a penultimate issue should read. It’s thrilling, emotional, and worth a read.

The new artist on the title delivers fitting visuals in the same way his predecessor did.