ADVENTURE TIME COMICS is a fun and brilliant collection of stories from The Land of Ooo. The series continues to entertain readers and fans of the show alike. With tales by some of today’s most algebraic creators from throughout the industry, the most current issue, ADVENTURE TIME COMICS #4, is divided into four colorful tales. Missing out on this issue would be unacceptable! 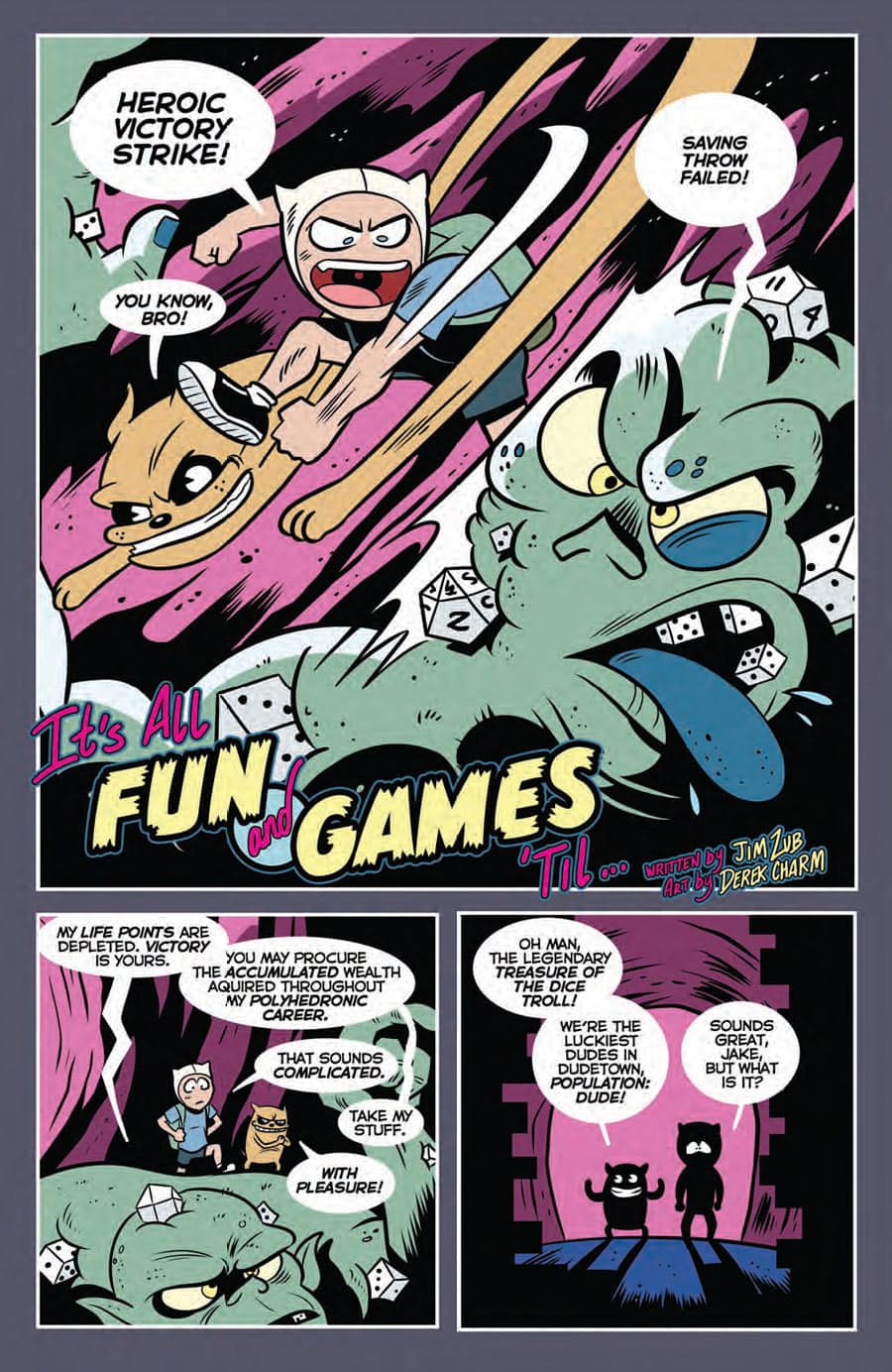 The first story opens on Finn and Jake battling a well-spoken dice monster to score a sweet treasure trove of retro board games. As the bros get ready to have the game night of their lives, Finn’s excitement causes the games to collide and become one! What really made this story wholly enjoyable is the exciting mix of writing by the skilled Jim Zub (GLITTER BOMB, SAMURAI JACK) and the electrically charged artwork of Derek Charm (JUGHEAD). This feels like a chapter right out of an exciting Shonen manga. The other reason I love it is because out of all the characters he could play as, Jake chose the Midwife, very respectable. 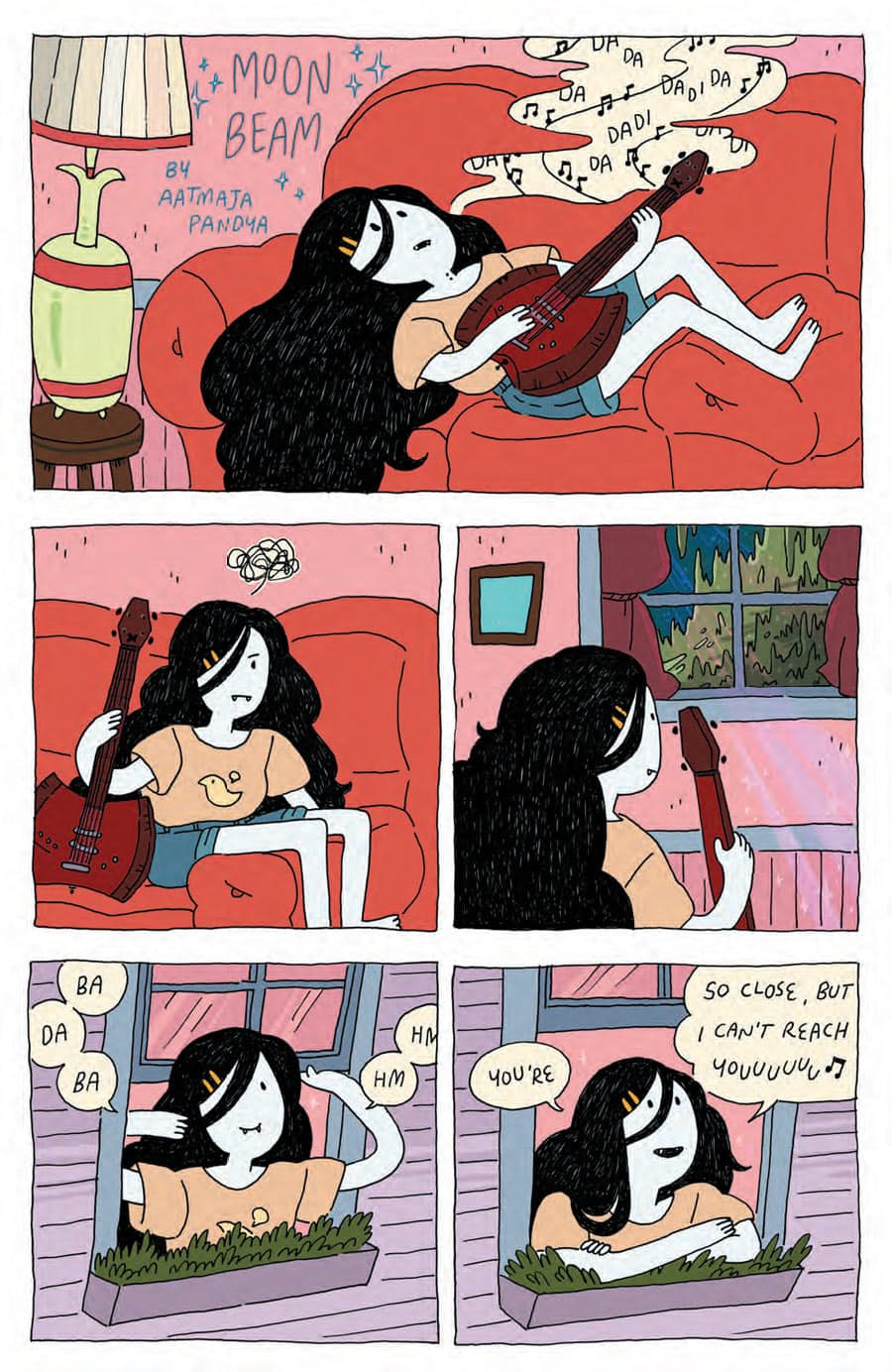 The next tale of this comic lets us chill for a spill with the Vampire Queen Marceline. She is taking the night to work on her latest song. We get a small peek at how the thousand-year-old Rockstar can find inspiration in this ever changing Land of Ooo. This story is truly a slice of life with the enchanting artwork to go with it. Marceline is one of the most popular characters in the series for multiple reasons, but it is her wisdom to see beauty in the world that is really captured here and crafted by the talented Aatmaja Panda (THE OTHER SIDE). 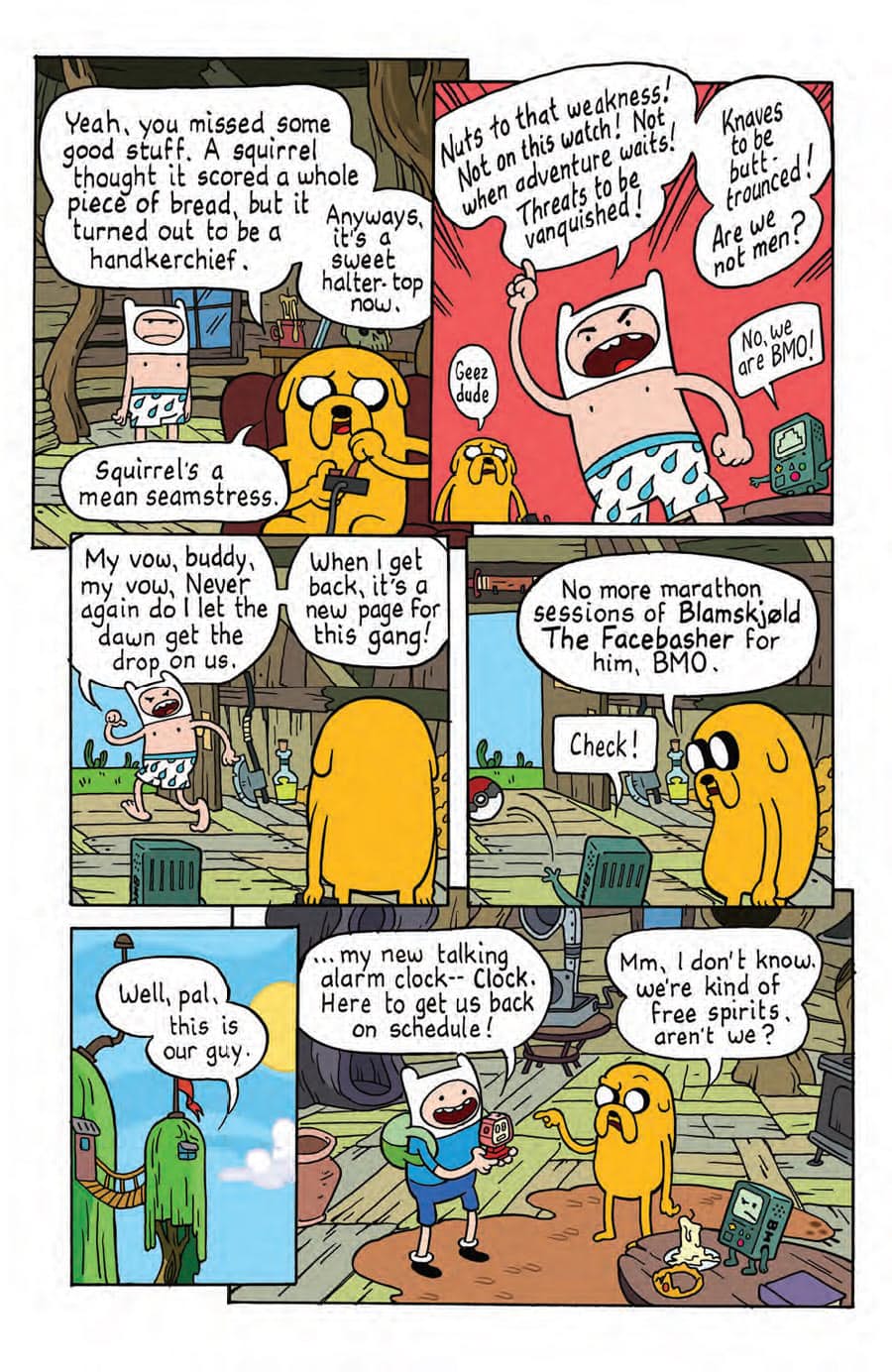 During part 3 of this mathematical issue, in order to never miss out on a full day of adventuring again, Finn makes it his mission to search the marketplaces of Ooo for the perfect alarm clock. Little does he know he’s bought more than he bargained for. This story written by comic book veteran James Lloyd (SIMPSONS COMICS) really made it feel like I was watching a classic episode of the beloved series. The segment felt like a throwback to the first season of the series when the world was a little bit simpler, and no one was the reincarnation of a comet. Accompanied by Maarta Laiho’s (LUMBERJANES) art style with its whimsical and classic cartoon charm, this is a must read.

Jake the Dog has this relaxed, free-spirited vibe to him that always makes him one of the most fun characters to read about, and Nicole Andelfinger (MUNCHKIN) seems to capture his essence better than most in this issue’s final story. It’s not a heroic journey or a dangerous mission, just Jake helping a friend see the world she never thought she would, which is vibrantly yet tenderly drawn by Anissa Espinosa (BEE & PUPPYCAT). Overall, this is a great issue because it reminds us that no matter what incarnation it takes on at its core ADVENTURE TIME is about friendship.

When it comes to comics based on a TV series I enjoy, I can be very critical, but this issue was clearly done by a group of talented creators that truly understand ADVENTURE TIME. Grab a copy from your local comic shop today before a door lord beats you to it!