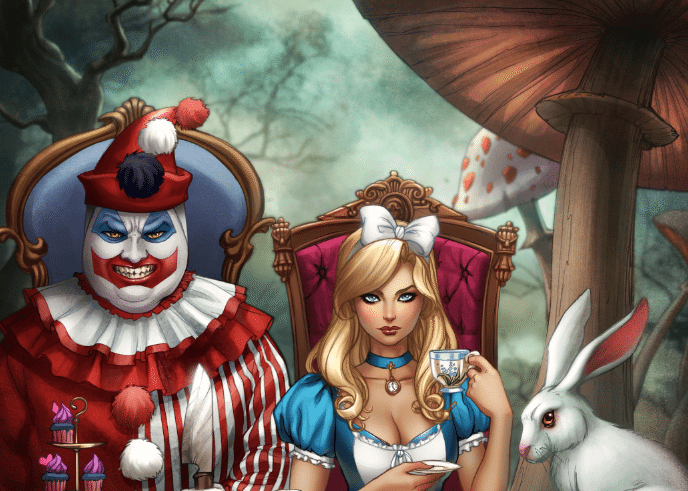 In the world of Zenescope, Wonderland is a dark, twisted place – and the ALICE IN WONDERLAND ONE-SHOT, a celebration of their success, is an effective introduction to Zenescope’s deadly world.

Written by Donald Joh, with Gregbo Watson and Erick Arciniega as artist and colorist, this one-shot steps back to before Zenescope’s version of Wonderland began.  We’re taken back to March 1952, as a terrified child fears the “two boogeymen” who come out of the closet – which, we soon learn, is in fact a portal to Wonderland.  So begins a dark and dangerous journey, as madness grips an already-damaged child, and soon the ‘star’ of the story has become a murderer.

And here’s the twist: students of history will soon begin to feel that elements of the story are disturbingly familiar.  Even for a United Kingdom resident, something felt uncomfortable, and a quick Google-check confirmed just why.  I’m not going to spoil it for anyone, but let’s just say that this is fantasy at its best, where the eerie world of Wonderland is interwoven with real history.  Adding to this overall impression, the art verges on the knife-edge of ‘disturbing’, just as it should in this dangerous world.  I wholeheartedly approve.

This is everything you can expect from a Zenescope book; eerie, a tad gruesome, with art at a high standard (although there are a couple of off-notes with Alice Liddle’s facial expressions, in my view), and with the horror that comes from the everyday being disrupted by true evil.  If you’re considering getting into Zenescope’s comics, this makes an excellent introduction.