From Occupy Wall Street to Black Lives Matter to the recent demonstrations and marches spurred by President Trump and his controversial executive orders, it seems that nowadays someone is always protesting something. Regardless of how you feel about these causes, protests have long been a regular part of our political landscape. The basics of a protest have remained constant and pretty simple: show up, hold a sign, and make some noise. However, when it comes to activism, we still have a lot to learn about organizing as effectively as possible.

JONESY #10 presents an example of civil disobedience at its best. Created by Sam Humphries and Caitlin Rose Boyle, JONESY follows a teenage girl who has the power to make anyone fall in love with anything. In JONESY #9, Jonesy breaks away from her usual teen antics to visit her mom in the city. She’s excited to occupy her time as a volunteer at the Ferret Rescue Center, but she discovers that, unfortunately, it has been shut down due to budget cuts. Instead of accepting this, Jonesy decides to do something about it. JONESY #10 follows Jonesy’s efforts to fight the closing of the Ferret Rescue Center. It begins with her and her new friends picketing outside the building and posting to social media about the protests. Eventually their movement grows and they successfully restore funding to the center.

Whether you are a seasoned protester or a newbie, you should always seek to maximize the impact of your actions by improving your methods. The following is a list of five takeaways from JONESY #10 that all activists should keep in mind and apply to their work, regardless of their political affiliations. 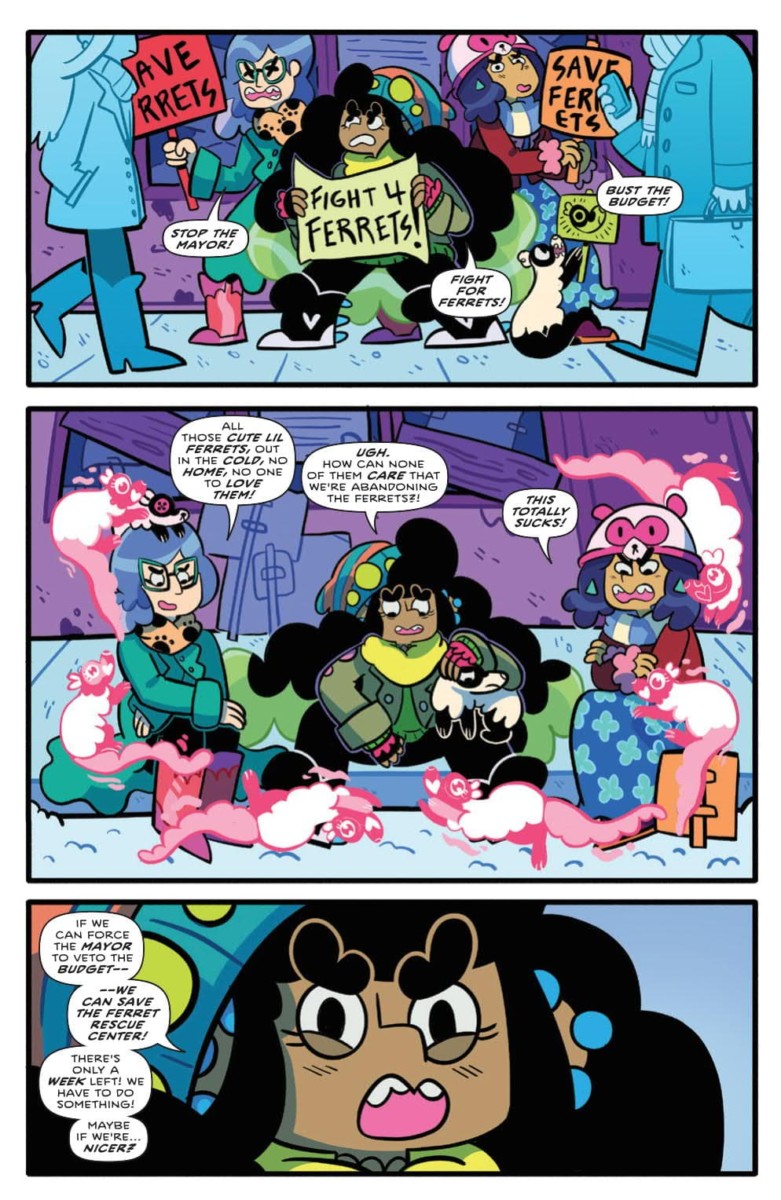 1. If a cause matters to you, it matters.

After discovering the Ferret Rescue Center has been closed, the easiest course of action for Jonesy would have been to just forget about the whole thing. After all, from Jonesy’s perspective, it didn’t seem like anyone else even cared the center had closed. However, Jonesy could not shake the concern she had for all of the ferrets that needed to be rescued. Because of her passion for ferrets, Jonesy decided to fight the decision to defund the center. As she began her protest, more and more people joined her cause.

Ultimately, if you see an injustice that you feel strongly about, no matter how small, insignificant, or silly, you should try do something about it. Just because no one else has spoken up doesn’t mean no one else cares. Other people might be upset but don’t realize what they can do to change the situation. It takes a lot of courage to be the first person to demand change, but you likely won’t be making these demands alone, even if you are the first to take up the cause.

READ: Never heard of JONESY? We think you definitely should be reading it!

Not to downplay Jonesy’s efforts, but her success is partially due to the relatively small size of her demands and focused scope of her efforts. As opposed to demanding a Ferret Rescue Center in every city across the country, Jonesy’s small goal of securing funding for the center in Shepard City is an attainable, short-term aim. Although national causes are exciting because of their size, it’s a lot easier for individuals voices to be heard on the local level.

National politics and marches can be galvanizing forces, but this energy needs to carry over into local politics. Not only does your vote “count” more because there are fewer people voting, but the percentage of voter turnout is typically significantly lower in local elections. For example, the 2013 New York mayoral election had a voter turnout of only 26%, while the 2012 presidential election had a 58% turnout in the same city. This gap is especially prevalent among younger voters. This general disinterest in local politics can be used to the advantage of activists. After all, your city council is sure to take notice if you and your friends show up to every one of their meetings.

READ: Still not convinced JONESY is amazing? Here’s our take on JONESY as a feminist romance!

Picketing is a key part of spreading awareness of your cause. However, picketing isn’t necessarily the most effective way to change legislation. The protesters in JONESY are successful because they call the members of their city council and are able to turn them against the ferret-hating mayor.

If picketing isn’t your style, a five-minute phone call to your representative can be just as effective in getting your point across. It’s important to remember that elected officials work for you. Although it’s unlikely that they will personally return your phone calls, there’s a good chance that your message will at least get passed along. This strategy is especially effective if said representative receives many phone calls regarding the same issue. Next time you think about venting to your Facebook friends about politics, pick up the phone instead and encourage them all to do the same. 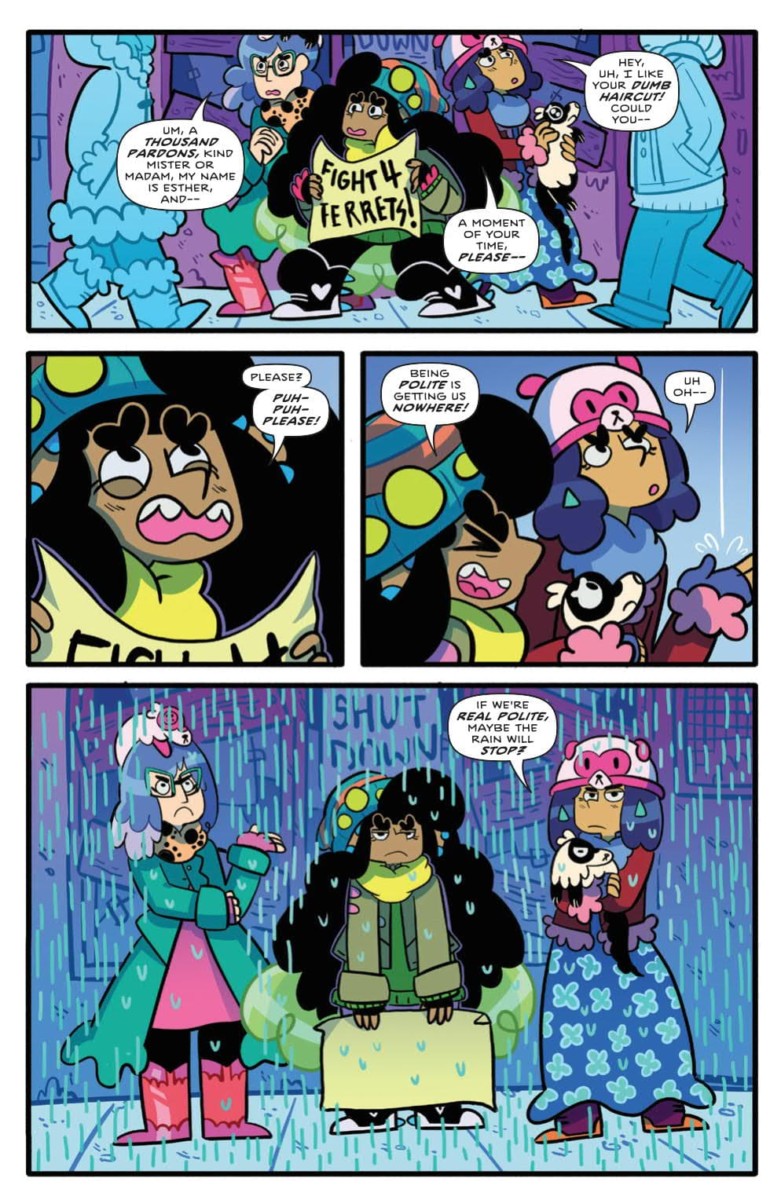 At one point, Jonesy’s mom finds her alone her room scrolling through all of the negative reactions to her protests. People on social media are calling her and her friends “crybabies,” and telling them to just “shut up.” Jonesy’s mom gives a very disheartened Jonesy this sage advice: “It isn’t your job to make them comfortable. That’s when you know you’re doing it right.”

The job of a protester is to peacefully demonstrate dissent by disrupting the status quo. Any disruption, no matter how small, is going to annoy people. Criticism can be a very helpful tool, since it allows you to consider ways you can campaign for you cause more effectively. However, if this criticism is not constructive, it’s not worth listening to, especially if it devolves into name calling. Amid this backlash, people who disagree with you may construe your cause as something it’s not. Keep in mind that any protest is going to upset people. And that’s kind of the point.

READ: We chose JONESY as one of the best new BOOM! comics of 2016! Find out what else made the list!

When funding is finally restored to the Ferret Rescue Center, the mayor is quick to claim that not only does he love ferrets, but he has always done everything to support them. By making this claim he is minimizing the perceived influence of the protesters. An outsider might believe that the protests were ineffective or that the protesters were complaining about nothing.

In a way, this goes hand in hand with the way that politicians and mass media are quick to demonize protesters. Activism is often thankless work. It can be demoralizing to work hard to solve a problem and then have the people you fought against claim there was never a problem to begin with. Remember that activism is about creating change, not “winning.” If your actions create change, even if the outcome is not exactly what you imagined, your efforts were not in vain. Don’t let yourself be discouraged.

In the turbulent political climate in which we find ourselves, JONESY’s latest issue is a timely reminder of what to expect as an activist and how to stay politically active. Find a cause that matters to you, get involved locally, and don’t be afraid to call your representatives. Don’t be discouraged by backlash or lack of recognition. Above all else, please remember to stay safe, stay peaceful, and stay determined.