The second installment of “Mild Mannered” marks the culmination of several ongoing storylines in SUPERMAN, SUPERWOMAN, and the titular ACTION COMICS. Issue #974 sees the human Clark Kent reach new levels of stalker-creepy, while Superman is preoccupied trying to save Lana Lang’s life. The result is a mix of mystery, tension, and drama, as the fabric holding these various Supermen together begins to unravel. 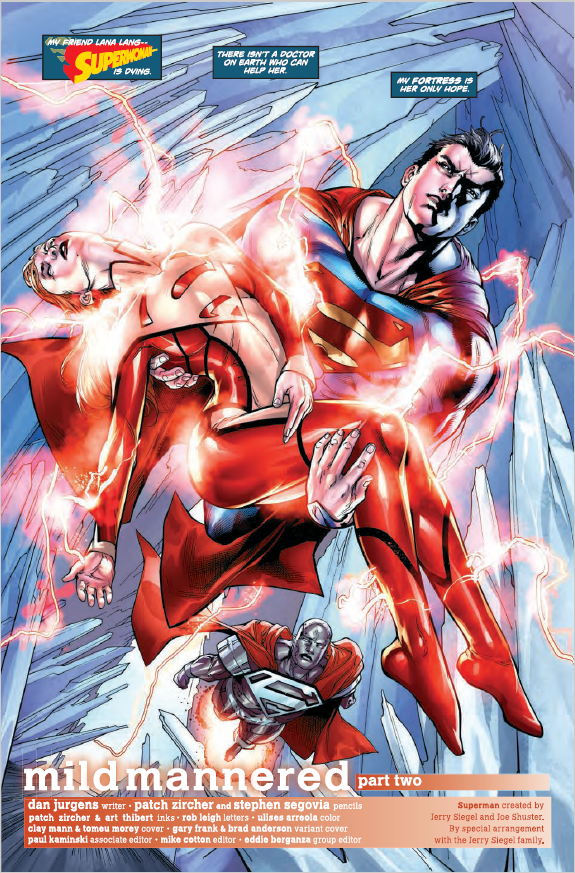 The issue begins with Superman racing at light speed to reach the Fortress of Solitude, holding a dying Lana Lang in his arms. Lana is reaching super-powered overload, on the verge of suffering the same fate as the New 52 Lois Lane, who’s power acquisition eventually killed her. The ramifications of this have been explored more fully in SUPERWOMAN, but here her ailments provide the catalyst to keep Superman busy while Lois deals with the human Clark, who’s asked her out on a date. Lois agrees to go out with him in order to find out more about his mysterious origins, but things take a turn for the super-creepy when Clark arrives with flowers, a limo, and an engagement ring. The aftershock of this event leaves the Super-family very vulnerable to the retribution of an unhinged Clark Kent.

READ: ACTION COMICS isn’t the only Superman title crammed with an excess of Supermen. Take a look at our review of SUPERMAN #16, featuring a Multiverse of Supermen!

Human Clark has been a fascinating enigma of Dan Jurgens’ current run, first established at the very beginning of the REBIRTH storyline. At first seeming like an utterly harmless aberration, he has since evolved into an oddly intense, faux-Clark, showing up wherever Lois is like an unwanted shadow. Looking back, it’s impressive how Jurgens managed to subtly progress his threat level throughout the past 20-some issues, by having him pop up more and more frequently, and slowly altering his Lois-focused dialogue from casual interest to a sheer obsession.

By now it’s clear that this Clark has been programmed or brainwashed to pursue Lois, with some kind of instinctual knowledge based on her relationship with the real Clark Kent. In this installment, he speaks of her as though they belong together and indicates that a voice in his head is guiding him. This voice could be interpreted as instinct, but I suspect it’s more literally the voice of either Ozymandias or Dr. Manhattan, who likely created the faux-Clark as part of his larger experiment with the DC Universe. Regardless of his origin, Clark’s interactions with Lois in this issue are utterly captivating, and Jurgens successfully builds up the immense anticipation to finally get to the bottom of the Clark Kent mystery. 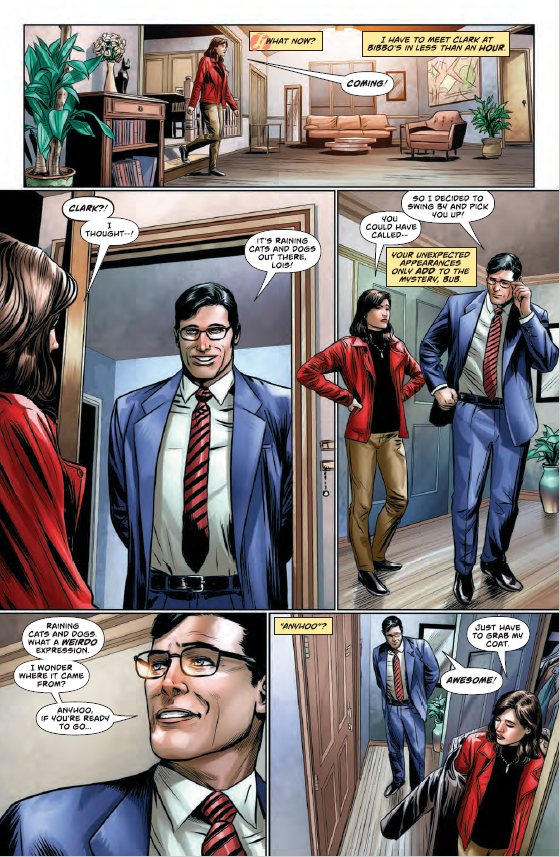 The issue’s handling of the Lana Lang situation is also quite effective, with Superman understandably fixated on curing Lana. With most of the issue’s intrigue over on the Clark Kent side, Lana’s situation provides an emotional dilemma for Superman that keeps his part of the issue charged and compelling. It’s interesting to note that this is not the same Superman Lana knew, and the two had absolutely no relationship until meeting in SUPERMAN: REBIRTH #1. Yet Superman’s affections carry over from the world he knew, just like fake-Clark’s feelings for Lois spawn from whatever world (or Dr. Manhattan gene pool) he’s from. There’s a point in which Lana briefly awakens from her power-coma, and surprised to see Superman, asks: “How can you be here, when I just saw you there?” Assuming the other Clark she saw was the fallen Superman of her world, I suspect we’re going to find out that all of these Supermen are more connected than we realized. They may, in fact, be one and the same — one original Superman split into multiple pieces by Dr. Manhattan. Perhaps the upcoming “Superman Reborn” arc will see these pieces come back together.

READ: For an in-depth look at the roles played by the various Supermen of DC REBIRTH, read our analysis, DC’s Superman: Does He Still Belong Here?

Key in bridging the Superman and Clark Kent storylines together are artists Patrick Zircher and Stephen Segovia, who have a remarkable capacity for expressive facial work. These details come in handy when distinguishing the looks of Superman and faux-Clark. Superman is enmeshed with genuine emotion over Lana; concern and empathy etched into his every feature. Clark, on the other hand, looks more like a mannequin. His smile stretches just a little too widely, and his blue eyes gleam hypnotically pleasant, as though he’s never experienced another emotion. By altering the typical Clark Kent features ever so slightly, the artists take him from lovable to eerie, from bumbling to purposeful. The sense of tension surrounding the Clark Kent scenes largely stems from Zircher and Segovia’s brilliant nuances, elevating the issue from effective to masterful.

With Jurgens’ mastery of suspense as well as Zircher and Segovia’s detailed facial work, ACTION COMICS #974 raises the Clark Kent conflict to new levels, while setting up the upcoming “Superman Reborn” story arc. The only thing keeping ACTION COMICS from achieving perfection is the tendency to elevate anticipation and suspense over creating drama within the moment, but the suspense is so well executed that Jurgens and his team can hardly be faulted for this. With every issue, they continue to entertain us with fast paced and dramatically heightened storytelling, befitting of the name ACTION COMICS.