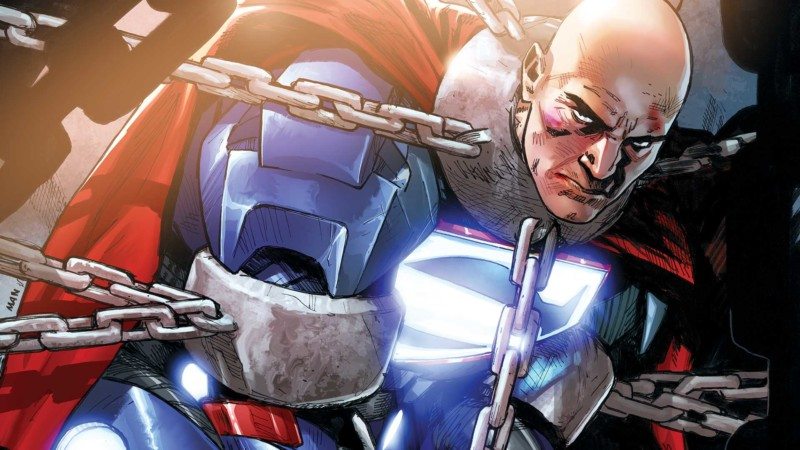 ACTION COMICS #968 picks up the thread of Superman vs. L’cal, the Godslayer, and Zade, his faithful subject. In the climactic moments of the previous issue, it was revealed that Lex Luthor was destined to to take over Darkseid’s throne on Apokolips, and his rule would lead to the deaths of millions. L’Cal and Zade had travelled to Earth to kill Luthor before this comes to pass. This fascinating revelation sets off the action in this issue, and it certainly lives up to the title “ACTION COMICS.” The issue is chock full of devastation, as Superman smashes the Doomsday-sized Zade through the rooftops of Metropolis.

READ: Superman just had an awesome team up with Batman – read about it in last week’s review of SUPERMAN #11!

Speaking of Doomsday, this emphasis on the action is something of a drawback, because it quickly starts to resemble the over-long first arc of Rebirth’s ACTION COMICS run. That arc primarily saw Superman and Doomsday beating the snot out of each other for six issues, and it got very repetitive after a while. The imagery featured in this issue is evocative of that first arc, with Zade’s striking physical similarity to Doomsday, and the emphasis on shows of brute force between Superman and his nemesis. Thankfully, Dan Jurgens’ story here is more nuanced and layered than his Doomsday run, and the segments that feature Luthor confronting L’Cal are more interesting, with L’Cal insinuating his right to kill Luthor to prevent the apocalypse, and Luthor vehemently denying it.

What’s also fascinating about this particular conflict is it tackles Superman’s questioning of Luthor’s true motives. The reader must always remember that the Superman we’re seeing is not the Superman of this world. The Lex Luthor from his world was a true maniac, whereas the current Luthor appears to be genuinely good. As the Godslayer intimates his knowledge of Luthor’s betrayal, it’s clear that Superman is almost too ready to believe it. The reader is forced to wonder whether Superman will handle this new information honestly and unbiased, or whether his experiences with the other Luthor will bleed over and affect his judgment. It’s an interesting question, presumably to be answered in a later issue.

READ: Missed out on the previous issue? The action starts here in our review of ACTION COMICS #967!

The art is a bit rough around the edges, but intentionally so. The rough-drawn figures of Superman, Luthor and L’Cal add a certain grittiness to the panels. Every punch, every explosion, is felt with seismic weight. Still, the overall roughness leaves something to be desired, especially when compared to the excellent facial details. Artist Tyler Kirkham’s anime influence is clearer than ever, with his attention to detail on the faces particularly prominent. One moment, where Superman’s son, Jon, sheds a single tear, is genuinely arresting. All the action grinds to a halt, as this one moment of pure emotion brings a visual clarity to the page, stopping both the reader and the characters in their tracks, as they cease fighting in light of the boy’s plea. Beautiful moments like this make one wish the figure and background work were just as detailed.

Overall, ACTION COMICS #968 is mostly action and set-up, but it certainly points the series in a fascinating direction. Jurgens’ run on Action Comics has mostly been a joy to read, with pulse pounding action and wonderfully realized characters helping to balance things out. On occasion the series has veered too heavily to the action side, and this issue is one such example, but it does manage to place a renewed focus on the plot towards the end. And the reader can hardly fault a comic with the word “Action” in the title for drawing out a conflict to epic proportions. But with the big brawl out of the way, we have some very intriguing questions left that the comic will need to slow down in order to answer. The question of Luthor’s fate, and how Superman will deal with it, is completely up in the air.