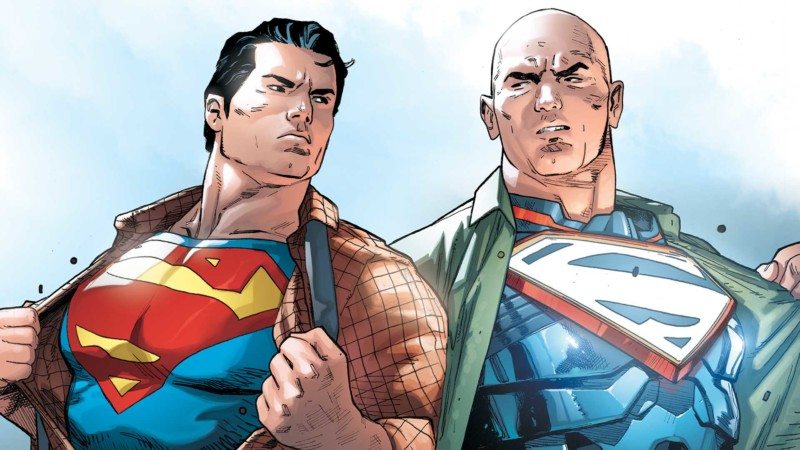 DC Rebirth’s narrative has blossomed in a variety of interesting ways. One of the most fascinating storylines has taken place in Action Comics, with the mystery of the de-powered Clark Kent, the arrival of a new Doomsday, and the conflict between the original Superman and Lex Luthor, who has taken up the mantle of the New 52’s fallen Superman. This series has truly become a conflict of Supermen, and this latest issue takes that battle to a whole new level.

Action Comics #967 opens with an apocalyptic vision of the future, with Superman’s fellow heroes in the Justice League laying slain beneath the rubble. Most tantalizing of all, a telling red cape hints that this destruction has been caused by none other than Superman. But the question is: which Superman?

This issue introduces us to two new antagonists, briefly shown in the teaser of the previous issue, calling themselves Zade and L’Cal, the “God Slayers.” They reveal to us that their ambition is to destroy Superman before he brings about the apocalypse foretold. This introduction expertly lays down the question of which Superman they are referring to, and by the end of the issue, the results will certainly be pointing in a certain direction. All this being said, however, many questions still remain unanswered.

Several touching scenes between Superman and Jon capture their wholesome father/son dynamic, with the young Jon asking his father why he decided to change his costume. As they embark on a quest to track down the bio-engineered Doomsday, Superman fills his son in on his methods, his attitude, and his hopes to carry on the fallen Superman’s tradition of protecting Metropolis from villainy. These panels are expertly juxtaposed with the Lois Lane story, which sees the venerable reporter interviewing Lex Luthor about why he decided to take up the mantle of Superman. With Luthor explaining his views on morality and justice, there is a sense of real honesty about him, which throws the reader into turmoil. Hearing both Luthor and Superman break down their agendas, they both seem to be oddly legitimate, forcing us to wonder just who the God Slayers might be targeting.

Just as these questions bubble to the surface, the action explodes as the God Slayers launch their attack in Metropolis. Both Luthor and Superman are drawn into the confrontation, with Jon, Lois and the de-powered Clark Kent being thrown into danger as well. The fight for Metropolis is expertly drawn, with no clear villains on any side.

Writer Dan Jurgens has shown himself to be incredibly adept at crafting deeply riveting characters and condensing each of their arcs into 22 pages. It’s a limited amount of space to introduce action, character, and mystery, yet Jurgens juggles them all. The central evolving plot of the many Supermen could have easily become cluttered and confusing in the hands of a less experienced writer. We’re now 10 issues into the Rebirth arc, and the mysteries have only gotten more interesting, with the suggestion of a post-apocalyptic future at the hands of one of these Supermen serving to greatly heighten the suspense.

READ: see our review of Action Comics 957, the issue that launched the REBIRTH saga!

The art, meanwhile, offers a finely-tuned complement to the narrative. Tyler Kirkham’s art is very anime-influenced, with his character drawings nicely blending in with the environments. His overall design is not as vivid and popping as some of the previous artists on this title, with his selection bearing a more muted color palette. And yet, this relative two-dimensionality paints the images in a style mirroring Silver Age comic book form – very fitting of a title that’s seeking to ‘Rebirth’ the magic of the old DC Universe. The characters’ faces are nicely tuned, with facial expressions conveying great depth, particularly in the character moments between Superman and his son, and between Lex and Lois. The action-packed battle between the two Supermen and the God Slayers is rendered clearly and colorfully, with panels packed neatly onto the page without ever feeling overstuffed.

Overall, Action Comics has been a joy to read and is one of the best titles in the Rebirth line-up. Issue 967 continues that tradition and leaves us incredibly excited for the next issue. As the question of which Superman will bring about the apocalypse is seemingly answered, we are all forced to wonder what daunting future lies in store for Metropolis, and indeed the Reborn DC Universe. Can’t wait to find out.