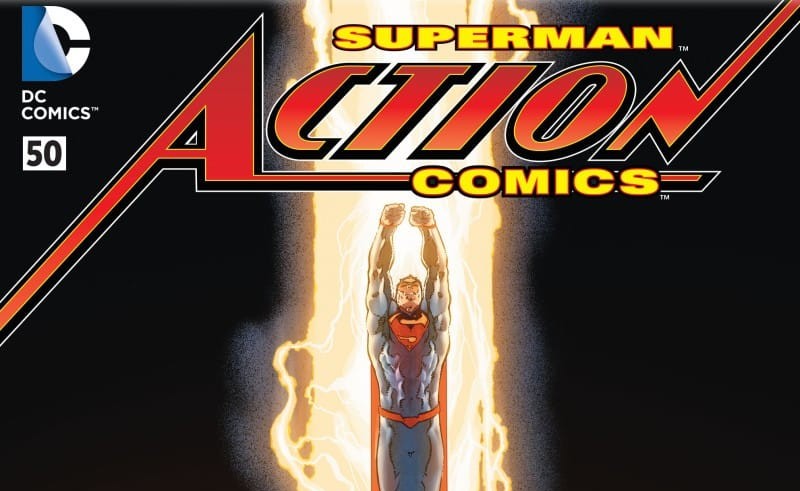 ACTION COMICS #50 has not only the honor of being the last ACTION COMICS issue for team Greg Pak and Aaron Kuder, but is also the last issue before BATMAN V SUPERMAN: DAWN OF JUSTICE is released at the end of the month. As such, the pressure is on to wrap up the ongoing story arc, so any theater-goers turned Super-fans that stumble into a comic store looking to get into comics can pick up a copy of ACTION COMICS, not be confused by entering in the middle of a story arc, and hopefully become part of the monthly readership. Thankfully, this issue does a good job of delivering a strong climax to the “TRUTH” arc that pits the Justice League (and friends) against Vandal Savage and his children (yes, I’ve read the issue, and it still sounds strange to me too).

A large chunk of the issue is most aggressively centered around Superman and the League challenging Savage as his plans are finally coming to fruition. It wouldn’t be a mad scientist/psychotic hand-rubbing villain story without the good guy cavalry storming in on the premature celebrations to unleash fresh, justice-scented Hell on our villain. 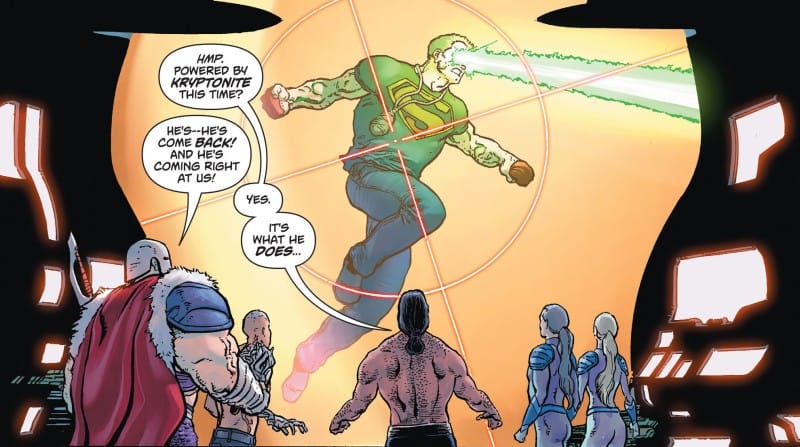 So, no, the plot of ACTION COMICS #50 is not original in the slightest, but that’s alright because, in this instance, it works and doesn’t feel too hammy or out of place. We get to see some well-paced action and great communication among the League. Oh, and SPOILER (but not really): Superman gets his powers back. He also has a running internal monologue about the greatness of life that reads more like a series of muscle-head gym platitudes than an actual thought process. So there’s that.

However, that little bit of clunky, eye-rolling script work aside, the rest of the issue holds up remarkably well. The focal point, aside from the action, is the heroism of the League. Rather than leave it to our imagination, Pak lets us see an active concern by the League (namely Wonder Woman) to save civilians in the area. It is their first priority. I don’t know if this was written to prevent new readers from calling foul on DC for its heroes not saving anyone, but whatever the reason, it is a refreshing piece of storytelling. It breaks up the wall-to-wall action and as a result creates a sense of real stakes in this fight. We know the heroes won’t die, but some civilians sure might.

WATCH: Like Greg Pak as much as we do? Listen to our interview with him!

Sometimes in comic books, the stakes of the normal folk take a back seat to the heroes’. This is something DC has been struggling with a bit since the New 52 began. We’re presented with heroes to ogle at for their divine feats and poetic struggles rather than actually witness the broader impact of their presence in the world. It’s good to see that Pak acknowledges this and includes it to give what would otherwise be a forgettable action set-piece something worth remembering. 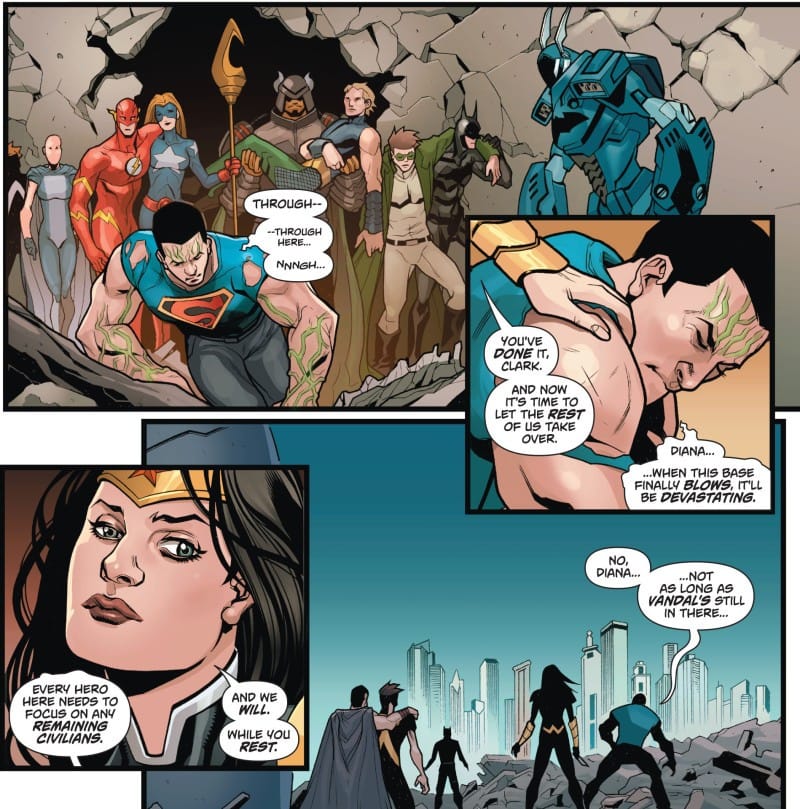 The art’s a treat to look at as well. Kuder does some really interesting work with the paneling that, again, brings a fresh new dynamic to the action going on. There’s a great balance to the full-page scene-setting panels to the smaller panels overlaid over them. It helps mirror Pak’s effort to develop a broad cinematic scope that gives necessary weight to Superman’s triumphant return to power. It’s clear that these are two artists on the same telepathic wavelength. Unfortunately, the actual return feels so corny that you may feel your eyes boring through the back of your skull, but at least it’s brief enough that it doesn’t ruin the rest of an otherwise great conclusion.

I’m not the biggest Superman fan in the world. I don’t dislike him. I’m just mostly indifferent to his character and mythology. That aside, giving this issue a chance (in isolation from previous issues), I felt like I could see glimpses of what makes Superman such a compelling character to his fans. There are moments in ACTION COMICS #50 where we see past the perfect veneer that has been shining through pop culture for nearly 78 years. 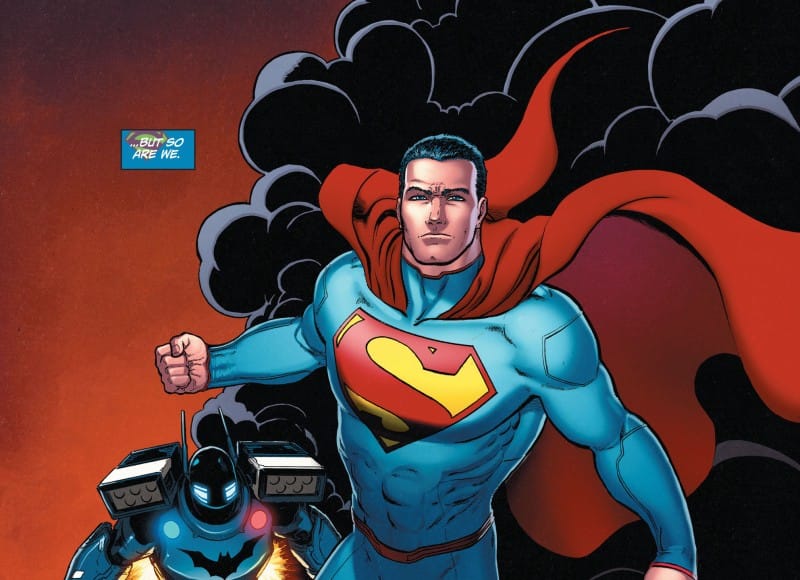 There is a struggle to Superman; it’s a burden he doesn’t project onto others. He’s complicated for the very reasons we write him off as boring. It isn’t easy to bear the hope of two planets on your chest when all you want is to be among the crowd. That outsider quality to Superman is something I picked up on in this issue of ACTION COMICS. His complete and total determination to continue saving others in the face of utter exhaustion is warmly telling about a character so often seen to be as cold and remote as the Fortress of Solitude. If he can’t be human, then you can be darned sure that protecting them will be his number 1 priority, because you protect what’s important to you. Superman values humanity to such a degree that being super means very little to him by comparison.

On the whole, ACTION COMICS #50 is a strong issue that does a great job of being the first of a multi-part, multi-book finale (the next part takes place in SUPERMAN/WONDER WOMAN). It’s a real joy to read if you can get past the few issues with dialogue, which leave no question as to why some people find Superman annoying. Fortunately, the strong elements, like the pacing, art, and overall direction largely overshadow these gripes to deliver a wholly solid book that has weight, purpose, and most importantly, creativity. What ACTION COMICS #50 does right is that, even as world is crashing down around Superman, it exposes the cracks in his steely facade and lets you in behind the man of steel.