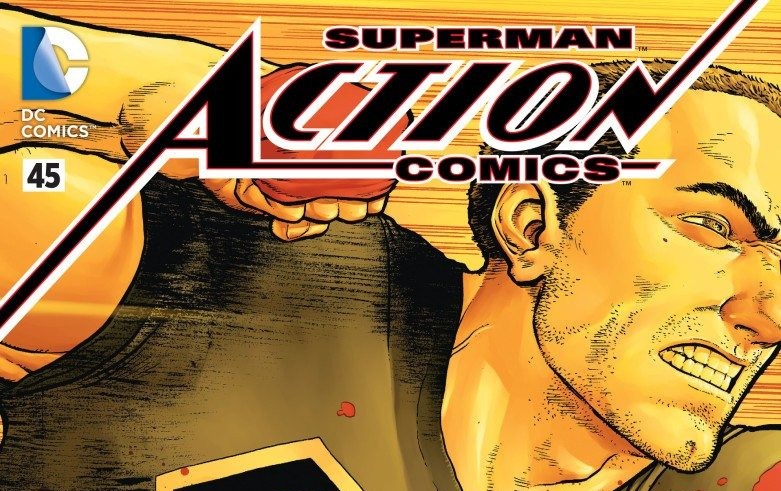 Superman’s on the run! Punching things only makes his enemy, Wrath, stronger, so he has to lie low, play smart, and play… detective.

In the wake of the big battle with Wrath and her minions, Superman flees Metropolis (again) and goes undercover. He resorts to his wit and his wisdom to search for clues and find a way to stop Wrath and save his friends. But he may not be prepared for what he finds… 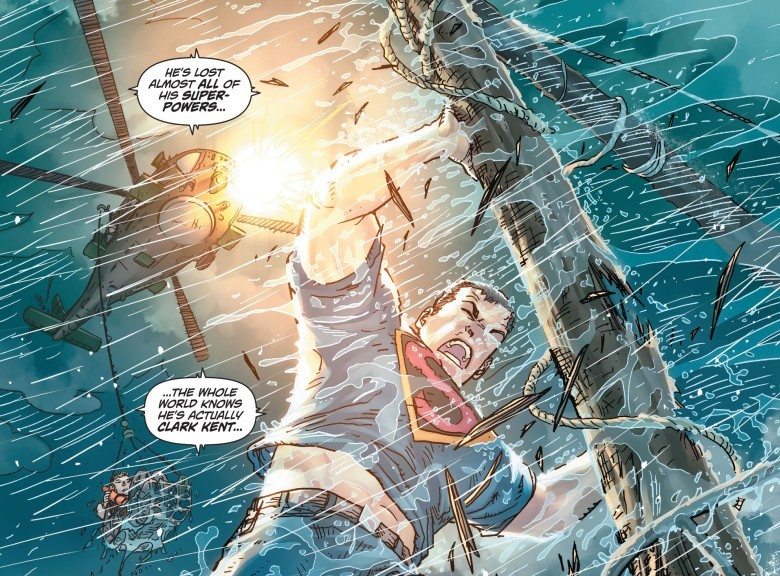 ACTION COMICS #45 makes a strong stab at exploring what the Man of Steel is capable of when he’s not so steely. There’s a hard downshift from the action-packed events of last issue, which I appreciate, but, again, this is a Superman comic, so there’s still plenty of smashing to satisfy those who must have it. There are a lot of interesting ideas at play here, though, and thankfully the issue doesn’t pay lip-service to them but rather just introduces (or re-introduces them), positioning them as things the story’s concerned with and will continue to explore. That’s promising, as a lot still happens, and there a lot of threads running, especially with this issue’s attempt to thematically unify ACTION COMICS, SUPERMAN, and BATMAN/SUPERMAN. It happens in a few brief moments, but if you’re reading those titles (like I am), it invokes what’s happening within them and lets their ideas reign rather than get bogged down in plots. Which is, of course, a good thing, because if you’ve read my reviews of SUPERMAN, or have read BATMAN/SUPERMAN, you know there’s not much there to get excited about. 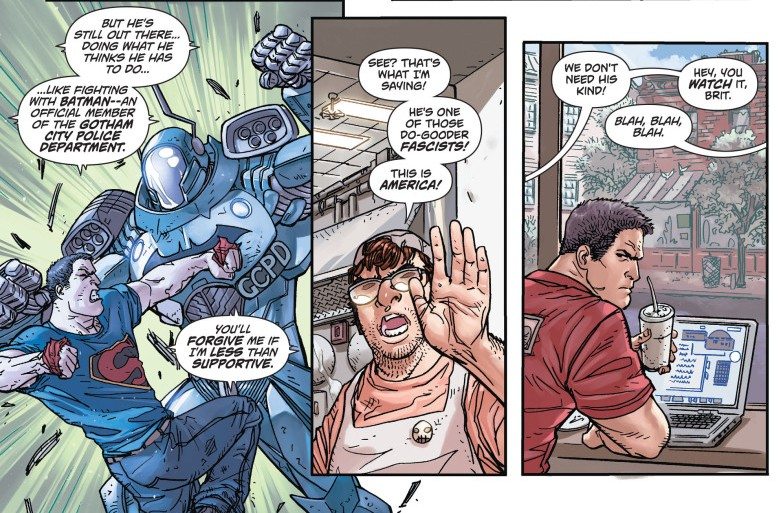 READ: CHECK OUT THE REST OF OUR ACTION COMICS COVERAGE!

Superman has essentially become Batman, and that’s no truer than in this issue. There is a common thread in a lot of Superman stories that, beyond the wide-range of alien abilities, Superman’s also smart, clever, and crafty, so that’s on display here. Where Superman got the money for all the tech he uses to not only create but willingly destroy his own Batcave is a mystery to me, but he’s employing all the tricks we’ve seen the Dark Knight use to get to the bottom of something. 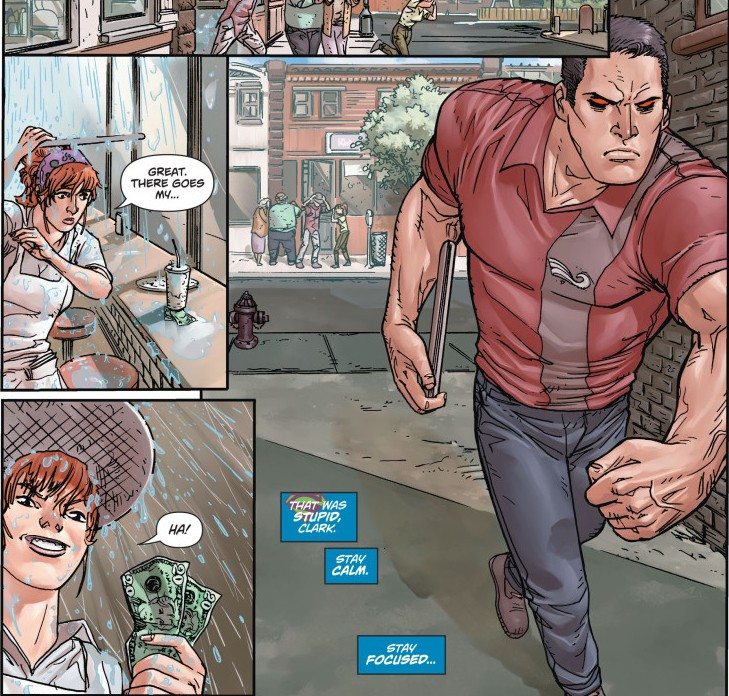 Like Batman, Superman’s got a bit of a not-so-nice streak when it comes to getting things done. Even though he’s trying to protect his friend, Hiro, in this issue, he does threaten Hiro with essentially destroying his business, to which Hiro responds that that was the least “Supermanny” thing he’s ever seen. True, indeed, Hiro. 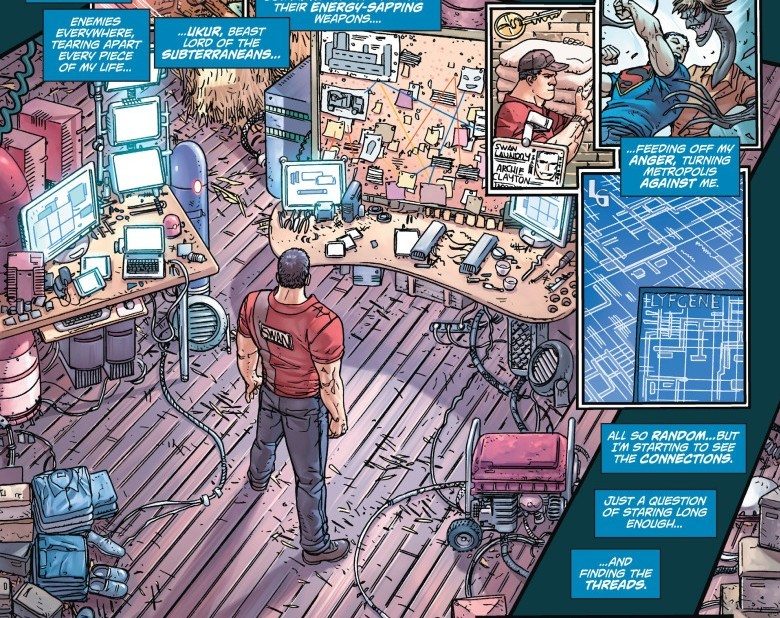 READ: CHECK OUT MORE OF OUR DC COMICS COVERAGE!

Superman’s still capable of bashing in heads and saving the day (the wonderful splash page to start the issue demonstrates that with aplomb), but he has to switch things up if he’s going to get to the bottom of what is apparently now a rather large and complicated mystery that he essentially has to bear on his weakened-but-still-broad shoulders. 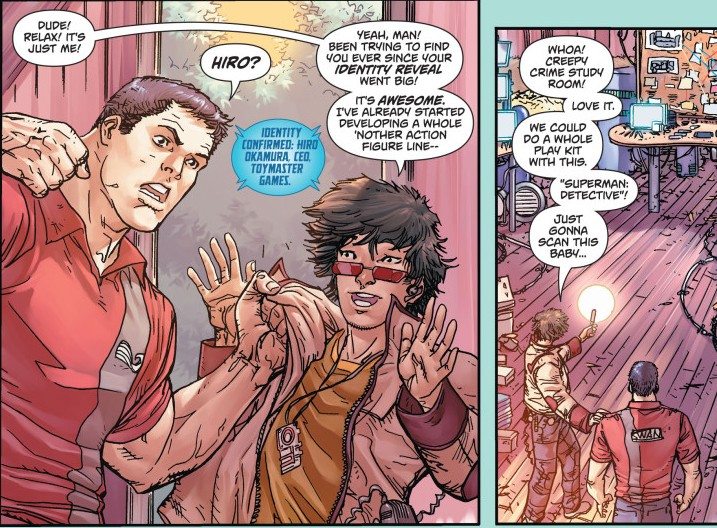 He looks particularly bigger in this issue, but that may have something to do with shaky art from Scott Kolins. The art is essentially effective, with competent construction and even a clever bit of visual trickery here and there, but ultimately what could be an attempt at dynamic art could come across as a little sloppy and unfinished. The perspective gets a little wonky at times, with Superman appearing huge…r than usual in some panels, and that’s not helped by some loose anatomical proportions in other characters. Some of the panels are ambitious in their size and complexity, so you wonder if Kolins got a little exhausted and phoned some bits in, or if that’s just the status quo (neither is good, but you hope for the former–especially if he’s going to take over pencilling duty). 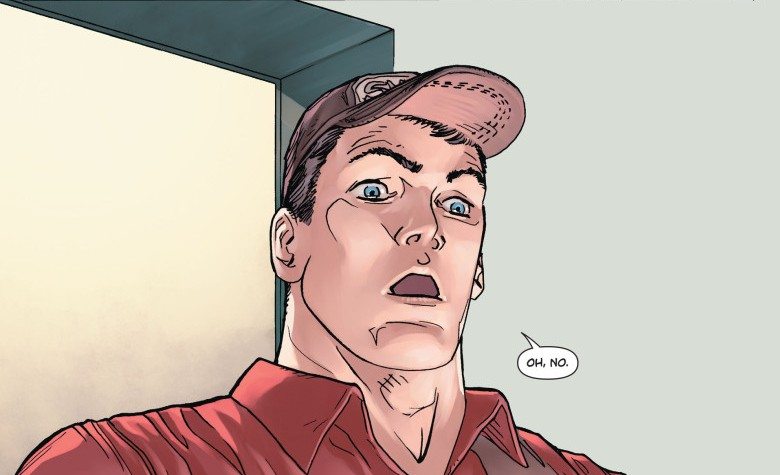 All-in-all, though, ACTION COMICS #45 gives us an interesting peek at Superman minus the Super, at a man who’s trying to find the super within himself. Unfortunately, it isn’t long before the title puts that aside for a more traditional “Supermanny”, science-fiction plot-line. This story is good, and it’s already bordering on having too many layers, so this new one is both unnecessary and probably too much. As always, though, it ends in such a way that reading ACTION COMICS #46 is kind of a given.