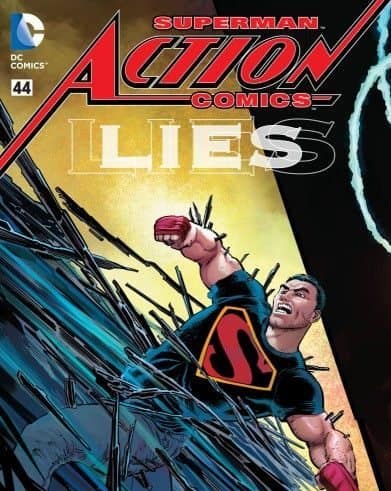 The Shadow threat grows out of control! Superman may have finally met his match!

Superman meets the source of the newest threat to Metropolis, a creature named Wrath. Her shadows are creeping into unsuspecting citizens, turning them against Superman and his friends. What happens when Superman’s own strength actually makes his enemies stronger?

Despite my misgivings concerning the plot turn in ACTION COMICS #43, #44 turns things right back around in an intriguing direction. The issue’s pacing is a bit odd, almost jarring at times, but on the whole, it’s much more thematically satisfying.

Subtlety isn’t one of Superman’s strong suits. Nine times out of ten, whatever issue Superman confronts can be solved by putting his fist through it. However, Wrath feeds off anger; so no matter how righteous Superman’s fury (and it pretty much always is), each punch he delivers only serves to empower Wrath and her shadows. On top of that, the shadows continue to feed on the anger within the Metropolis residents still angry at Clark/Superman: his personal betrayal now has a lethal face. They resent Clark/Superman for hiding amongst them, for essentially lying to them, but Clark knows they’re just afraid. They can’t harm him as humans, and now that they’re supercharged by Shadows, their actions aren’t their own. They are decidedly an enemy Superman can’t hit. 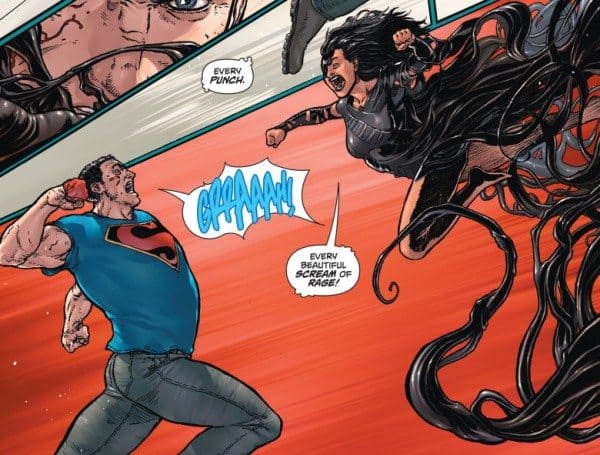 This is potent stuff, but, unfortunately, it’s rushed, and addressed solely in Superman’s internal monologue directly. Any impact it may have on the action unfolding is deflated by Clark/Superman spoon-feeding all of the subtext to the reader. Maybe I’m at fault for expecting something I shouldn’t from a Superman comic (though that seems unfair), or maybe it’s just the way the monologue itself was written, but I found myself sighing in frustration at having everything spelled out for me. I think it’s especially frustrating to find this approach in a comic book. In my opinion, comics find their sweet spot when juxtaposing art and text where meaning isn’t obvious, allowing the pieces to come together on the reader’s terms. The internal moments in ACTION COMICS #44, have no teamwork, just a powerful image of Superman surrounded by text that took all the work away from me, making me a passive observer to his internal struggle. 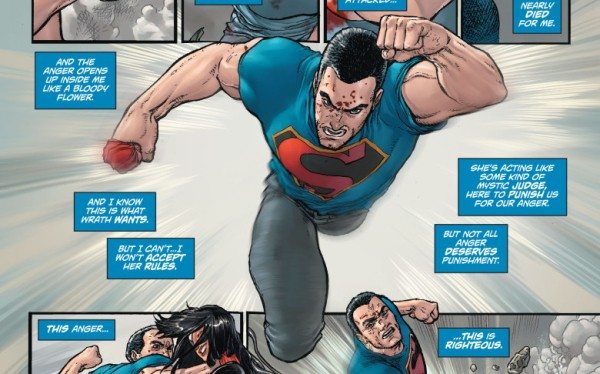 There is nothing passive about Superman, and there shouldn’t be anything passive about reading a story about him, especially this one. So far it’s been affecting and immediate, and in no place is that truer than in the art. Aaron Kuder continues to craft some of the most visceral and dynamic work in and out, month to month, and this issue might just be the greatest example of that yet. With the Shadow monsters on full display, Kuder and colorist Tomeu Morey get to flex their muscles even more, creating some truly horrific panels of half-human, half-shadow people, while at the same time struggling (intentionally) to keep the action from exploding off the page.

READ: DANIELLE OTRAKJI KNOWS A THING OR TWO ABOUT HORROR. CHECK OUT OUR INTERVIEW WITH HER!

The wild energy of #44 does make for some tricky reading, as panels and dialogue bubbles criss-cross and overlap. It may happen more times than I’d like (once is too much, really), but it’s hard to be mad at a team that’s creating such lively work. They may not have been the first to make the coloring on sound effects transparent, but it’s little touches like this that add a layer to the action that actually makes it feel as if its moving. You feel–that the sound is immediate and temporary, rather than something static. 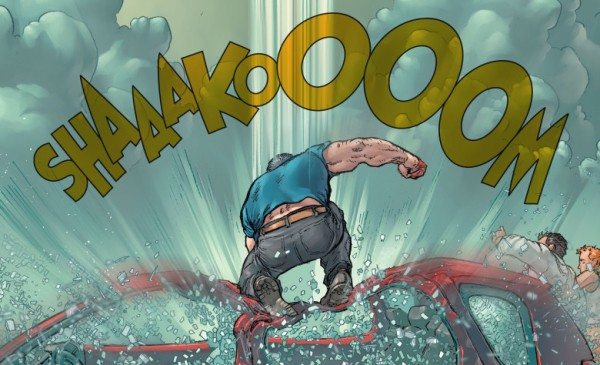 There is a jarring switch, both tonally and visually, in the issue’s final section–which I guess is appropriate as its clearly the issue’s epilogue, where it would seem Howard Porter takes over artistic duties. Unlike, say, the shift in GREEN LANTERN #44, Porter’s style is so bold and tonally appropriate that once you get over the initial change, you see that, given the right story (as he has to play with here), his art can be really effective. He takes the ugliness in some of the Shadow panels and extends it to the entire page, creating a Metropolis that’s closer to the slums of Gotham than the sweeping, sun-drenched skyscrapers we’re used to. It’s claustrophobic and dirty; almost oily. All while showing us that, given the chance, Porter can craft some gruesome body horror. The epilogue works great on its own, but it just hurts an already shakily-paced issue by feeling tacked on at the end.

Though I may not have agreed with its overall direction, the story always moved along at a strong pace; the storytelling is tight and assured. This issue felt in a rush to wrap up. So much happens in these pages that you wish they were all allowed to breathe a bit, but instead it comes off feeling rushed and ultimately unsatisfying. 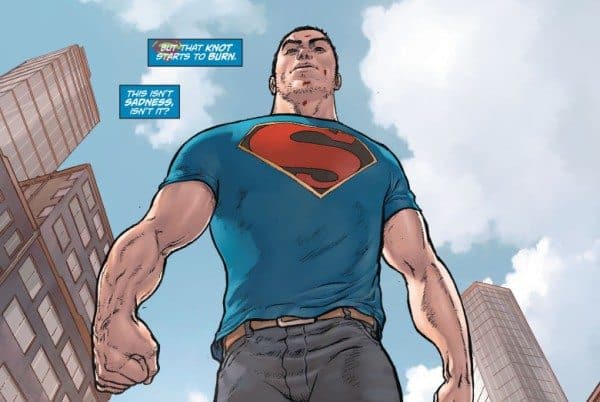 With #44, ACTION COMICS’ story, thematically, at least, is back on the right track. With consistently strong art, it’s far from a failure, but it seems in the midst of a balancing act that leaves certain elements wanting. Let’s hope that by #45 those elements can again work together to give this story the ending it deserves.