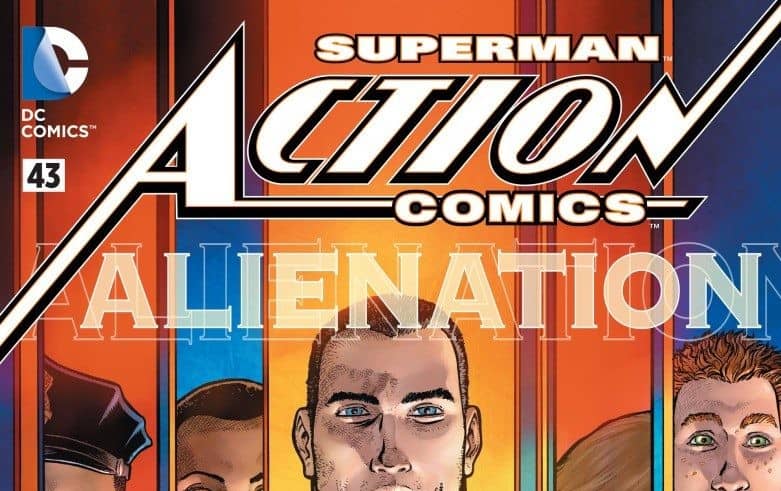 A tragedy is diverted and the day is won, but Superman and his friends don’t get long to enjoy their victory…

ACTION COMICS #42 ended with Superman punching a cop, an officer of the law in the Metropolis Police Department… Turns out that was okay because the guy was a shadow monster. The same kind of shadow monster that attacked Superman last issue. The officer that conspired to have that shadow monster attack Superman turned out to be one himself, and though Superman and his neighborhood rallied to drive the monster away, it’s not time to celebrate. Clark/Superman realizes things in Metropolis are much more dangerous than he thought but, despite his misgivings, his neighborhood friends won’t let him fight alone. Hope is restored, but that’s before they learn just how many shadow monsters are hiding among them.

Don’t get me wrong: ACTION COMICS #43 is a lot of fun and filled with great moments, but I can’t help but feel that a truly great Superman story just evaporated before my eyes. Why? Because it went full alien. I understand, this is not only a superhero comic book, but a Superman comic book, so there’s pressure to make the stories and threats to him extraordinary. Extraordinary doesn’t have to mean extraterrestrial, however. The shadow monster of the last two issues functioned so well as a plot device, but now that we know it’s a member of a race of shape-shifting beings that have infiltrated Metropolis, I’m disappointed. 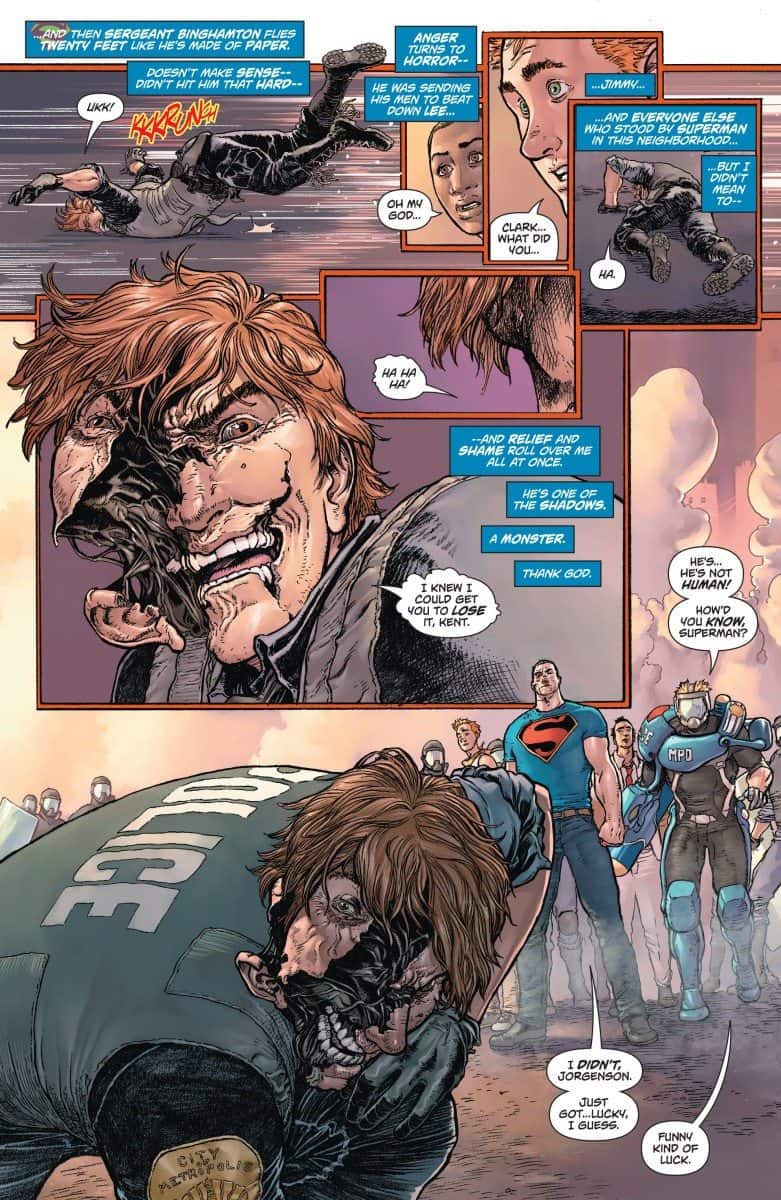 There was such great potential for this to be a human story–and human stories about Superman are the best stories about Superman. Superman is robbed of his powers but he demonstrates that it’s not his powers that make him super, but why he uses them. That fact inspires people, and it inspired his neighborhood in this issue. Even though there’s a relatively cheesy and obvious moment where Superman tells a gathered crowd that they are Superman now, you know deep down that he’s right. I wish that had remained unspoken, but that’s okay. I forgive it. Because Superman is cheesy. Superman is a hero that demands that we wear our idealism on our sleeve. Those of us too controlled by our cynicism root for Batman because he can engage the world in dark, dour, oppressing ways while still fighting for ideals.

I wanted that to be the driving force of this story: two ideologically opposed sides clashing over Superman’s place in society. That still happens, but it’s so much clearer who’s good and who’s bad that all thematic drama goes out the window. There are great moments in the issue where natural human fear manifests in ways that hurt Superman. These aren’t good things, but dramatically? From a fictional perspective? They’re excellent. Human fear versus human hope with Superman at the center could have been one of the defining Superman stories of the decade, especially given our current political climate. 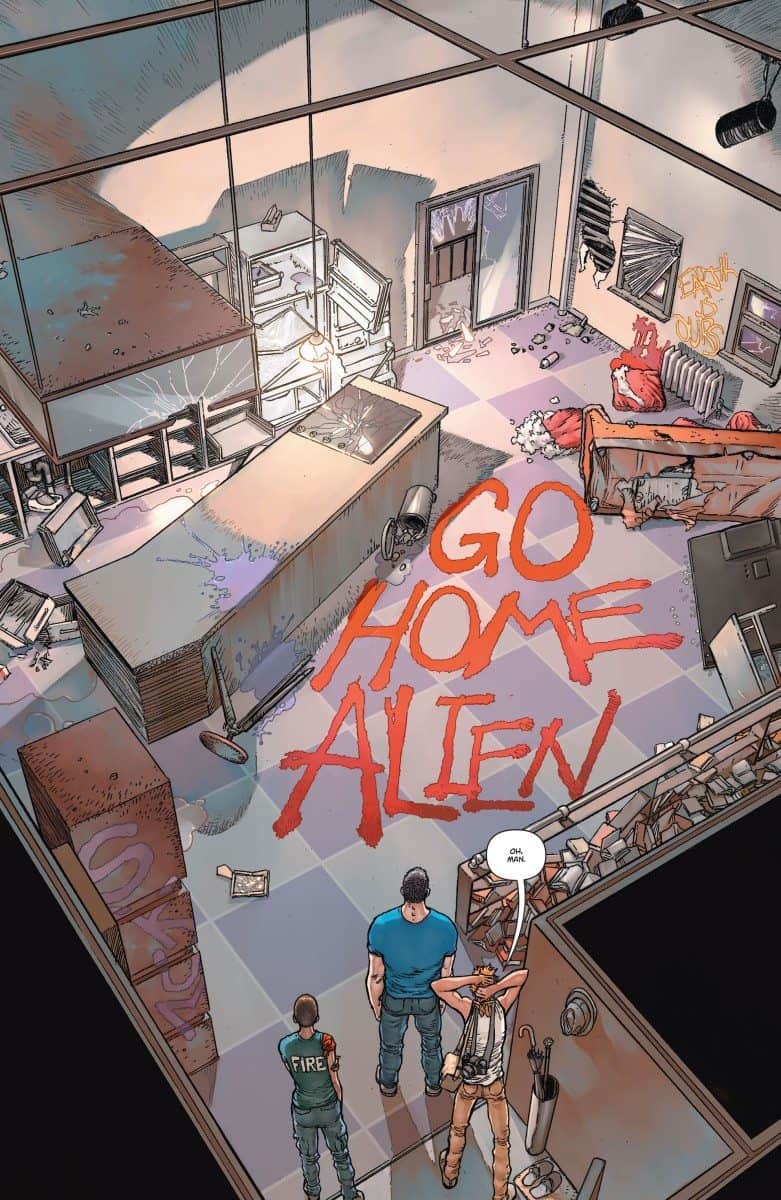 Fittingly, I still have hope. I enjoyed so much of this issue that I will eagerly read ACTION COMICS #44, but I’m hurt that the shift has been from ideological confrontation to a basic good hero versus bad alien story.

By this point, you may be wondering why I haven’t mentioned any of the artwork. It’s because it’s so damn good that it doesn’t need mentioning. It’s as good as it was last issue, and as good as it will be next issue. It’s a shame that because ACTION COMICS is arguably DC Comics’ flagship title, and DC Comics is so commercial, it won’t be given the kind of artistic consideration as, say, WE STAND ON GUARD might. All due respect to WE STAND ON GUARD and Image, but the team on this run of ACTION COMICS is firing on all cylinders.

READ: Check out Danny’s review of WE STAND ON GUARD #2! 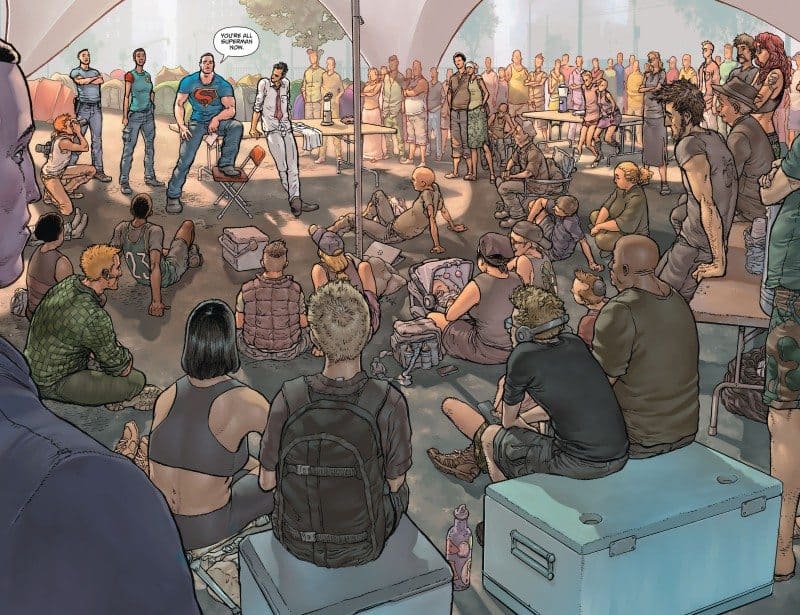 The art remains seamless, the colors remain rich, and the letters are damn perfect. Additionally, despite my disappointment with the plot’s direction, Greg Pak has a stupidly good ear for dialogue. Not once does it feel fake or forced or exposition-y, and each character has a clear voice.

This arc of ACTION COMICS has an excellent team holding it up. It’s just a shame that it now hangs in limbo between what it could be, and what it is.

CHECK OUT MORE OF OUR REVIEWS!