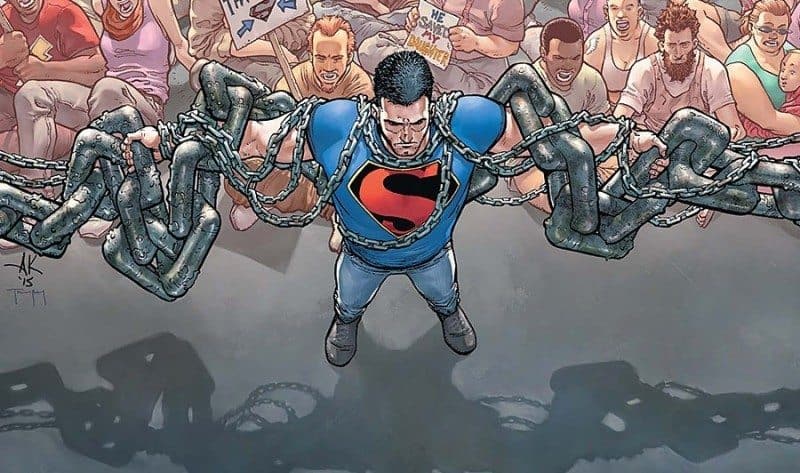 Superman has taken on Zod, he’s defeated Doomsday, and he’s gone toe-to-toe with Brainiac, but in ACTION COMICS #42 he faces his greatest challenge yet in the form of… the Metropolis Police Department? 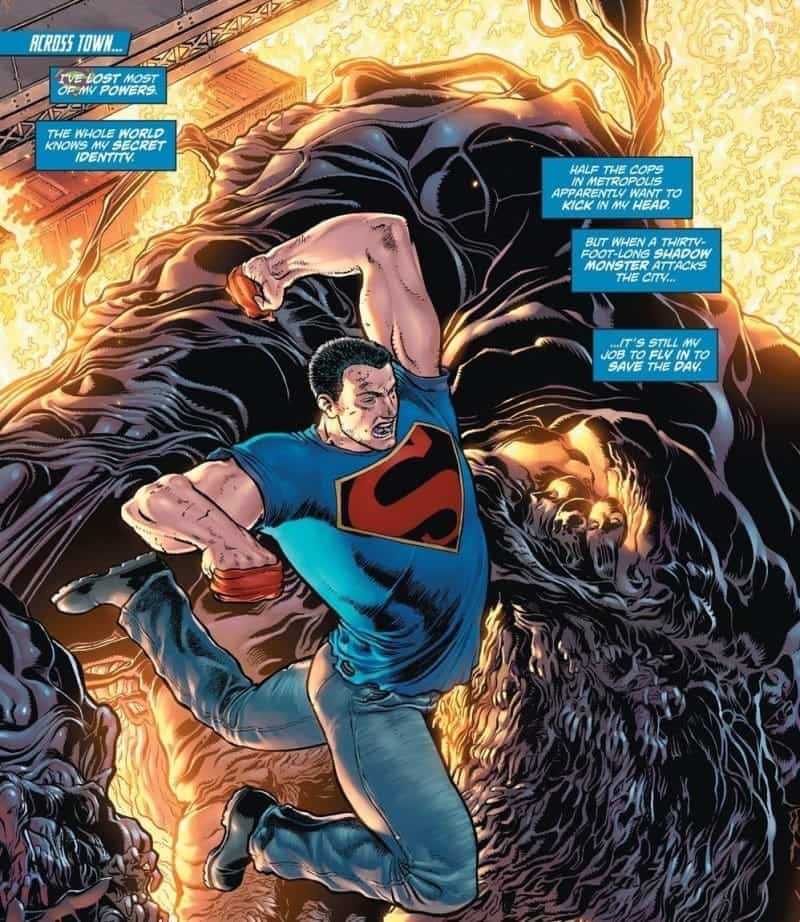 ACTION COMICS #41 ended with Superman taking on a shadow monster while the MPD moved in on a pro-Superman rally. The Metropolis PD, led by Sgt. Binghamton, believe Superman weakened enough to be too busy with the shadow monster to come to the aid of his neighborhood. ACTION COMICS #42 picks up with tensions boiling over, tear gas being fired, and batons clanging against shields. The cops are about to come down on the heads of the peaceful gathering as Supes swoops in at the last moment to make a non-violent stand.

There is a lot going on here, especially considering SUPERMAN is telling the story of what leads to this arc of ACTION COMICS in a parallel issue. There are a lot of questions to be answered in ACTION COMICS, but the immediate story is rich and potent enough that those questions can wait. Bolstered by vibrant and explosive art (the coloring by Tomeu Morey and Hi-Fi & Blond are at one moment subtle, another electric, and always rich), the current arc of ACTION COMICS is at once the BANG!-POW!-BOOM! Superman we remember from our childhood, but also a potent modern fable about responsibility, respect, and identity.

The residents of Clark’s neighborhood taking a stand against the cops is what Superman, as a character, as an icon, is all about. They are decidedly weaker than Superman, of course, and even weaker against their aggressors, but thanks to Superman, they know they have to stand up for what’s right, they have to try to be good. They are the ones who come to Superman’s aid, and when he, tired and almost broken, even flirts with the idea of giving up, he knows he has to honor their commitment to him.

He reminds the cops of what he’s done for them, and asks them to stand down. He tries to play it the way his neighbors play it, but that’s the challenge of Superman as a character, especially now that he’s weakened: when you’re seen as an unstoppable force, those that fear you are going to strike. How can you not defend yourself?

With the exception of this neighborhood rally, most of Metropolis hates Superman, hates Clark, but he knows that regardless, he has a responsibility for their safety. He’s weakened, he’s disliked, but he’s still Superman, and he still has to fight for those who can’t fight for themselves. It’s a rich conflict, told in the pages of ACTION COMICS with honesty and surprisingly patient pacing for a monthly issue of only 22 pages. The tension is given time to build, making Superman’s appearances that much more satisfying. Splash pages can be overused, but in this issue especially, they’re all earned. There are so many new arcs going on over at DC, but as (arguably) their flagship title, ACTION COMICS stands out above the rest.

One last thing: after reading so many comics, we can take panel-by-panel storytelling for granted. Take time to appreciate the tight, economical storytelling in ACTION COMICS #42 (and #41)—Greg Pak and Aaron Kuder are doing excellent work.