The verdict is in: Millennials love Absurdism. From SPONGEBOB to THE ERIC ANDRÉ SHOW, us youngin’s born between the early 1980s and the mid-1990s can’t get enough of this genre that is purposefully silly for seemingly silliness’ sake. (Say that five times fast.) So why, then, are Millennials told that we are killing comedy as we know it? And why, in God’s name, do we find a fish screaming “CHOCOLATE!” over and over again funny?

A basic tenet of absurdism and the movements that stem from it, like Dada, is that the absurdist act or piece of work is usually a response to something intense, like war or economic turmoil. Dada was associated with questioning the validity and purpose of art in a dark, post-World War I society. One famous piece of Dada art is when Marcel Duchamp’s postcard of the Mona Lisa with a mustache drawn on it, called it LHOOQ, a suggestive pun for you Francophones out there. Why did he make this? What is its meaning? Is it art? The point of Dada is not the answers to these questions, but the questions themselves. 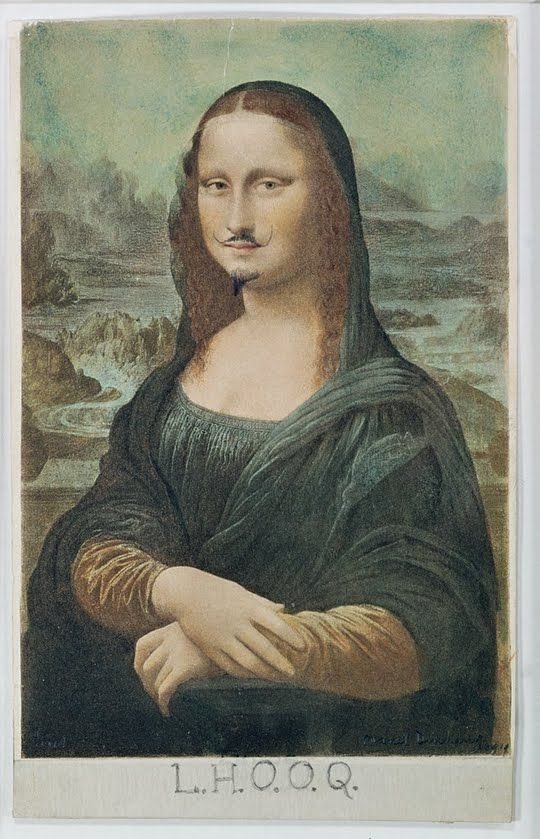 Dadaism was a movement reacting to World War I that was critical of the violence of war and of the policies that caused the war in the first place. It was a rejection of the world and the people running it. To go against “logic” and “reason” was to reject the same logic and reason that started the war.

The Millennial generation grew up during a time that was ready for this kind of absurdism to come back. Like their older counterparts at the turn of the 21st century, Millennials saw the world change in a way their parents’ world did not. This disconnect between what was believed to be true and the reality that came instead is dramatic. Often in discussions of the younger generation and how we fit into society, there is talk about how Millennials were promised the world and were given nothing. The so-called American Dream was revealed to be just that—a dream.

These generational differences sometimes come to a head in public spheres, like social media. One instance was on Twitter, when members of the Baby Boomer generation and Generation X  created the hashtag #HowToConfuseAMillenial. At first, it was mainly the older generation taking jabs at the younger generation, discussing how lazy Millennials are and how we don’t understand technology older than a smartphone.

And then the Millennials stepped in. They responded to the tweets, reminding the older generations of where they are responsible for certain aspects of our current social environment. One prominent example was the use of “participation trophies” as a means to insult the Millennial generation. People were quick to point out, however, who started giving out these rewards in the first place.

And of course, there’s the disconnect between what we were told by the older generations as children versus as adults. “Follow your dreams,” turned into, “Study the field that’s hiring.” There’s even a disconnect between the current state of the world and how the older generation perceives the reactions of the younger generation, like how it’s understood that we’re in one of the worst times to buy a house and yet young people are looked down on for not doing so. On top of all this, Millennials grew up in a time of rapid techological advancement, intense political turmoil, and fairly frequent national and international tragedies, all of which affected their relationship with the world. In short, Millennials and older generations see and experience the world in drastically different ways.

With a combination between the technological spike and the upending of our world views at young ages, we craved something that maybe wasn’t so bleak. It would have to be something that would still hold the attention of the modern child, who has been exposed to more mature concepts and ideas through growing technology and communication at an earlier age than older generations. Yet, this “something” should also make you laugh because everyone, no matter their age, needs humor in their life. For Millennials, absurdism was the available, ridiculous answer.

Are you ready, kids?

As if it was meant to be, SPONGEBOB SQUAREPANTS has become one of the most iconic cartoons for Millennials, which many still quote and talk about today. Premiering in 1999, SPONGEBOB was already an established show before the turn of the millennium. It featured a childlike sea sponge quickly becoming the poster child for perpetual optimism, regardless of the situation. Spongebob’s optimism is in defiance of his negative environment, from the boat driving test he fails time and again to his unwelcoming neighbor to the sometimes outrageous requests from his boss. SPONGEBOB, like the absurdist artists and comedians before it, encouraged a sort of attitude that went (and still goes) against society’s preference for sarcasm and cynicism.

READ: Well I, for one, welcome our new beauty overlords. Read this article about Beauty YouTubers!

It was also just really weird. It often mixed live-action with animation, like in the episode called “Pressure.” The episode shows Spongebob and Sandy arguing over which is better, land or sea creatures. It eventually shows Spongebob and his underwater crew going on land, where they are depicted with puppets in a live-action setting. It also shows a sense of irony and makes fun of itself, like in the episode “Party Pooper Pants,” with Spongebob complaining about an invitation sent to him on a piece of paper which was ruined because the ocean made the ink run. He said, “Whoever sent this clearly has no idea about the physical limitations of life underwater. Well, might as well throw these in the fire,” before he and Patrick do just that and warm themselves by said underwater fire.

This sense of irony in SPONGEBOB planted the seed in young Millennial minds that humor that is unafraid to be ridiculous can be valid and, essentially, hilarious. There was a subconscious need for absurdism in the face of rising real-world tensions that SPONGEBOB tapped into and fulfilled. This is true not just for the personal humor of Millennials and what kind of jokes they tell or quotes they mimic, but also what kind of comedy they would watch in the future.

And now for something completely different

With predecessors like SPONGEBOB having such an influence on Millennials, it’s easy to see why there is another wave of absurdist humor coming up right now, as those Millennial chilren are now adults and producing their own content. One comedian that deals heavily in the theater of the absurd is Eric André, of THE ERIC ANDRÉ SHOW.

READ: Training for life online? Read this article about MMOs.

THE ERIC ANDRÉ SHOW normally starts out with André destroying something like his desk or some other part of the set. No reason why, just because. During the interview section of the show, it’s held that the celebrities invited onto the show are not aware of what André is going to do or say. This can result in anything from his coffee mug being used as a blender to ripping up the carpet to surprise nudity.

André’s show premiered in 2012, a year that had just seen the widespread revolutions in the Middle East and would see a rise in nationalism in the U.S. and Europe over the next few years. Similar to SPONGEBOB, THE ERIC ANDRÉ SHOW found itself in a good chronological spot, especially with the increasing amount of time we spend with our ever-growing technology. The Internet only helped spread the show’s popularity through social media and by showcasing the series with clips of the show on the official Adult Swim YouTube channel.

In the tradition of the Dada movement, Eric André reacted to the 2016 presidential election in a truly absurdist fashion, namely in the episodes where he visits the Republican and Democratic National Conventions.

READ: We’re getting ready for FREE COMIC BOOK DAY! Are you?

Both times we see the comedian do what he does best: make people uncomfortable. He asked TMI questions about bathrooms, “subtly” interrupted interviews, and purposefully fell while spilling a bunch of papers in a crowded section of the RNC. (He, unfortunately, got his press pass revoked at the convention.)

André didn’t go inside the DNC arena but he did spend time outside of it with protesters and supporters who also couldn’t or wouldn’t go into the actual venue. He pulled some similar stunts, including one where he just holds up a sock and asks people to smell it.

While the Internet gives absurdist television a wider audience with the help of official networks’ social media outlets, streaming services, and, let’s be honest, file sharing websites, the Internet has its own absurdist culture. From the abundance of memes populating social media to the experimental video art of YouTube, the infinitude of the Internet is the perfect home for absurdism because they are usually short-form and users can create their own content free from oversight. One Twitter account that falls into this category is the @birdsrightsactivist handle. The account’s user claims to be a bird with the uncanny ability to express its semi-coherent thoughts on the social media platform.

While a lot of the tweets from the account is silly and mostly done for pure enjoyment, there are times when the account is clearly satirizing current events and prominent people. As of late, the account has been satirizing the current Trump administration with tweets such as “I didn’t loser the propular vote it was fraud. and since it fraud I think is safe only I do allowed to vote frome now on case dismiss.”

The on-purpose faulty grammar and spelling are what make it absurdist. Its near-hysterical and quick-paced tweets sort of remind us of a small bird’s jerk movements and flightiness. In a way, it’s reminiscent of the political landscape as well. Like the post-WWI world of the Dadas (though obviously less violent), the political world doesn’t make a whole lot of sense anymore and the logic and reasoning of the past doesn’t seem to apply. The 2016 campaign itself provided a lot of material for comedians as audiences hungered for something to point the mirror at the mess we allowed to build up. Absurdism provided this outlet because it makes the real-life absurdity feel a little more bearable.

READ: Read about this author’s time at Standing Rock Reservation!

Millennials have a different idea about what constitutes as funny because of the different types of comedy we grew up with and the environment we grew up in. We knew the world as one way and then, after a tumultuous start to the 21st century, we knew it as something else. That “something else” is something we’re still trying to figure out as we get older and as we share memes ranging from cats with lasers for eyes to darkly hilarious references to Edgar Allen Poe’s THE CASK OF AMONTILLADO. Millennials identify with absurdist humor because, while teetering on the line towards escapism, the humor does offer a direct criticism of the current state of the world. (You know how well we can multi-task.) There is an unspoken understanding that yes, this work is ridiculous and yet, it’s not a whole lot worse than real life.