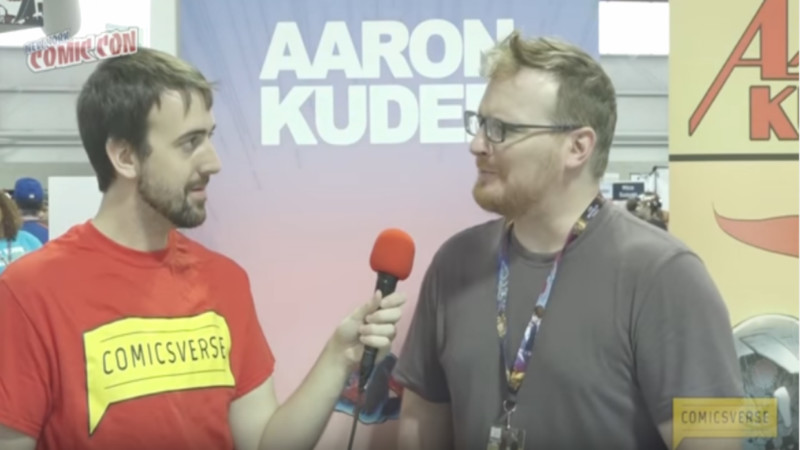 We had the great pleasure of interviewing Aaron Kuder at New York Comic Con 2016. Kuder is a writer and artist known for having worked on comics such as GREEN LANTERN: NEW GUARDIANS, AVENGING SPIDER-MAN, and LEGION LOST, among others. However, Kuder is probably best known for his work with writer Greg Pak on their ACTION COMICS run. He has also done the art for numerous comics in DC’s “The New 52” and has worked on numerous covers, including those of SUPERMAN VOLUME 3 #23 and CONVERGENCE #3. Kuder’s art style is often praised for its dramatic sense of weight.

READ: Aaron Kuder’s work on ACTION COMICS  with Greg Pak is on our essential reading list! Here’s why it’s great.

Kuder began his career in comics in 2000 when he joined the Ten Ton Studios Forum. There he met artists such as Riley Brown, Chris Chua, and Chris Burnham, who landed him his first big break on THE ARMORY WARS: IN KEEPING SECRETS ON SILENT EARTH III in 2010. Since then, Kuder has quit his day job as an electrician to draw comics full time.

We talked about his European comic art influences, the difference between European comic art and Western comic art styles, what it’s like working with Greg Pak, Charles Soule, and Jeff Lemire, as well as his most recent work with Marvel Studios on DEATH OF X, the Marvel character that he wants to get his hands on, and wanting to return to writing his own comic stories after a few more years of drawing professionally.

You can find him and his body of work on DeviantArt as well as on his personal website, aaronkuder.daportfolio.com. You can also follow him on Twitter @AaronKuder where he tweets about his latest projects.