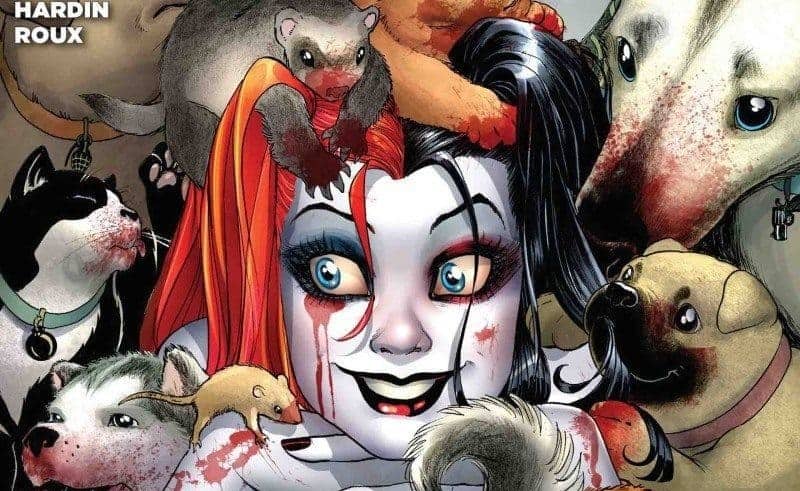 Way back when, my wife and I used to haunt the comic book shop in Warrington, Cheshire (UK) which has long since gone (sadly), our primary purchases where Batman (all flavours), X-Men and Catwoman.   A close friend of mine (hello, Mr. Hatch) understood our comics and occasionally had a look in them, however, he wouldn’t entertain Catwoman.  His reasoning was that it was rather pointless as she is based in Gotham City, she is bound to run into Batman, and due to this it’s really only a Batman comic.

When # 1 of Harley Quinn dropped into my Nexus7, Mr. Hatch’s rather blinkered view washed across my mind; thoughts of, ‘You can’t have H.Q. without the Joker/Batman so what’s the point?’.  On top of that my dislike for the character of Harley Quinn across the cartoons and comics made me biased before I opened it.  As a responsible human and reviewer I gave myself an internal telling-off and began as a neutral reader.

I read it cover to cover and albeit the artwork by Chad Hardin is rather great, the story by Amanda Conner, Jimmy Palmiotti came across as a bit over the top, first bordering on the ridiculous, and then to the cusp of dull.  Take for example an early start with Harley’s bike piled high at the back full of her belongings. I’m more than aware that comics really aren’t “real-life” but at least some try to stay in the real world. But then a giant wooden mallet is taken from the belongings; as a grown up my mind will not allow this ridiculous nonsense.  Then our story continues as Harley arrives at her new home and discovers she needs to get a job to pay the rates on the building, oh and collect the rent; this is really a story that is gripping me here, rent collecting is up there next to Bane snapping Batman’s back.  Yes I’m being sarcastic I know, but I left this issue with a “What’s the point?” attitude.

A month later I got the chance to review #2, as a reviewer I like to give comic’s a second chance especially new comics; it would be wrong not to.  I can safely say that after reading issue two I’m going to me giving the rest of this series a wide berth.  The art once again cannot be faulted it really does look good, this comic fails due to its going no-where story which this time borders on the dull to childish.  In this week’s tale Harley rescues animals from an animal shelter that were about to be put to sleep and Poison Ivy arrives for a sleep over, it was the Poison Ivy arrival that made me want to stop reading.  The reason being is Harley confides in a talking stuffed, burnt beaver, which only Harley can hear him speak; when Ivy arrives Harley asks her if she’d like to meet her beaver to which Ivy stares wide-eyed and with a Cheshire cat grin.  Now when I was fourteen I would have been rather giddy about this comment, but at thirty-eight I find this rather crude to be honest.  Perhaps this is the problem I’m having with Harley Quinn, these stories are written for people that like suggested lesbian titillation and saving kittens and dogs from the mean old rescue centre.

It’s quite clear that when maturity sets in Harley Quinn isn’t for you.