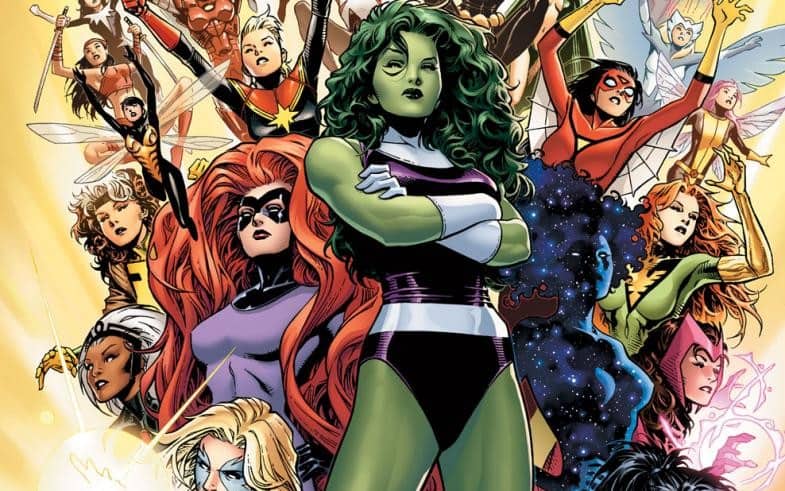 The super heroines are back in action, and they are taking no prisoners with the knockout A-Force.

This action packed new series begins by describing the world of Arcadia as an island isolated from battle world that A-Force is assembled to protect. She-Hulk is their fearless leader as the numerous female superheroes seek to protect the city in this first issue from a Megalodon. All of the main super heroines are introduced throughout the fight. Captain Marvel punches the shark in the face. Sister Grimm Skewers him with her magic. Dazzler attacks him with her lasers. The last character we are introduced to is the always sassy Ms. America. The battle continues to escalate as the team works together to protect the civilians while fighting a supposedly extinct shark., but eventually Ms. America’s temper gets the best of her to a truly comic effect and she throws the shark through the barrier into the Deadlands.

Ms. America and the other super heroines are then approached by Sam Wilson, one of the thors, who informs them that America has violated Battleworld’s greatest laws by violating the shield. This action is inexcusable in the eyes of Victor Von Doom, the leader of Battleworld, and She-Hulk is ordered, much to her chagrin, to sentence America to a life sentence at the prison of the Shield. She pushes back saying that she does not believe that the rules are just, but carries out the punishment anyway. The Thors fulfill this decision by sadly taking her away from the arms of Loki and Sister Grimm. She-Hulk is infuriated by the entire situation and summons the submariners to help decipher the reason behind the Megladon attack. At the bishop lighthouse, however, Sister Grimm is morning the loss of America until she sees a large light fall from the sky. What she finds when the smoke clears is a mysterious woman covered in a beautifully drawn galaxy print from toe to hair, who we know is the Singularity. 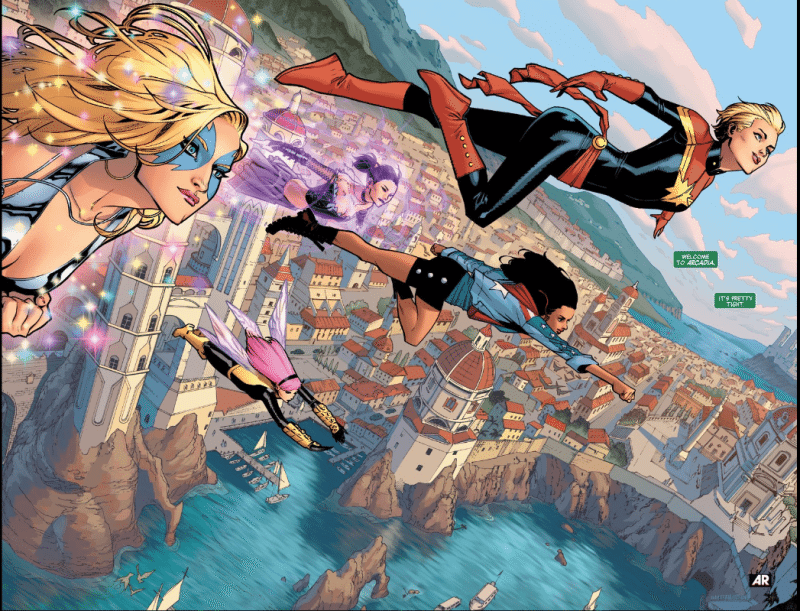 A-Force is another new title during the cataclysmic event that is Secret Wars, and it is beginning to show us all of the ways that these titles are simultaneously their own property and a part of the larger world, particularly with the integration of Doom and the Thors; however, what is really exciting about this comic event is the fact that is centered all around these amazing female super heroes. Ms. America’s quips are a particularly stand out moment, but the short introductions for each character are also a humorous plus. Ms. America’s is “She’s beauty and she’s grace. She’ll punch you in the face” (It’s funny because it is true). However, despite all of the amazing female leads we have here the comic never falls into discussing the fact that they are women. It never calls attention to the fact that this world is ruled primarily by the females. Since A-Force is one of the comics that is supposed to survive the Secret Wars, it is a good start in the right direction along with comics like Spider-Gwen, Ms. Marvel, Captain Marvel, and numerous others to bring women’s stories more to the forefront. 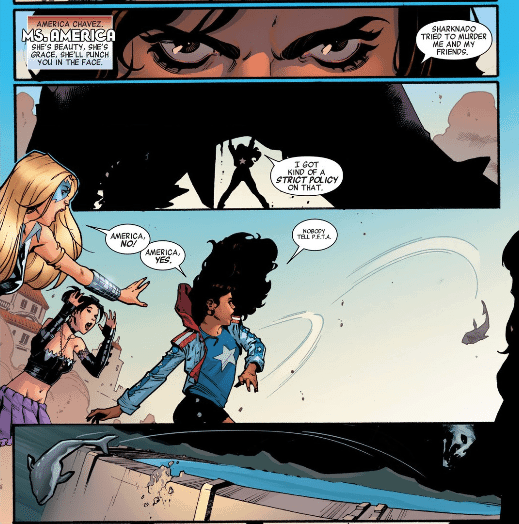 In relation to the many articles circulating around whether or not this comic really represents a feminist utopia, I believe that Wilson’s response in defense of her comic really sums up the reason why there is a lot of positives in it, but I do have one quibble. This world is predicated on the idea that these women are in charge, but the main antagonist is a white male in the form of Victor Von Doom. Furthermore, he has the power to force the She-Hulk to abide by laws that she does not believe are just. I will concede that I believe that the story arc, by placing him in the role of the chief antagonist, will enable the characters to effectively battle what is a barrier to the power of women currently in a patriarchal society, the white male. However I did want the comic to be female centric to such a point that even the main villain was female. But it is still unclear where exactly the mystery and the story will take us so I am excited to see where it will actually go. 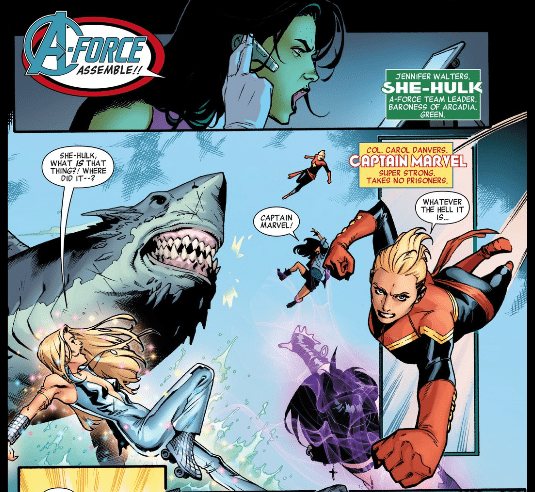 That feminist quibble aside, the comic is extremely entertaining and beautiful. G. Willow Wilson, who has worked on Ms. Marvel and X-men, really shines in her ability to write for these different quirky characters and the comic allows for some very interesting relationships. Ironically enough She-Hulk does not necessarily get a lot to do as a character, but her expositional narration is extremely enjoyable. As far as the big battle with the shark I have to admit that I absolutely loved it, and it was an extremely excellent device to introduce the main players while allowing for some extremely funny dialogue between Ms. America, Dazzler, and Captain Marvel. In addition, the comic also plays with the concept that a feminist utopia is definitely not perfect, because what society is, but also that it is possible for women to have evolved to exist in a matriarchy instead of a patriarchy in this society. Male superheroes exist, but they are just not a part of A-Force.

Something else that is greatly affecting how much I love this comic is this comment that I encountered when looking up this comic on Marvel this week. “Is marvel’s goal to alienate it’s male customers? Why not make an all-male hero comic with zero women?” I just want to point out that most comics are mostly male with zero women leads. Even with the Secret Wars Tie Ins that were published this week: Deadpool’s Secret Secret Wars, Avengers World, Daredevil… the list goes on but they are all primary focused around our male heroes. A-Force is coming at a crucial time within the comic world, and as everything else is calming down this title presents a space for women to rule. Let’s all enjoy the ride.