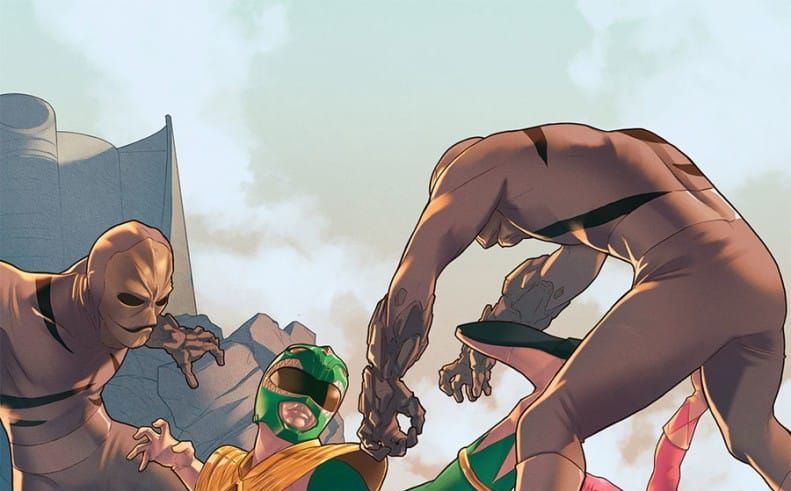 After last month’s zero issue set the stage, this week saw the release of the first issue of Boom Studios MIGHTY MORPHIN POWER RANGERS. The series from writer Kyle Higgins (NIGHTWING, BATMAN BEYOND) and artist Hendry Prasetya (POWER GIRL) presents a new and contemporary take on the classic franchise while still maintaining the elements that the fan base feels nostalgic for.

The first issue of MMPR kicks off with perennial bullies Bulk and Skull recording an episode of their YouTube series dedicated to the Power Rangers. During the broadcast, they run through the public perception of Rangers history up to that point, including a discussion the Green Ranger’s transition from enemy to ally of the team. As part of the show, they attempt interviewing Tommy to get his take on the Rangers, which he refuses to give as he’s still troubled internally by doubts on whether he belongs on the team. On top of that, Tommy’s still being psychically haunted by Rita, as seen in the zero issue. 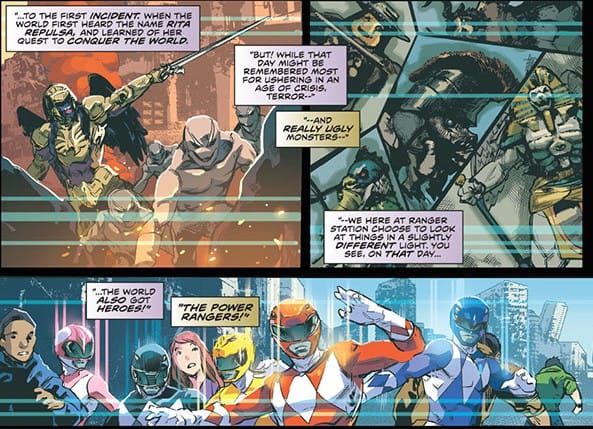 Looking to ease his doubts, Tommy joins Kimberly in a “danger room” style training session at the Command Center, which he believes he’s failed until Zordon reveals it was a deliberate no-win scenario. Despite Zordon’s admission, Tommy insists on running the program again, blowing off a date with Kim in the process and leaving her disheartened. A heartbroken crush is the least of Tommy’s problems by the issue’s end however, as Tommy is left in a perilous state thanks to (SPOILERS). The issue also contains the second installment of a comical on-going BULK AND SKULL backup feature by Steve Orlando and Corin Howell.

MIGHTY MORPHIN POWER RANGERS #1 lives up the high expectations established by the zero issue. It’s obvious that Higgins has an affinity for the material, as he treats the concept and characters with respect. His storytelling not only modernizes the Rangers and their environment (YouTube, smart phones, etc), but also imbues them with a maturity rarely seen in the franchise, especially in the early years. The characters seem like real human beings in their interactions, feelings, and dialogue as opposed to the child-like cyphers they came off as during the early MMPR-era of the television series.  That’s not to say that the book is  grim, gritty, or dark however, as there a certain light adventurous quality to even the darkest moments. I also appreciated the  pace of the story, which never drags but doesn’t give anything away too fast either. This is perfectly exemplified by the fact that the only time we see any of the characters morphed is during Tommy and Kimberly’s training exercise. 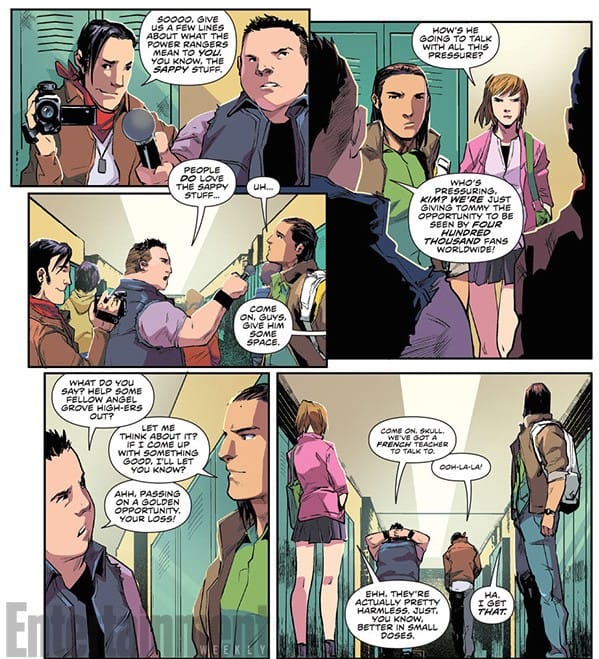 Like many projects over the history of the franchise, a vast majority of the character work in the issue goes to Tommy Oliver. It’s clear that the first major storyline of the book is going to deal with the Green Ranger overcoming his doubts and becoming a full-time member of the team. Kimberly gets the second most play in the story, which isn’t surprising considering she’s getting a Pink Ranger-themed mini-series from Boom starting in May. Jason and Zack don’t get nearly as much page time, however Higgins plants the seeds of an interesting storyline for the two that should pay dividends as the title progresses. Unfortunately Billy and Trini are lost in the shuffle and don’t really do much of anything, though I’m hoping that’s simply a first issue problem and they’ll each have time to shine in upcoming issues.

Henrdry Prastya’s art is a bit of a mixed bag for me. His work on the book’s supernatural elements is spot-on, and his Power Rangers look especially good in action. However, the un-morphed civilian forms of the characters leave a lot to be desired, especially their faces which often look unfinished. 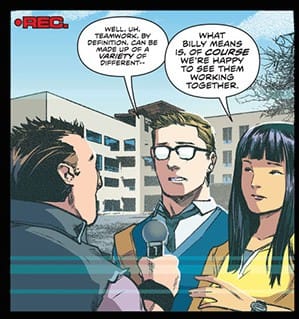 MIGHTY MORPHIN POWER RANGERS #1 is a definite must-read for die hard fans of the franchise, or those simply looking for a nostalgia-fix from their childhood.