STAR WARS: VADER DOWN #1 by Jason Aaron and Mike Deodato 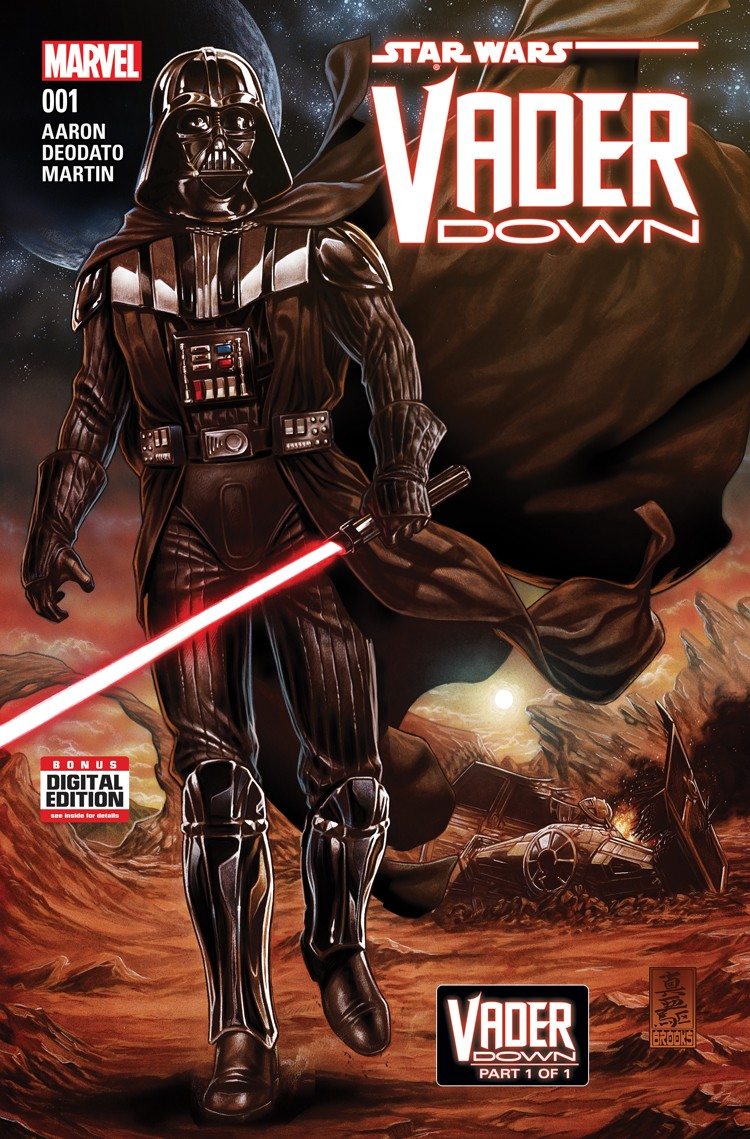 2015 was a fantastic year for STAR WARS fans. A new movie released, new books hit store shelves and, of course, Marvel Comics unleashed a slew of phenomenal STAR WARS titles. In the midst of this, they also released one of the best event mini-series of 2015 with VADER DOWN. A stellar story that could even hold up to having its own film adaption. The best of all these issues, however, has to be VADER DOWN #1.

The STAR WARS universe is known for a few things: Epic space battles, cool, funny characters, and Darth Vader. This issue has all of those things in spades. Jason Aaron proved himself a master at writing the STAR WARS universe. VADER DOWN #1 is a clear example of this. The dialogue is crisp, snappy and never overwrought. Moreover, he manages to hit the tone and voice of each of the iconic characters perfectly.

One of the best things about the STAR WARS Marvel Comics has been the inclusion of new, fresh characters. No characters stand out more than Aphra and her Droids BT and Triple-Zero. The Droids are essentially doppelgangers of R2-D2 and C-3P0, only with murderous intent and dark, twisted humor. Their inclusion here adds some comedy and levity to the proceedings, but at the same time presents these characters as a real, deadly threat to our heroes.

But the true standout is, you guessed it, Darth Vader, himself. Jason Aaron presents Vader as a force of nature here. He has one goal, and he’ll tear through every single Rebel scum he comes across until he reaches that goal. He wants to confront Luke Skywalker. While that probably won’t be happening because they can’t meet formally until EMPIRE STRIKES BACK, the tension that’s being built up here is palpable. Vader is an absolute badass in this issue, cutting through Rebel soldiers like Swiss-cheese.

Mike Deodato brings his patented dark, gritty and realistic look at the STAR WARS universe and to great effect. The sandy world of Vrogas Vas looks great under Deodato’s pencils, and his Vader is absolutely iconic. Moreover, his depiction of the opening space battle is nothing short of breathtaking. Watching Darth Vader annihilate the Rebel Alliance in space combat is awesome, and it stands as one of the better dogfights I’ve ever seen in comics.

READ: Need more STAR WARS in your life? Check out our review of STAR WARS #16!