Some time ago, I picked up my first Valiant comic. It was QUANTUM AND WOODY #1. I got it in a very classic comic book way; I was at the store, and I liked the cover. Luckily the comic turned out to be great, and it prompted me to explore the Valiant Universe in Valiant Comics.

With Valiant’s BOOK OF DEATH arriving this week, I couldn’t think of a better time for a new reader to get into Valiant Comics. Valiant has been doing some incredibly interesting things in the last few years, including making their comics incredibly accessible to new readers. BOOK OF DEATH is the latest in their excellent “stand-alone crossovers,” and it features several characters of the Valiant Universe attempting to divert a prophesized extinction event. You can pick up BOOK OF DEATH #1 and enjoy it from the start, though it does expound on elements from The Valiant, the company’s similar event earlier this year (which also stood alone while incorporating elements of many Valiant series).

The Valiant Universe shares many similarities to a traditional comic book universe: many characters occupy the same playing field and their actions often affect other titles. However, there is a consistent effort for each title to stay consistent for singular readers, as well as those who keep up with the whole line. Essentially, they’ve carefully developed a line of titles that are uniquely able to stand-alone and enhance each other. They go far beyond traditional superhero comics in terms of content and offer exciting new versions of the familiar. With that in mind, here are some of my recommendations on how to start your Valiant Comics journey:

THE VALIANT by Valiant Comics 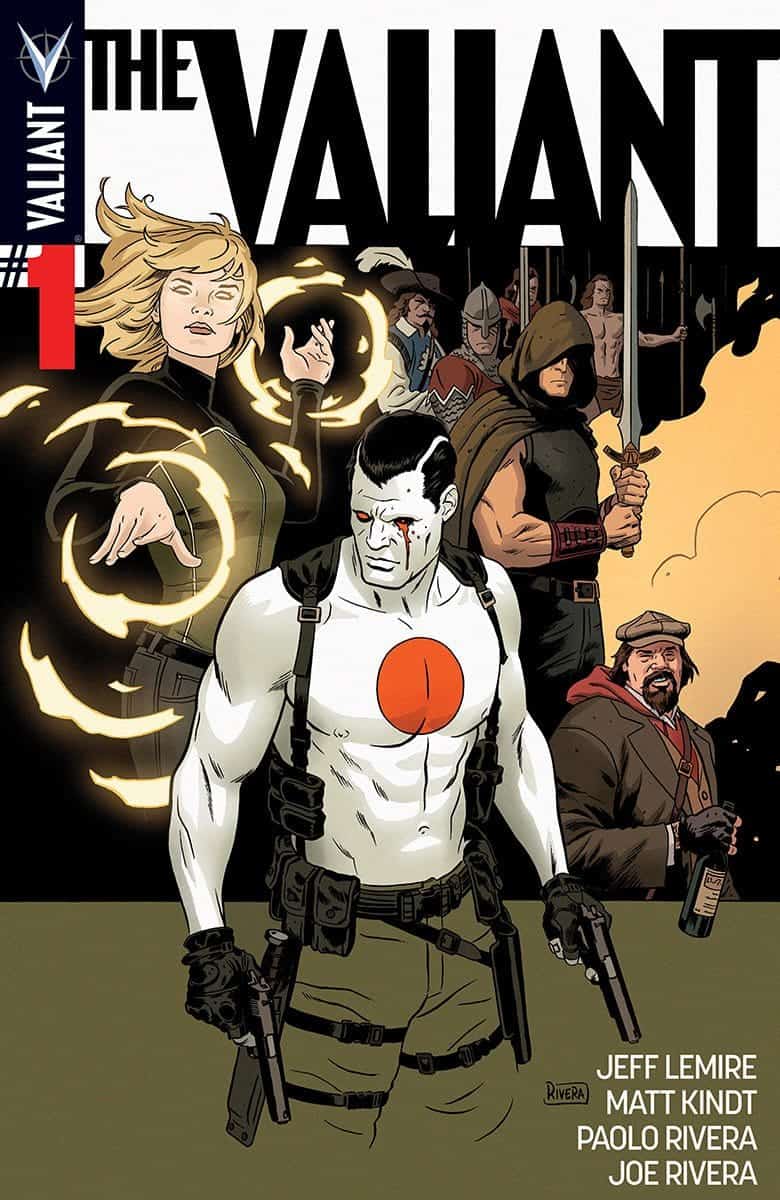 This beautiful comic—by Jeff Lemire, Matt Kindt, and Paolo Rivera—features many of Valiant’s most prominent characters working to defeat a timeless villain called The Immortal Enemy, who has been plaguing his counterpart The Eternal Warrior for millennia. The Eternal Warrior banded together with friends and colleagues from around the Valiant Universe, including the conflicted assassin Bloodshot and the extremely powerful X-O Manowar in order to stop The Immortal Enemy, who has bested The Eternal Warrior several times in the thousands of years they have tangled. This is a great introduction to the universe and its characters. It features excellent art and a moving story that allows for new readers to catch up quickly. And it ties directly to the current BOOK OF DEATH miniseries! Pick this one up, you’ll love what happens. Beyond THE VALIANT, I have several recommendations for further Valiant Comics reading. 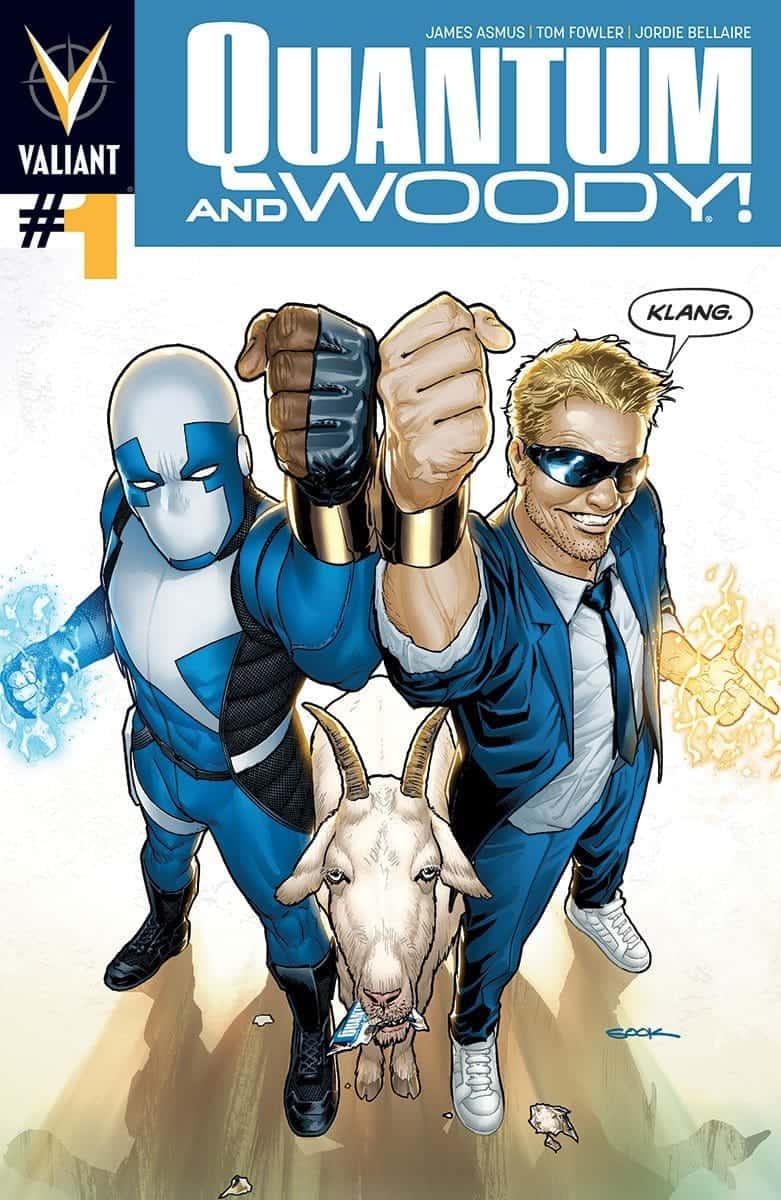 This is what got me into Valiant, as I said above. QUANTUM & WOODY features two formerly-estranged brothers with tech-based superpowers. They meet at their father’s funeral and run afoul of a scheme involving shady government agencies, super science, robots, and a lot of fun. Q&W is very funny, yet often touching, with consistently good writing from James Asmus and art from (mainly) Tom Fowler and Ming Doyle, with Steve Lieber excelling on the recent QUANTUM AND WOODY MUST DIE! It broaches important subjects as complex as adoption and race while maintaining a generally light mood. Start with the first trade, and pick up THE DELINQUENTS afterward, which pairs Quantum & Woody with… 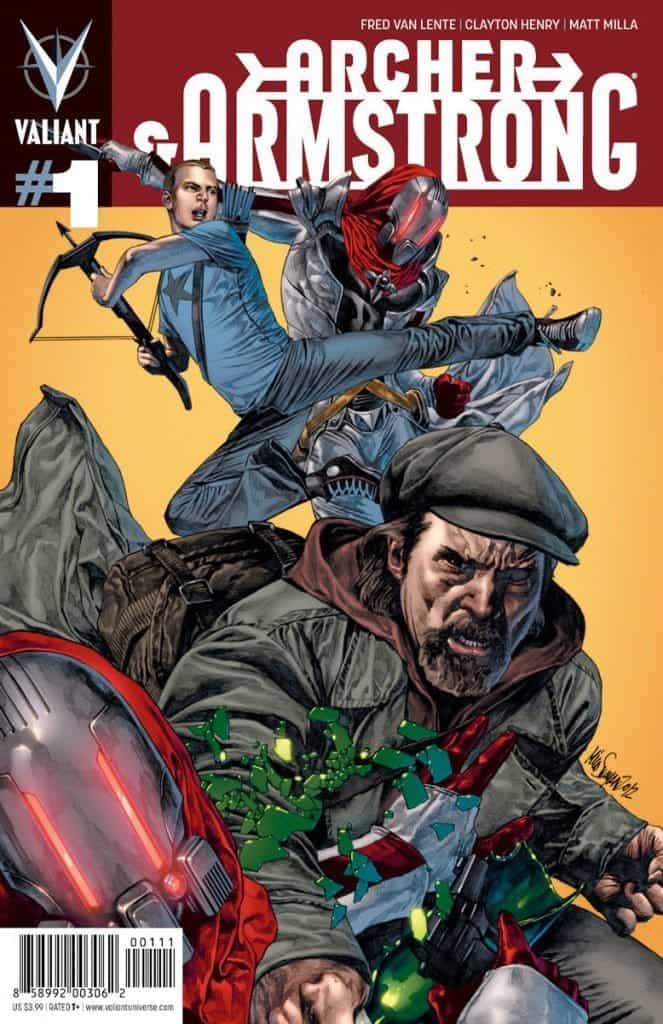 They’re another “buddy comedy” style duo within the Valiant Universe. Armstrong is an immortal strong man, much in the vein of Marvel’s Hercules (though often more sincere). He is paired with Archer, a young man who, having grown up in a strange religious cult, has a very unique outlook on life, and his initial mission to assassinate Armstrong. This absolutely goes awry, and circumstances force the two to join together and turn against Archer’s former masters. The aforementioned Delinquents miniseries pits Quantum & Woody against Archer & Armstrong in a race to find a hobo’s treasure and features fantastic clashes between both duos.

Not into humor comics? That’s okay. Valiant has you covered. Perhaps you’re looking for something more serious? If you like Iron Man and Spartacus (hear me out), try X-O MANOWAR. 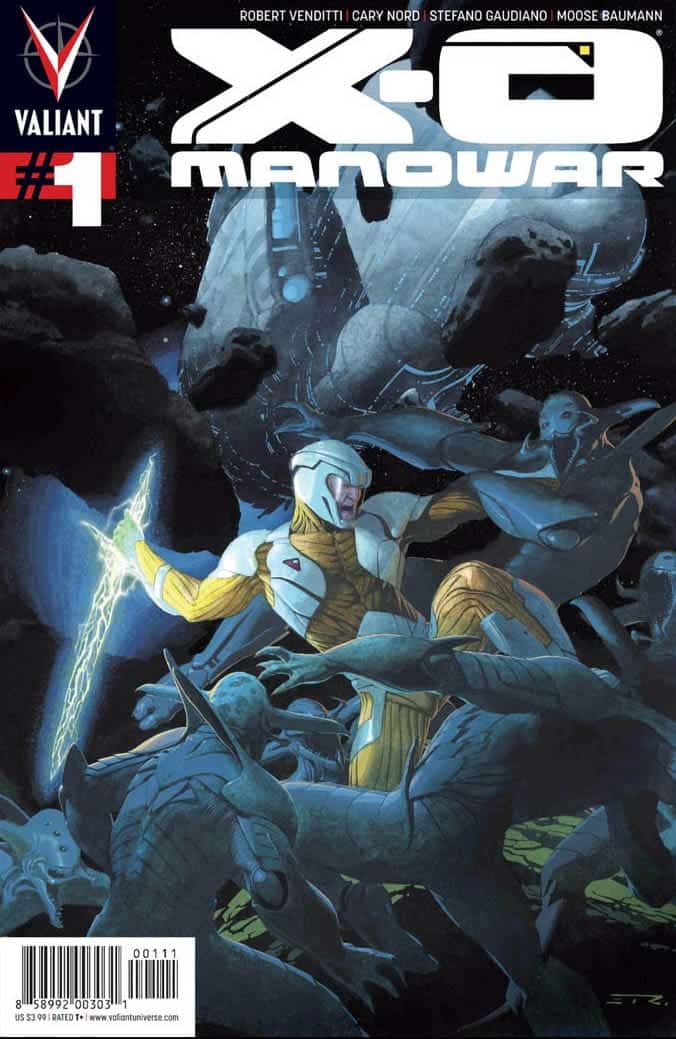 Essentially, a Visigoth warrior from 400 BC is captured by aliens, called The Vine. After years of slavery, he and his fellow Visigoth slaves revolt against their alien masters. Aric, Visigoth prince, obtains an ancient armor, sacred to the Vine, and uses it to free himself and return to Earth. Unfortunately for Aric, he arrives thousands of years too late in 2012. Aric has to deal with culture shock, alien invasions, and several crossovers in his still-ongoing run. X-O MANOWAR has fantastic action and a unique take on what initially felt like a traditional superhero book. Aric’s Visigoth point-of-view clashes severely with, well, anyone he comes in contact with, leading to very interesting scenarios.

X-O MANOWAR was Valiant Comics’ first relaunched title and featured the first appearances of other characters who would later get their own titles, such as the British assassin-for-hire Ninjak and aforementioned immortal soldier Eternal Warrior. Eternal Warrior is, coincidentally, the brother of Armstrong, and… 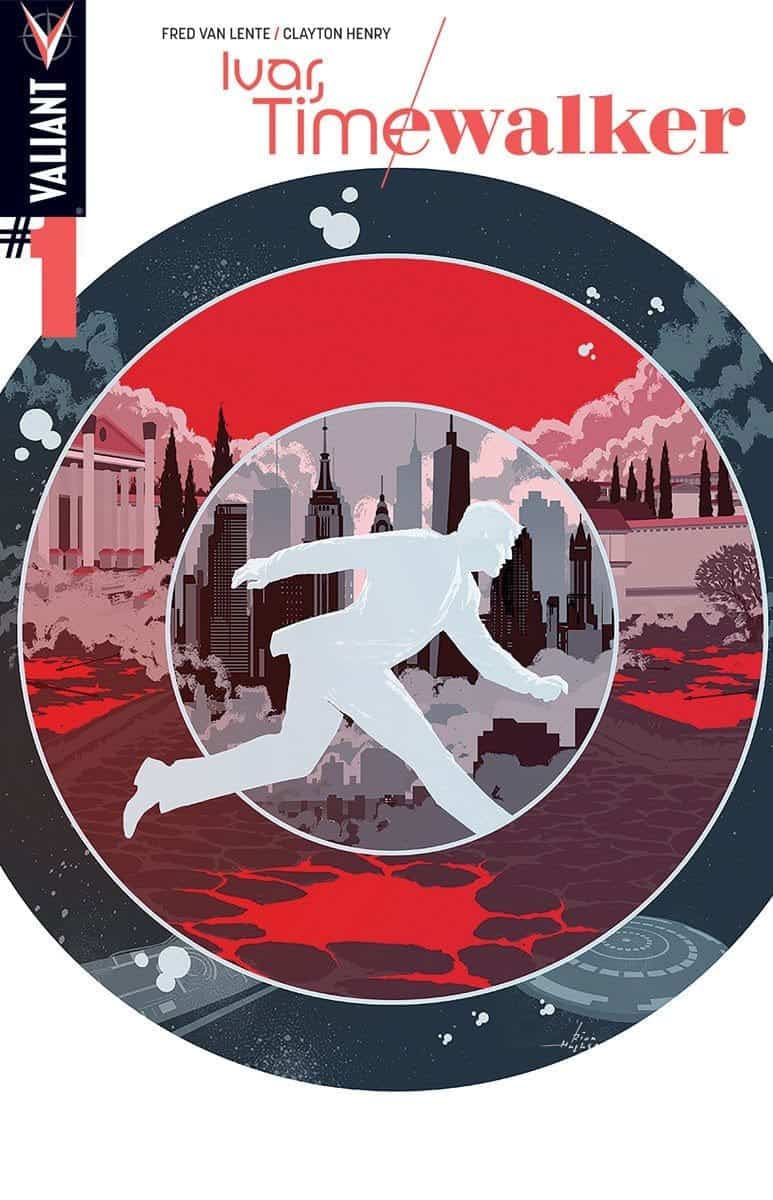 Look, you should read this comic if you like Doctor Who. It’s a clever comic about time travel. IVAR, TIMEWALKER comes from the team who brought you ARCHER AND ARMSTRONG, FRED VAN LENTE and CLAYTON HENRY. Ivar and his companion travel through time and fix problems, essentially. Like the Doctor, he has a wealth of solutions for any problem that he might find, mostly through his longevity (and access to future technology). Ivar rescues the inventor of time travel, physicist Neela Sethi, shortly after she discovers time travel and becomes the target of time-traveling assassins. From there, they are on the run through time and space. It’s great fun and very thrilling, while also offering looks into the past and future of the Valiant Universe. It’s ongoing and one of my current favorites. 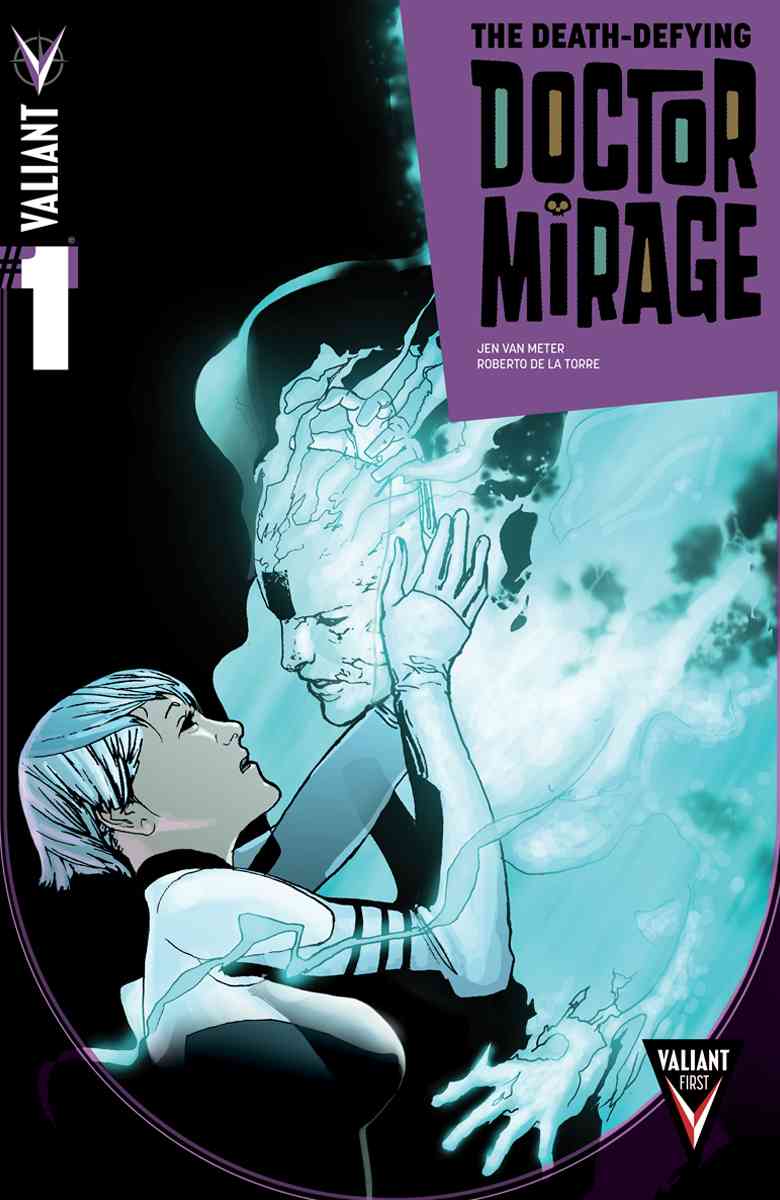 This is ostensibly a horror comic. Dr. Mirage is an occult investigator with the unique ability to speak to the dead—except for her deceased husband (and former partner). Dr. Mirage finds the potential opportunity to find her late husband and embarks on a quest through the astral realm. Jen Van Meter and Roberto De La Torre craft a great story that is touching, horrifying, and beautiful.

Valiant Comics have a multitude of other options I haven’t mentioned. If you like the X-Men, for instance, you might like HARBINGER, which concerns superpowered teens in similar X-type situations. The aforementioned Bloodshot and Ninjak have their own series that read like action movies; RAI features futuristic cyborg action. Valiant has something for any comic fan. They are able to remain singular while creating a lush universe with a lot of connections between titles, if that’s what you’re looking for. The crossovers are excellent, and BOOK OF DEATH looks to continue that trend in the coming weeks. I’ll continue to write about BOOK OF DEATH and other Valiant Comics titles in This Week in Valiant!

Miniseries and Events by Valiant Comics