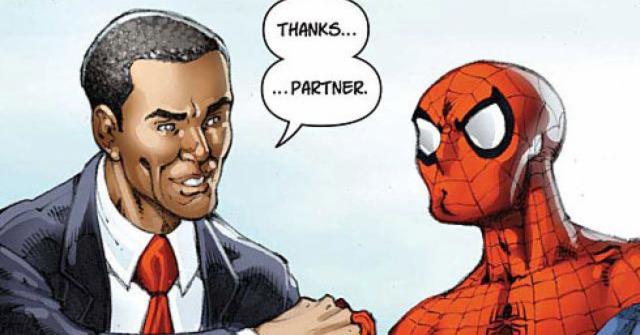 Throughout history, literature and film have been influenced by politics. From George Orwell’s 1984 to Terry Gilliam’s BRAZIL, pop culture can have a specific political bent. Yet there is a form of media that often gets overlooked — comic books. While superhero stories might seem too fantastic to carry political messages, they carry a special advantage.

Because comics are ongoing, they can give a political message over longer periods of time. They can also mirror events much closer to real time than films or books. Marvel has taken advantage of this in multiple decades, crafting stories that reflect the politics of their times. As politics continue to rage across America, let’s pause and take a look at five of Marvel’s most potent political stories.

While this story has just started as of this writing, its political implications are already poignant. There have already been multiple discussions about Marvel’s decision to make Captain America a Hydra agent. SECRET EMPIRE takes that premise to its conclusion, with Captain America gaining control of the organized heroes of Marvel, then allowing Hydra to take over. The most biting parts of the story have been multiple proclamations that only Cap can save them just before he betrays the world.

Regardless of how politics shape this story over time, it clearly states the danger of placing all your faith in any one person. It speaks out against a central tenant of fascism, and Marvel heroes doing battle against a man that, until now, symbolized America, is a strong sign in these times of daily protests. While it’s too early to fully examine this story, its early implications make a strong statement on modern politics.

Kamala Khan has been no stranger to social statements. As one of Marvel’s most prominent minority characters, this Muslim-American has stood against everything from racism to internet trolling. So it was no surprise that weeks before the 2016 election, Kamala spent an entire issue getting people to vote. It may have been for a politician in Kamala’s native Jersey City, but the message was impossible to miss.

READ: What do the Avengers think of President Trump?

Ms. Marvel finds people of all walks of life, who all give her reasons why they won’t vote. They don’t believe in the system, they can’t get time from work to go vote, they don’t believe in either candidate, they don’t feel their voice matters. People voiced almost all of these opinions in the 2016 election, as well as the belief that many young voters didn’t know enough to vote properly.

Instead, the issue has the teenage Ms. Marvel educating everyone on the importance of voting and doing so with expert knowledge. Workers are legally allowed to leave to vote, she says. Not voting means you don’t care enough to improve the system, she says. This story could’ve come across as a bad PSA, but it works because Kamala genuinely believes in what she’s doing, and her passion permeates the issue. While this story has an (arguably) happier ending than reality, this lone issue stands as a marker of the feelings that went into the 2016 election.

The oldest Marvel story on this list, THE KREE-SKRULL WAR sounds like it would be a reflection of the Cold War of the 1970s. However, it takes its inspiration from a much earlier, and perhaps darker, moment in American history. Earth is threatened by the war between two alien races.  Despite this, the Avengers take in Mar-Vel, the Kree hero and turncoat. The public is too afraid of aliens to allow this to stand, and the Avengers are branded as traitors. It also leads to the rise in power of Senator Warren Craddock, who launches a hate-filled campaign accusing the Avengers of being alien spies. Craddock also helps develop anti-alien technology to ‘weed out’ alien spies.

The heavy-handed references to Senator Joe McCarthy’s anti-Communist campaign are impossible to ignore. While McCarthy’s actions may have happened more than a decade before this comic’s publication, the methods are the same. Craddock forms the ‘Alien Activities Commission,’ a dead ringer for McCarthy’s House Un-American Activities Commission. His methods of accusing people of being spies at the slightest provocation, as well not allowing a way for the accused to prove they aren’t spies, mirrors the actual actions of McCarthy and those under him. While Craddock is eventually revealed to be an alien himself, it has merit that the methods he used to nearly achieve his goals came from Earth.

CIVIL WAR I and II

Several years progress between the two CIVIL WAR events, but both books focus on the same theme — security versus free will. In the first CW, the heroes battle over a registration program that would place their identities with the government. The second sees them fight over whether or not to use a new precognitive Inhuman to prevent crimes before they are committed. While the second story is less timely than the first, the idea was extremely political when first written.

CIVIL WAR I came out after the events of 9/11 when the government was increasing its monitoring of American citizens. The Patriot Act was in effect, and the government was monitoring all communication for terrorist activity. This brought up a lot of discussion about how much Americans were giving up for their supposed safety. CWI perfectly encapsulates that, as a superhero mishap causes a tragedy and leaves everyone wondering how much good heroes really do without supervision. While it was somewhat heavy-handed, the symbolism between the emerging factions battling each other was clear. It also raised the question of how much authority government should have and whether or not so much power should belong in anyone’s hands. CIVIL WAR II sadly doesn’t do as well with these ideas — it merely rehashes them in a more sci-fi plot. Still, it does get readers thinking.

SECRET INVASION deals with the Skrulls revealing an undercover scheme to overthrow Earth by posing as its greatest heroes. As with CIVIL WAR I, it came out in the post-9/11 world and captured the paranoia many Americans were feeling at the time. A major tragedy had rocked the nation, a terrorist group was taking responsibility, and it became impossible to know who to trust.

SECRET INVASION takes all that into the story, as trusted images of American heroes shapeshift into invading aliens. There is no way of knowing if anyone is actually who they say they are. It took all the fears Americans had about their neighbors and friends and turned the knob up a few degrees. You’re worried about people being terrorists? We’re worried if they’re even human. It managed to showcase the feelings of the time while still creating an original, memorable story.

While movies and literature will always have great political statements, you don’t have to read War and Peace. You can just head down to your local comic store and test the waters of politics.