BRITANNIA introduced comic readers to the world of Ancient Rome through the eyes of the Centurion detective Antonius Axia. Peter Milligan and Juan Jose Ryp’s acclaimed series was an exciting mix of Sherlock Holmes, GLADIATOR, and GAME OF THRONES. Luckily for us, BRITANNIA: WE WHO ARE ABOUT TO DIE has recently been announced. What we know so far is that the new issues will revolve around the gladiatorial ring. An injured Apollo is seen coming from one of his temples, and the Vestel Virgins are accused of upsetting the gods. Antonious Axia must use his incredible detective skills to find the link between a new gladiator protagonist and the mysterious appearance of the sun god.

Here are the five things we want to see in the new series. 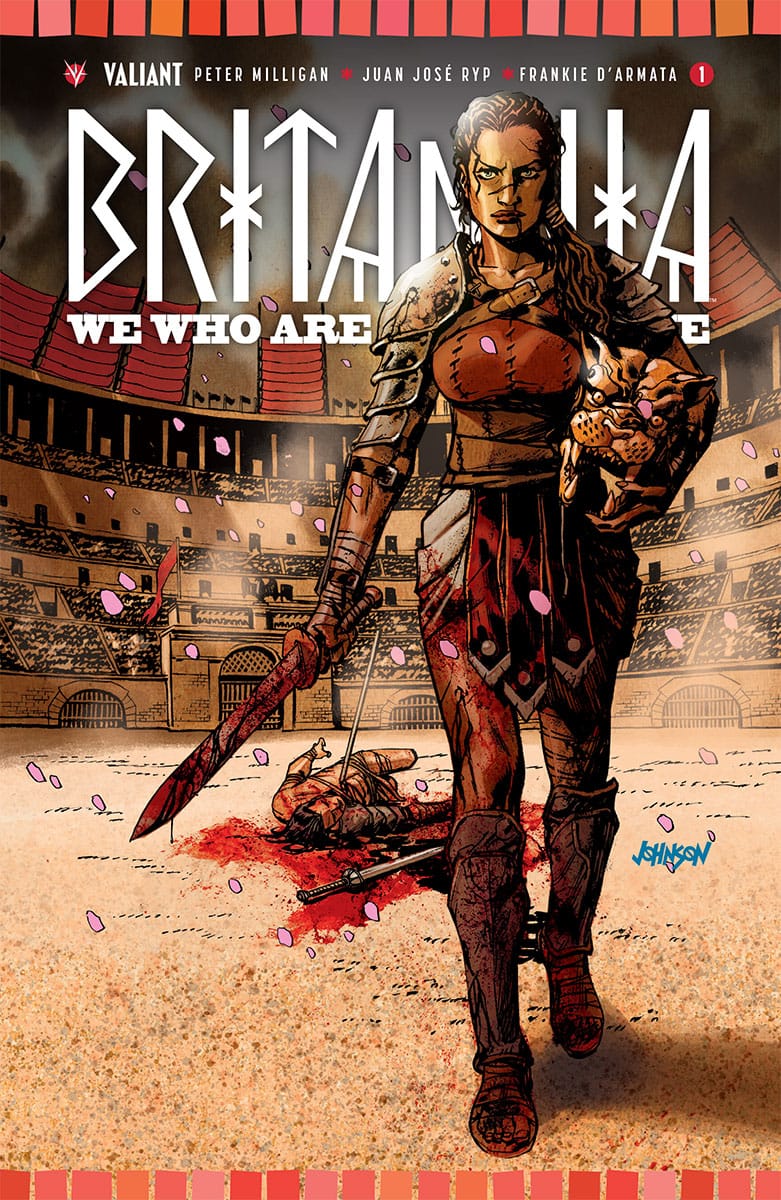 Nancy Drew would be much more interesting if she were decapitating her foes with a broadsword. After being exposed to the magical Codex, Antonius Axia gains similarly incredible deductive abilities. He can read minute facial ticks and rationalize his way through countless supernatural phenomenon. One of the best sequences in the first volume involves him conducting a Roman-era autopsy on soldiers who have died mysteriously in battle. However, the first few issues spend so much time introducing the characters that much of the mystery takes a back seat. I would love to see the new volume go for a complete start-to-finish detective story that incorporates all of the deductive wisdom someone from this time period could muster.
READ: Interested in the World’s Greatest Detective? Learn all about The Future of THE BATMAN?

2. A Continued Appreciation for Historical Accuracy

This series is not exactly the MAGIC SCHOOLBUS, but it does try to be as historically accurate as possible. Each issue featured a short essay by a real historian to give the events some context. In most cases, I read comic books so that I do not have to learn, but I found these short papers enthralling. Similar to how GAME OF THRONES makes Silly Putty out of the War of the Roses, BRITANNIA takes real historical concepts and contorts them to fit into its supernatural narrative. The essays were great for background, and they gave the already interesting story another layer. (BRITANNIA was a real place and not just a board game). I personally have a new found zeal for history and will soon be acquiring through entirely legal means applicable episodes of PBS’s WISHBONE to fulfill my lust for ancient knowledge.

3. Deeper Dives into the Lives of Vestal Virgins 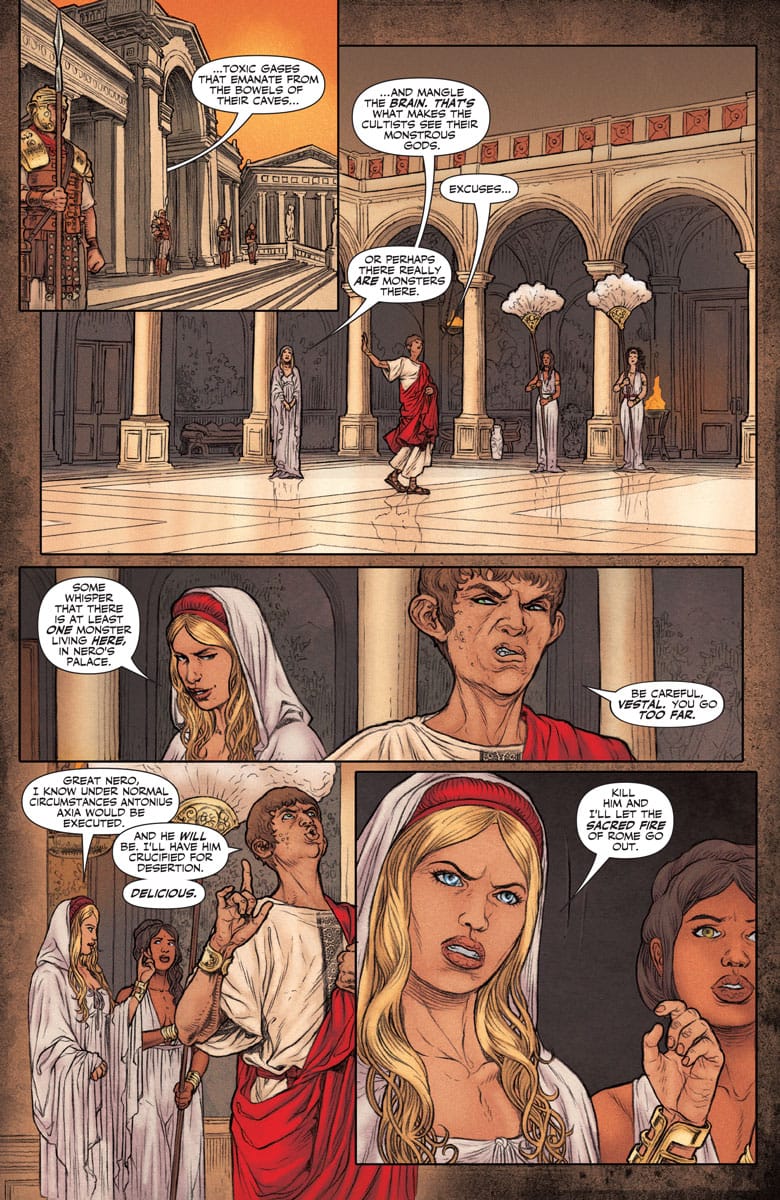 The most interesting aspect of the first volume was the Vestal Virgins. These women were given enormous power and responsibility in a time when most women were not. From what I could gather, Roman society was so misogynistic it made the MAD MEN office look like Themyscira (I’m pretty proud of that comic book, TV, and ancient mythology reference all in one). The Vestal Virgins held an important role in Roman society, almost equal to the emperor. The first volume explores this political struggle, as well as the magic of the Virgins themselves. The reader is never truly sure how much of their power comes from the gods and how much comes from their shrewd political machinations. These enigmatic figures should take a front seat in future issues.

LISTEN: Curious about other powerful women in comics? Here is Episode 87: Celebrating the X-Men Women in a Post-Trump World.

4. Let’s Get to Know His Sidekick More

Every detective has a great sidekick. Sherlock has Watson, Batman has Robin, and The Hardy Boy in the Green Sweater has The Hardy Boy in the Red Sweater. In the first volume, we are introduced to Bran, a slave from Brittanica and Antonius’ best friend/partner. Like Watson did for Sherlock, Antonius needs a sounding board to filter through his ideas. Bran has a complicated inner struggle that is severely downplayed. 1) His best friend and partner is his master, 2) He is fighting against what were once his people, and 3) He stated that he chose not to buy his freedom (his reasoning being for tax purposes). These ideas are all introduced, but none of them are fleshed out. Hopefully, the next set of issues will allow these conflicts to come to light. 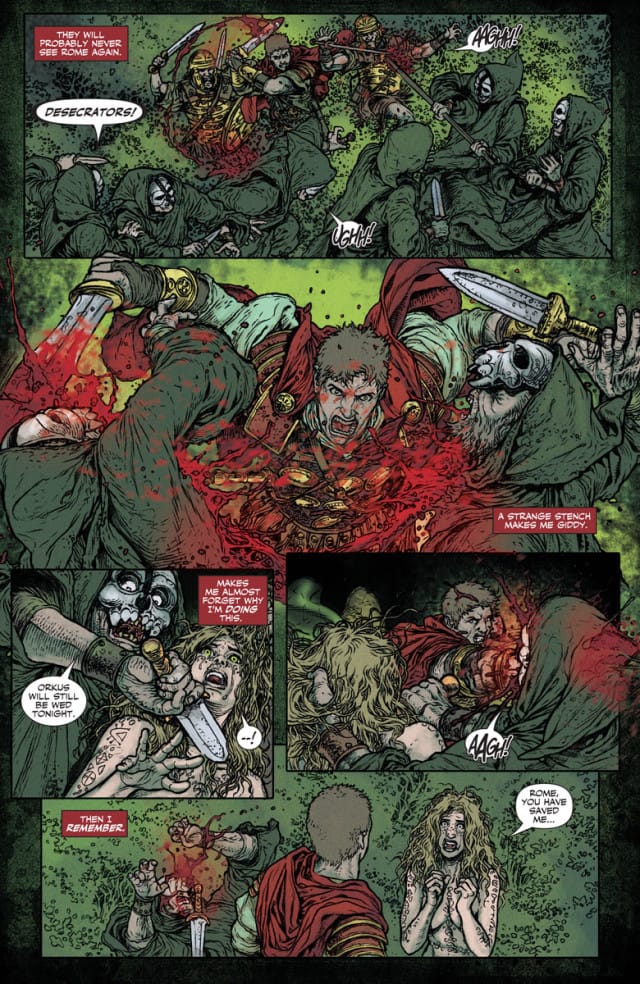 BRITANNIA was the most bad-ass piece of historical fiction I have ever seen. Antonius fights demons, cults, and mangled up Roman soldiers in bloody, gut spewing battles. These brawls are spectacularly illustrated thanks to the insanely talented Juan Jose Ryp. As we saw in the first arc, Juan Jose Ryp’s detailed art style is perfectly suited to rendering realistic and grotesque supernatural beings. The next volume is set to feature some incredible gladiator battles, and I hope these villains get the same gory supernatural spin. Antonius slashing through a hoard of haunted gladiators is too good of an opportunity to pass up.

BRITANNIA: WE WHO ARE ABOUT TO DIE #1 is coming April 26th. What do you want to see in the next Britannia arc? Tell us in the comments below!