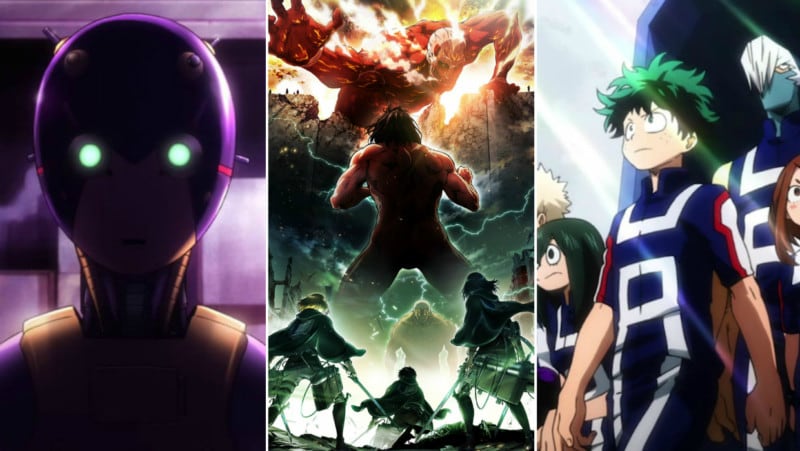 It’s that time of year again. Another anime season is drawing to a close, and you’re looking for your next fix. Well, we here at ComicsVerse have done the heavy lifting for you. We’ve dived into the pool of spring anime to fish out five shows we think will be worth watching. From anime featuring beloved characters, to two shows in their second seasons, to interesting newcomers, spring 2017 looks good for anime fans.

ASTRO BOY, a series starring a plucky android named Astro created by “father of manga” Osamu Tezuka, first got published in 1952. The first run of ASTRO BOY solidified the aesthetic and feel of what we know as manga and anime today. Known as Astro Boy in the west, Japan calls the character Mighty Atom. This brings us to ATOM: THE BEGINNING, a prequel to ASTRO BOY written and illustrated by Tetsuro Kasahara, with story help from Makoto Tezuka and Masami Yuki. This 2014 manga (and soon-to-be anime adaptation) follows a very different incarnation of Astro Boy. No longer a kawaii boy, Atom sports a slick, robot teen look to match his more mature name, and his whole body feels decidedly more “superhero” (check out those hefty fists) than Astro’s character design.

ATOM: THE BEGINNING follows two robotics geniuses, Umataro Tenma and Hiroshi Ocahnomizu. Dreaming of what the future should look like, Umataro and Hiroshi decide to build a robot, each with differing ideas for what humanity truly needs: Do they need a godlike figure to enter this post-disaster Tokyo, or merely a friend?

ATOM: THE BEGINNING looks promising not only due to its futuristic plot and modern take on an iconic character, but because of the powerhouses that are behind the project. Animated by Production I.G. (GHOST IN THE SHELL, PSYCHO-PASS), OLM, (1997’s BERSERK, POKEMON) and newcomer Signal.MD, the staff jam-packs seasoned veterans of the industry and names associated with beloved properties. The series will be overseen by Chief Director Katsuyuki Motohiro, who also held the position of Chief Director for the critically acclaimed PSYCHO-PASS and animated PSYCHO-PASS movie. With an eye-catching plot, amazing studios producing it, and an experienced director at the helm, ATOM: THE BEGINNING is shaping up to be a spring 2017 anime you won’t want to miss! 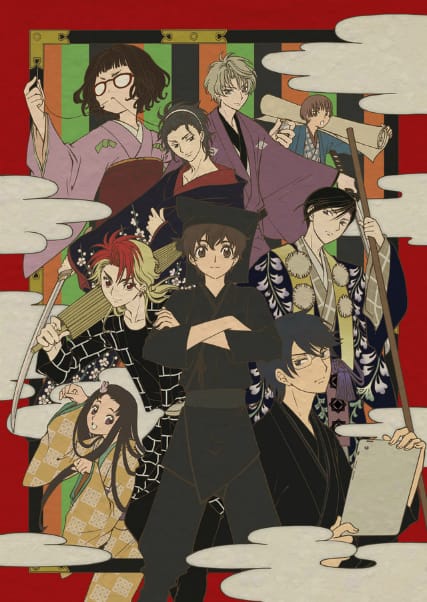 For the last year-plus, nothing has stolen the stage of anime drama quite like SHOWA GENROKU RAKUGO SHINJU. The series follows the dramatic storyline of two young men undergoing training in the Japanese art of Rakugo. It also follows their lives beyond it and opens a window to the west, not only to the art of Rakugo itself, but to a subtle, epic, and emotional tale as timeless as a Greek epic. As breathtaking as this show was, however, like every good story, it must reach its destined and satisfying end. After this season, RAKUGO will be no more.

READ: See how your picks for best anime of 2016 compare to anime and manga editor Alexander Wong’s list!

But worry not, fellow seinen and RAKUGO SHINJU enthusiasts, for not all is doom and gloom. Studio Deen, the team behind SHOWA, has a new show coming out next season that also looks to shed light on an art form that is rarely done outside of Japan: Kabuki. Like Rakugo, Kabuki is a traditional performative art form native to Japan that was developed in the 17th century. Unlike Rakugo, however, Kabuki was traditionally only performed by women, and uses a mixture of music, drama, and dance to tell its stories. KABUKIBU! takes this art form to modern day as the show follows 15-year-old protagonist Kurogo Kurusu whose love of Kabuki drives him to create a Kabuki club at his high school.

While KABUKIBU! probably won’t be as heartbreaking as SHOWA, as the struggles of trying to make a Kabuki club don’t tend to make for high stakes drama, it looks like it will be taking the same care to showcase a love for an old Japanese art form through a beautifully animated story. Maybe after two seasons of RAKUGO SHINJU, this lighthearted high school show is just what you need to brighten your spirits, all while still filling your itch for Japanese culture.

KABUKIBU! debuts April 7. You can also watch it streaming on Amazon’s Animestrike service. 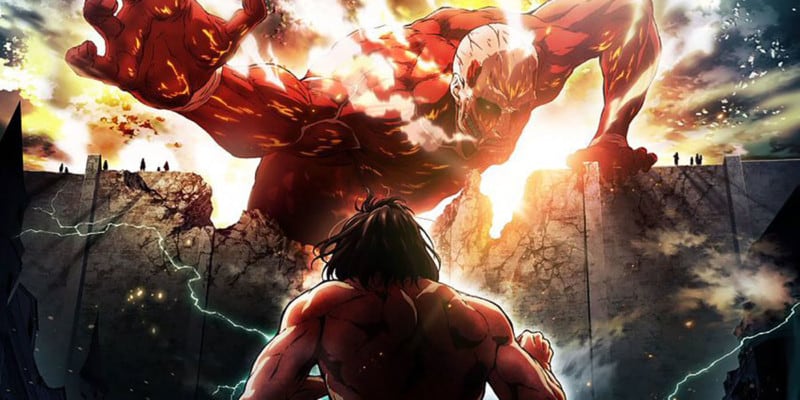 If any show on this list could go without an introduction, it would be ATTACK ON TITAN. This manga-turned-anime took the world by storm in 2013. ATTACK ON TITAN ushered in a whole new fanbase for anime with its gruesome action, beautiful animation, and gripping story. Four years after the first season aired, ATTACK ON TITAN is finally almost back. The series, which was created by manga author and illustrator Hajime Isayama, follows Eren Yeager and his childhood friends on a journey from relative peace to the front lines of humanity’s battle against giant man-eating beasts called Titans.

ATTACK ON TITAN’s first season concluded with an epic battle between the Survey Corps and the feared Female Titan (no major spoilers here)! Additionally, we saw a scene showing a Titan inside the wall. The show’s second season will pick up right after the events of the first, with a “horde of Titans” approaching Wall Rose. ATTACK ON TITAN: Season 2 will likely not only have the same action that you love, but will contain new mysteries and new Titans to battle. If you can only one watch one anime this season, it should be this series.

ATTACK ON TITAN’s second season airs on April 1. You can watch it on Crunchyroll, Funimation, or Anime Lab (exclusive to Australia and New Zealand).

MY HERO ACADEMIA is another awesome anime heading into its second season. Studio Bones, known for its great action animation and modern classics like FULLMETAL ALCHEMIST: BROTHERHOOD, dishes out a new season of the superhero series following Izuku Midoriya and his fellow classmates at U.A. High School. Last season we were introduced to the powerless Izuku. Izuku worked to find his place in a world where 80% of the human race has special powers (or quirks). Now, with Izuku having “acquired” a quirk (no spoilers here!) and experienced a few life or death situations, MY HERO ACADEMIA: Season 2 seems set to dive straight into the manga’s Sports Festival Arc, where we will see Izuku and the other heroes-in-training face off against one another in various events put on by U.A.

As seen in the trailer above, it looks like MY HERO ACADEMIA’s second season will definitely be a classic tournament style arch, with lots of familiar faces facing off against one another and improving their skills as heroes. With so much room for the characters to grow and an interesting new setting, MY HERO ACADEMIA’s second season seems set to just as fun and exciting as the first.

MY HERO ACADEMIA: Season 2 airs April 1. You can watch it on Crunchyroll, Funimation, and Hulu.

READ: Disappointed by ATTACK ON TITAN‘s live-action adaptation? Check out our analysis on why anime sometimes doesn’t transition well to film!

5. WHAT DO YOU DO AT THE END OF THE WORLD? ARE YOU BUSY? WILL YOU SAVE US? 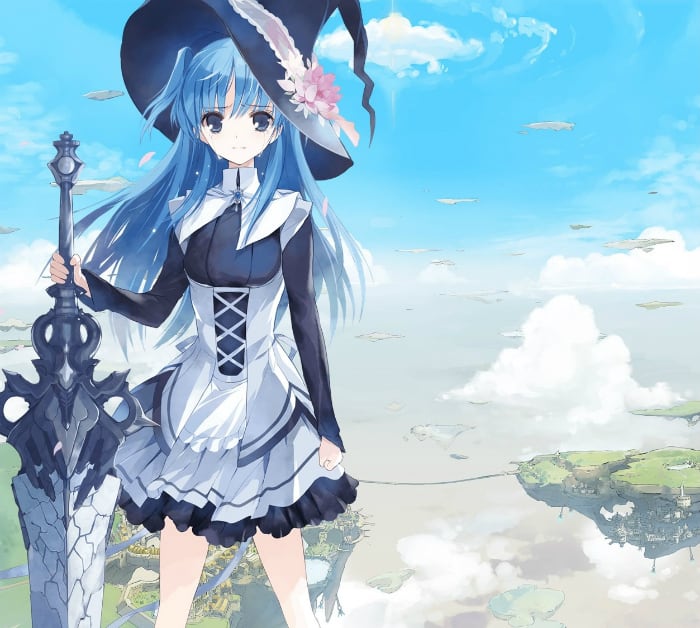 No “what anime to watch” list in 2017 would be complete without one series about transportation to another world. No trend seems nearly as prominent these past few years than the trope of a lone man or boy who finds himself transported to a fantasy world. Be it a satire of this trope like KONOSUBA or RE: ZERO, or a straight up fanboy fantasy such as NO GAME NO LIFE, no shortage of these stories in recent years exists. While on the surface, Studio Satelight’s WHAT DO YOU DO AT THE END OF THE WORLD? (or SUKASUKA) appears to be no different, but it looks like it’s taking a refreshing approach to the trope.

This light novel turned anime follows a young man named Vilem Cumesh. Vilem is the last human on Earth 500 years after mysterious beasts wiped out the rest of humanity. As a result, the surviving races have fled to floating islands in the sky to escape these beasts. A small number of Leprechaun girls who are able to wield ancient weapons protect them there. It is here in the company of these girls that our hero awakens from 500 years of frozen slumber to find a new purpose in life.

READ: Are you a fan of Rooster Teeth’s anime-inspired show RWBY? Find out why the show’s symbolism might be overkill!

Vilem grows tired of fighting. He finds he no longer has the strength to do so. This is exactly what makes SUKASUKA worth checking out this season; it breaks the mold of a regular fantasy world harem anime.

Instead of becoming the perfect husband for a gaggle of cute magical girls, Vilem nurtures and cares for these Leprechauns. Even as the father they never had, he struggles to come to terms with his new reality. Having left someone dear to him in the past, it is in his overseeing of these fighters, and experiencing the pain of waiting for a loved one to come back from battle, that Vilem and his new companions set off on a journey to learn what it means to be family. Most importantly, they discover what is ultimately worth protecting to them. SUKASUKA, while from a fairly new mangaka, studio, and team, seems to be the wild card to watch out for.

WHAT DO YOU DO AT THE END OF THE WORLD? ARE YOU BUSY? WILL YOU SAVE US? airs on April 11.