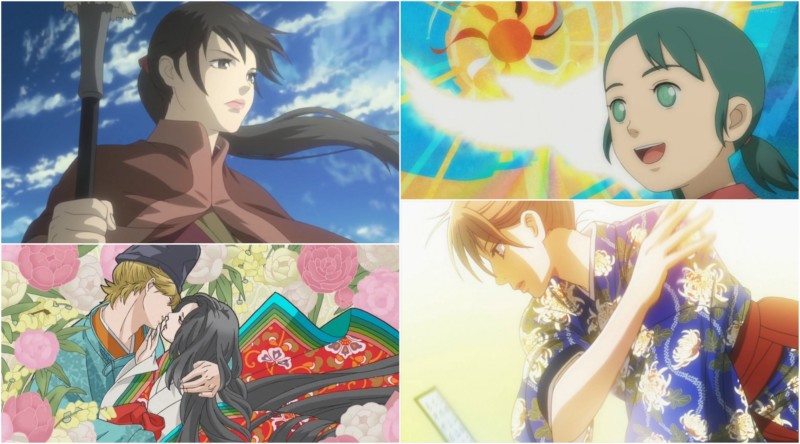 Wondering what to watch between episodes of ATTACK ON TITAN and MY HERO ACADEMIA? Looking for something off the beaten path? Here are five awesome anime you may have overlooked or never even heard of.

This coming of age anime takes place at a Taisho period hot spring inn called Kissuiso. The show revolves around 16-year-old Ohana Matsumae. The premise of the series goes like this: Ohana’s mother elopes with her boyfriend in the middle of the night to escape from debt and sends her to live with her grandmother, Sui Shijima, who is the revered owner of Kissuiso. However, this isn’t some happy family reunion. While she is at the inn, Sui informs Ohana that she must work in order to stay. Having never worked in a professional setting before, Ohana is out of her element. This bothers most of her peers at the inn, since they are working on advancing their careers and she gets in the way. As a result, they are reserved and even antagonistic toward Ohana.

HANASAKU IROHA is ripe with beautiful traditional Japanese visuals. These visuals work surprisingly well with the show’s modern, slice-of-life story. The anime’s colorful cast of characters matches this combo, driving the storyline forward in fun and sometimes bizarre ways. For example, Ohana meets an odd novelist writing a historical erotica based on her who ends up kidnapping her.

In the end, Ohana’s strong will and kind nature allow her to power through the difficult and strange encounters she has with the bad-tempered people around her. As the series progresses, it is incredibly satisfying to watch Ohana figure out how to navigate the inn’s strict professional atmosphere and her new, complicated life.

READ: Take a look at what anime you should look out for this spring!

This pseudo-sports anime focuses on the relationship between Chihaya Ayase and her friends and karuta, a card game based on the poetry anthology Ogura Hyakunin Isshu. “Hyakunin isshu” roughly translates to “one hundred poems, one poet each.” Fujiwara no Teika, a Japanese poet, compiled the anthology. Two people play the game by arranging the cards between them, half of the deck facing each of them. An announcer reads the first half of the poem and the players must claim the card with the second half of the verse. They race to either knock the card out of the arrangement or have their hand on it first.

Onto the plot! As a young girl Chihaya had no aspirations of her own. But because of her enthusiasm and kindness, she supported her older sister’s dream of becoming a model. This changed, though, after she met Arata Wataya. After defending Arata from bullying, Chihaya and Arata went back to his house to practice karuta together. While playing against Arata, Chihaya got hooked on the game and decided to play it competitively. She becomes separated from her friends as they grow up, but hopes to reconnect with them through karuta. (Spoiler alert: she does!)

What’s great abut CHIHAYAFURU is not only its intense scenes of competition but also its realism. This is the story of three children whose families don’t or can’t support them the way they need to be supported. In Chihaya’s family, her sister takes precedence over her as a model. Arata’s family is very poor and he seems to be neglected. And Taichi is very well attended to, but to an almost unbearable degree. The pressure of his parents’ expectations leads him to cheat and bully others, at least as a child.

Karuta helps lift the main characters out of their negative family situations and bring them together as friends. Their passion for the game also helps them discover themselves and what they want in life, not just what their families want. In short, CHIHAYAFURU is an intense drama that will have you deeply invested in each of its main characters.

CLICK: MISS KOBAYASHI’S DRAGON MAID is cute, but that’s not all there is to the series! Check out all the reasons why you should watch the show!

Speaking of Ogura Hyakunin Isshu, here is an anime based on the anthology itself! UTAKOI is a series of romantic short stories inspired by the one-hundred poems in the anthology, depicting how the poems came to be. The narrator of the anime is a younger and more handsome version of Fujiwara no Teika, at least in comparison to his portraits. Teika was not only a Japanese poet, but also a critic, calligrapher, novelist, anthologist, scribe, and scholar of the late Heian and early Kamakura periods. The “Ogura” in Ogura Hyakunin Isshu comes from Mount Ogura, where Teika lived while he compiled the anthology.

Even though the anime is based on historical texts, it is not accurate to its origins and doesn’t pretend to be. It uses anachronisms, like having Teika narrating from a beach in modern times, to humanize these historical figures. Plus, people of the time period would have considered many of the romantic interactions to be wildly inappropriate. In any case, through its humor and steamy romances, the audience can experience traditional Japanese literature through a fun, modern lens.

UTAKOI beautifully blends humor, the traditional Japanese aesthetic, and sensual romance. The only downside to this series is that it’s so short (much like Japanese poetry!).

LOOK: Have you ever done anything because of anime? Something embarrassing? Something cool? See what some of our writers have done in the name of anime!

MORIBITO: GUARDIAN OF THE SPIRIT

MORIBITO: GUARDIAN OF THE SPIRIT is a historical fantasy anime based on the first book in a series of Japanese fantasy novels by Nahoko Uehashi. The anime follows Balsa, an extremely skilled spear wielder. She is a 30-year-old woman who became a wandering warrior and bodyguard-for-hire after fleeing her home country due to her father being wrongly accused of a heinous crime. In order to atone for her guardian having to kill eight people when she fled as a child, she has vowed to save eight lives in return. As a result, she refuses to kill those who attack her. At the start of this series, she has already saved seven lives.

MORIBITO centers on Balsa and her role as the bodyguard of Prince Chagum. The prince’s father, the Emperor, wrongly believes that an evil spirit prophesied to bring drought for years is possessing Chagum. The truth is the exact opposite: Chagum is hosting the egg of a water spirit that will bring prosperity. If the spirit is not born, then disaster will befall the country. To make matters worse, not only is the Emperor sending assassins after Chagum, but the evil spirit the Emperor fears is actually pursuing Chagum to eat the egg and cause drought.

The series is full of action, adventure, and complex characters, with my favorite being the main character, Balsa. She is a badass Wonder Woman-type character with a tragic origin story and a strong moral compass. She takes center stage and her enemies never look down on her, at least not when her spear is in their faces. If you like beautifully animated and well-choreographed fight scenes, you’ll love this one.

Available on: Hulu and VIZ.

READ: Oh. My. God. You have to watch HUNTER X HUNTER! It could completely change your life.

Last on the list is ERIN. This anime is also inspired by a Japanese novel series written by Nahoko Uehashi. It follows the growth of a young girl named Erin who is a beast tamer in a world of wild and wonderful fantasy creatures.

The series begins with Erin as a 10-year-old living alone with her mother in a small village. Her mother So-yon is from an ancient clan called the Mist People, identified by their green hair and eyes. This makes both Erin and So-yon stand out as outsiders, leading to people discriminating against them. One day, the Grand Duke’s Touda (a dragon-like creature) dies, and So-yon is blamed and sentenced to death. During the execution, Erin tries to save her mother but is swept away by the river in her attempt. Eventually, Erin is found and adopted by a beekeeper and then sent to a school where she learns to care for a variety of animals.

Even before she is sent to the school, Erin displays a phenomenal ability to connect with and care for beasts. Her incredible abilities lead to her getting caught in a war between two kingdoms, a tense political atmosphere she must navigate while staying true to herself. This anime is great because it’s not only a story of Erin’s growth as a person, but also of political intrigue and tough moral decisions.

On top of that, Erin is an interesting and lovable character. She is genuinely caring and compassionate, especially towards animals, yet fiercely protective at the same time. It’s also really cool to see her survive high-stakes experiences with her incredible skills as a sort of “beast whisperer.” Overall, ERIN is a compelling and uplifting story of overcoming adversity which you should definitely check out.