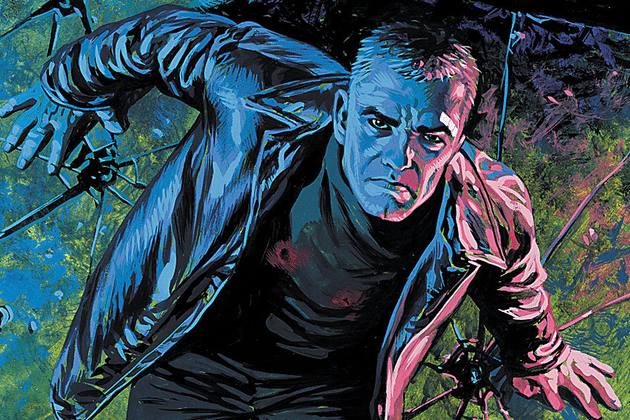 Noir. It brings to mind many images: dark, crime-ridden streets and alleyways, femme fatales who could either kiss you or kill you, and conspiracies that go all the way to the top. Have I caught your interest? Well then, why you don’t step into my office?

Today’s noir comics are thriving, taking influence and inspiration from the pulp magazine precursors to comics, the lurid crime comics of the 1950s, the science fiction and superhero comic genres, and of course classic film noir. When melded together, these influences form something that is uniquely “comics.” Here are five different noir comics that will make you close those venetian blinds and get reading.

This won’t be the first time the names Ed Brubaker and Sean Phillips appear on this list and for good reason; they are true masters of the craft. SLEEPER may very well be their masterpiece.

A book that reads as John Le Carre with powers, SLEEPER follows Holden Carver, a man burdened with abilities that are the source of his personal misery. In return for a cure, Carver agrees to go undercover at the criminal organization of the super-villain Tao. When his handler and only link to the outside world falls into a coma, Carver is left out in the cold and must do whatever it takes to maintain his current identity, even at the cost of his old one. 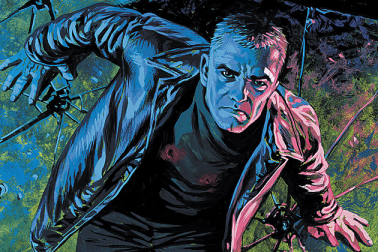 SLEEPER features many of the trademarks of great noir, especially that razor thin line between the heroes and villains and the mentally broken protagonist. Carver is an interesting character, wary of the mind games both sides of the law are playing, and looking for any way out.

Although SLEEPER takes place in the Wildstorm Universe and features a prequel book titled POINT BLANK (also written by Brubaker), it works completely as a standalone comic with a beginning, middle, and end.

Written and Drawn by David Lloyd

David Lloyd might be best known for drawing V FOR VENDETTA, but on his noir graphic novel KICKBACK, Lloyd does double duty, writing and drawing a compelling tale about a crooked cop tormented by daily nightmares from his past and his quest to change his ways. 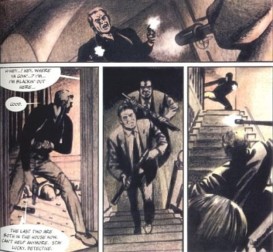 Lloyd’s art is breathtaking here, using heavy shadows and muddy colors to give the book a dream like and heavy quality. This magnifies our protagonist Joe Canelli’s struggle to deal with his past, his recurring nightmares, and his desire for redemption.

Although critically acclaimed, KICKBACK was not a massive sales success upon its release. Unfortunately this means it’s currently extremely hard to find in both print and digital. At one point it was available on iTunes, but my current search has proved fruitless.

Written by B. Clay Moore 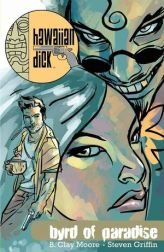 If that doesn’t wet your noir whistle, then take a peek at the some of the most gorgeous and atmospheric comics art ever created. Post-war Hawaii is a setting ripe for comics, and Moore takes full advantage with some crips writing and fun characters that might not reinvent the wheel, but are a hell of a good time. Available in three limited series with a fourth still in the works, this is one book that will haunt your hula filled dreams. 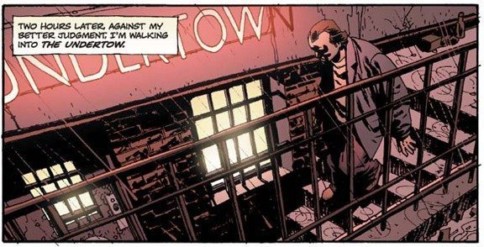 The first volume of Brubaker and Phillips’ excellent crime anthology series, subtitled Coward, focuses on Leo, a career criminal with a penchant for not taking risks. When he gets offered a job that’s too good to pass up, Leo finds himself in trouble. Although each volume tells a separate story, Brubaker applies the connective tissue of a superhero universe to crime. There’s the bar for all the excons, the dynastic families of criminal enterprise, and the sinking feeling that nobody ever really changes. Phillips’ artwork is as grimy, murky and run down as the characters.

Yes I know what you’re thinking: this is a Batman book! But Year One holds the DNA of a noir book far more than a superhero book. Who are the dual protagonists of BATMAN YEAR ONE? Bruce Wayne and his mission to take on the mantle of the Bat are indeed important, but even more central to the story is Jim Gordon, the only honest cop in Gotham City. 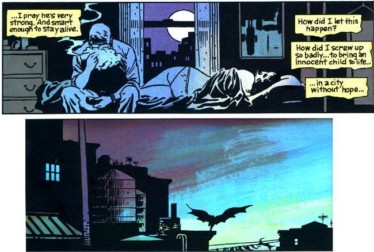 Great noir dialogue frequently has a rhythmic, lyrical quality to it. Frank Miller’s dialogue embraces this concept to the extreme. Take, for example, the first line of dialogue from the book: “Gotham City. Maybe it’s all I deserve now. Maybe’s it my time in Hell.” The bitterness, the hopelessness—it’s all there. David Mazzuchelli’s artwork highlights the grime of Gotham City: the rain pouring down on the decaying slums of the city, the rumpled coat of James Gordon’s beaten figure, the seedy neon signs along the street.